Sanctions against Russia in the form of a boomerang. Who understood it, and to whom it is difficult to reach

March 8 2014
124
For speculative groups in the securities and currencies market today is a real expanse. Any collapse in the prices of shares of certain companies, any rise in the rate of a certain world currency can be easily attributed to events that are one way or another (directly or indirectly) related to problems in Ukraine. News that the Crimean parliament appealed to the Russian authorities with a request to consider the possibility of Crimea joining the Russian Federation as a subject, it was said that the shares of Russian companies should certainly go down. Like, judge for yourself - only economic laws work, no speculation - Crimea declares a possible withdrawal from Ukraine, this will automatically put additional pressure on the Russian economy, and the Russian economy does not look monolithic and stable - here you have a drop in quotations, a fall in the ruble, enormous Russia's losses ... Of course, of course - everyone took it and believed that there was a clean economy, that there was no question about any speculations in the securities and currency markets ...


The maxim about the device of the modern economy in such a way that only Russia should lose from the Ukrainian political and economic conflict, are ready to repeat the Western "partners" as a mantra so that Russia can not only be pricked, but also earn good money from it (both economically and economically). political plan). One of these “partners” is Polish President Bronislaw Komorowski, who did not bother and counted that Russia daily loses about 70 billion rubles from “interfering in the internal affairs” of Ukraine. At the same time, Mr. Komorowski notes that such more than substantial losses are a sobering tool for Vladimir Putin. Like, if Putin counts what the losses of the Russian financial system are today, then he will certainly “retreat from Ukraine”. Apparently, Mr. Komorowski was unaware that the position “Russians don’t abandon theirs” (sorry for pathos) is at least based on questions of some financial and quoting losses ... Or does Mr. Komorowski seriously believe that when liberating the territories of the Soviet Union occupied by the Third Reich, when the same Poland and the whole of Europe were liberated from fascism during the Second World War, the USSR was weighing the economic aspects of this process? ... from it the difference in mentalities - in all its glory.

Against this background, the United States and the leading circles of the European Union are threatening Russia with economic disasters. At the same time, Washington, London and Brussels will promise these cataclysms to promise to “click” themselves. For the time being, Western officials are limiting themselves to the fact that they are freezing the funds of “some Russian officials,” which relate to, quote: “to destabilize the situation in Ukraine.” The message is simply amazing: it turns out that it’s not the radicals who are engaged in destabilizing the situation in the image and likeness of Yarosh and other Muzychko, not the leaders of the “opposition” who entered Ukrainian government offices in populist and ultranationalist slogans, not the West, which itself has been engaged for a long time political instigation in Ukraine, but still Russian officials ...

So, the US and the EU are going to freeze the accounts of some representatives of the bureaucratic apparatus of Russia. Whose accounts exactly? - while silent. Apparently, in the Congress they make up another “list of a'la Magnitsky”, which should “sober up Russia”. In addition to freezing accounts, it is unknown what officials the West is going to suspend a number of trade and economic agreements, as well as to reduce investment in Russia. 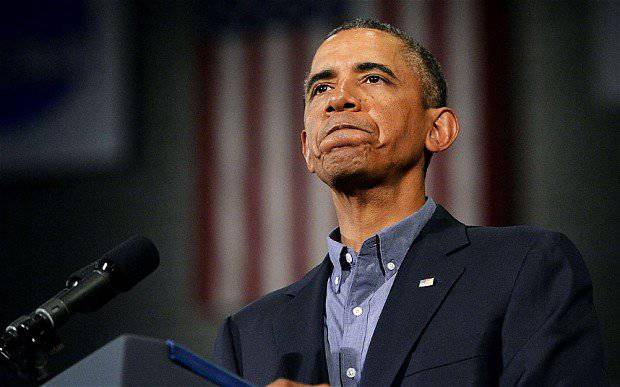 It should be noted that not all foreign "partners" are eager to support the introduction of economic sanctions against Russia. Many of these same partners are well aware that the United States calls for financial “flogging” of Russia - this is the banal desire of the United States to preserve its face, as the face of the navel of the Earth - and the main active force of the unipolar world. In the same Germany, 25% of energy imports for which are Russian, in confusion. After all, if we support the United States and begin not only to threaten the Russian Federation with sanctions, but also to impose them, this can be a crushing blow to the economy of the FRG itself.

Head of IFO (Institute for Financial and Economic Studies) Hans-Werner Sinn (Germany) on the pages of the electronic version Deutsche Welle declares that if Germany imposes sanctions against Russia, it would have a very negative impact on the German energy system.

In his opinion, the new German energy policy in such a situation may even be under threat. Recall that according to the new energy policy, the Federal Republic of Germany intends in the medium term to reduce the percentage of use of nuclear energy, and increase the percentage of hydrocarbons (in particular, Russian gas). Zinn harshly criticized the introduction of EU sanctions against Russia and called the attempts of the West to withdraw Ukraine from the influence of the Russian Federation, quote: "naive".

By the way, Zinn is far from being the only foreign, in particular German, economist and politician who sees no benefit for the West from imposing sanctions on Russia, considering that the Russian Federation has all the leverage to deliver a “counter-strike”. The opinion of the head of the German energy ministry is in many ways similar. Losing the main supplier of energy for the most powerful German economy - like death today. That is why the head of German diplomacy, Frank-Walter Steinmeier, also takes an extremely restrained position on the imposition of sanctions against Russia.
We should not forget that Germany today is the main, if I may say so, breadwinner of the European Union. And hardly in the same Brussels this status of Germany is not taken into account. It should not be forgotten that Germany (and personally Angela Merkel) has personal accounts with the States today - after the emergence of impartial information for Merkel that the NSA was spying on her with the active support of this process by the American authorities.

In this regard, the picture looks very interesting. On the one hand, the “generals” of the EU need to prove their loyalty to Washington, and therefore impose sanctions on Russia. On the other hand, it is impossible not to take into account the opinions of German experts, on which no less than the financial stability of the European Union itself may depend. It seems that today they don’t think about it, except that the “Young Europeans” (marginal “democrats” of the EU), who need to by all means prove their delight with the policy of the United States of America. These are Lithuania, Poland and all the rest from the list of “democratic” ...

They are not going (at least for now) to impose economic sanctions against Russia and from the diametrically opposite side. China announced this from the very beginning, and now Japan claims the same. The Foreign Minister of the Country of the Rising Sun, Fumio Kisida, in an interview with the NHK television company, said that Japan would not impose sanctions against Russia, but would closely monitor the situation in Ukraine and the reaction of other countries to it. A few days before Kisida’s speech, Japan’s Prime Minister Shinzo Abe gave an interview to the same TV company, who said that he and the US President had a telephone conversation, in which he (Abe) called on all parties to take discreet decisions under international law . - About the sanctions silent ...
Of course, the Japanese authorities are well aware that if they make at least one “ik” about the imposition of sanctions against Russia, it is hardly ever in the foreseeable future that they should even expect at least some kind of negotiation process on the South Kuriles. But, most likely, it is precisely this question that today is decisive for Japan (unless, of course, the significant Japanese investments in Russia and projects for the delivery of energy resources from the Russian Federation to the Land of the Rising Sun to the Industry of the Rising Sun are out of the question). As they say, do not go to the grandmother - the Japanese elite precisely discussed in their own margins the questions of a reserved position in relation to Russia, bearing in mind that if you don’t particularly bother with the Russian Crimea today, then you can “ask” Moscow to “constructively” resolve the issue on the South Kuriles tomorrow. Do we really need such support (not even support — and the mere absence of splashes of saliva) at the moment — a daunting question. Solve it with one stroke of the pen - certainly not work.

PS The IMF has a serious debate about reducing US influence. Today, the United States International Monetary Fund, in fact, is soloed, having a “veto” also veto power. It turns out that any (even the most seemingly ordinary initiative) should be discussed without fail with Washington, and not just discussed, but achieved approval by the White House. In such a situation, the IMF not only loses its “international” status, but finally turns into another pressure tool from the United States — a sort of branch for carrots and sticks. The Russian side has announced that it is raising the question of depriving the United States of its veto power in the IMF, as the United States has been blocking a reform model for about 4 years, in which the number of opportunities in the IMF may increase for major global players. Let a small, but still another blow to US hegemony ...

Ctrl Enter
Noticed oshЫbku Highlight text and press. Ctrl + Enter
We are
Russia, Turkey and the "Crimean Question"Situational analysis of the death of the MH17 flight (Malaysian Boeing 777), made on the basis of engineering analysis from 15.08.2014
Military Reviewin Yandex News
Military Reviewin Google News
124 comments
Information
Dear reader, to leave comments on the publication, you must sign in.