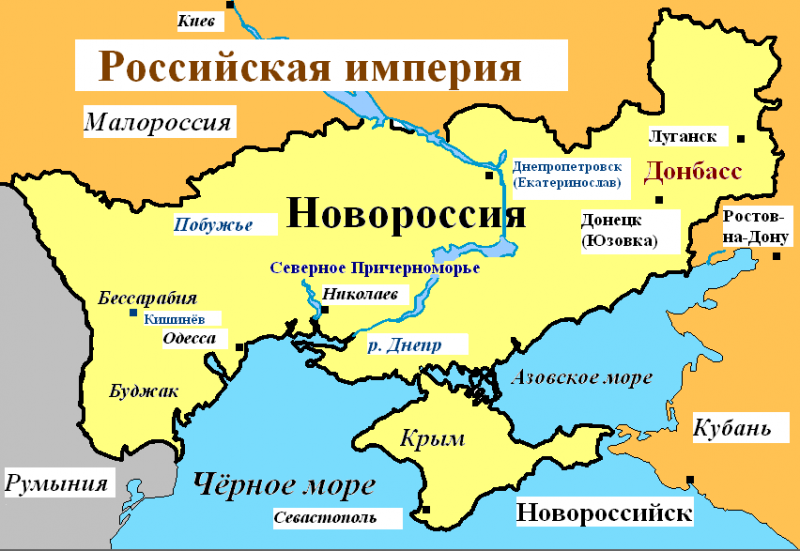 The statement that the only definition of Ukraine is negative - “Ukraine is not Russia” - has long become a commonplace. But after all, that was the original task set by the Austrian project pioneers - to reformat the pro-Russian Rusyns of Galicia consistently into “Nerossiyu”. To the credit of the designers, however, it should be noted that the Austrians needed only “Non-Russia” - the task of “Moskal on knives” was not set at that time, the transformation of “Non-Russia” into “Anti-Russia” is the merit of the next Polish and German owners. At the same time, of course, the Austrians did not feel any need for a positive self-determination of the constructed “Nerossia” - it only had to become one of the minor building structures for the planned reformatting of the twin Austro-Hungary into the triune Austro-Hungarian-Slavia. But even to transform the pro-Russian Galicia into a relatively peaceful "Non-Russia", incredible efforts had to be made. In particular, it is almost universal to destroy the Ruthenian intelligentsia and replace it with a dozen semi-educated renegades — the first generation of Ukrainizers.

However, the following owners simply turned “Nerossiyu” into “Anti-Russia”.

In general, the fate of Galicia is a tragedy that has no historical analogs. Something similar is described only in fantasy waste paper - elves who fell into the hands of the Black Lord and after many years of torment turned into orcs by him.

Today's Galicia is formed by interwar Poland and Nazi Germany. And this is exactly "Anti-Russia". UNA-UNSO units participated in all wars and local conflicts of the 90-s: Karabakh, Transnistria, Abkhazia, Yugoslavia, Chechnya ... There were no state interests of Ukraine in any of these conflicts. As the “Ukrainians” did not have any historical ties either with the Azerbaijanis, or with the Georgians, or with the Chechens, or with the Croats, or with the Muslims of Bosnia and Herzogovina. The Galicians had only one motive to participate in all of the above wars - Russian volunteers fought on the opposite side. The desire to fight against the Russians anywhere in the world is the only task stitched in the program of today's Galician. Yes, knowledge of history allows us to understand that it is not so much their fault as their misfortune. But rabies is also not the fault, but the misfortune of infected animals. This does not negate the need to protect oneself from danger.

Galicians in today's izvod - suicide bombers. The only task realized by them is impossible due to the incommensurability of forces. But they do not even try to abandon it and try to work out a positive program of independent creative existence without a constant search for the possibility of a new conflict with Russia. They do not want or are fundamentally incapable - while it is difficult to say ... Here we are not talking about good and evil. It is only about life and death. People who do not have positive values, who cannot formulate the meaning of their existence and the existence of their state without mentioning the name of the “enemy” - do not just want to kill. They themselves do not want to live. They have no program for life. They serve death in the truest sense of the word.

Therefore, one should not be surprised at the speech of Dmitry Korchinsky and the idea of ​​the “Ukrainian Taliban.” Nothing new. Just Galicia.

However, the last 23 of the year Galicians exist within the stillborn “Ukrainian state”, enjoying the rights of a privileged minority. It is necessary to understand a very important detail of the processes occurring in Ukraine. Ethnically, today's Ukraine is not twofold, but tripartite. The first part - Galicians and Volhynians (both sides are ignored for the time being). The second is the Little Russians of the center and northwest. And the third - Russian New Russia.

Twenty-year linguistic and educational terror against Novorossia is not just a whim of Russophobic "Ukrainians." This is the only effective mechanism of Ukrainian ethnogenesis. Only having united against the “citizens of the third grade” - the Russians of New Russia, the Galicians and Volhynians, together with the Little Russians, are fused into “Ukrainians”. If tomorrow “Ukraine” loses Novorossia, the spring of ethnogenesis will burst. Without the "third-rate" Russian Galicians will have nothing left, as with all the ardor to take up the complete Ukrainization of the "second-rate" Little Russians.

It will not last long - sooner or later (rather, very early) it will generate not only Makhnovshchina throughout the center and north-west, but tearful requests of Little Russians back to Russia. Yes, and the differences between Galicia and Volyn also emerge to the surface ...

There is nothing new in this. The process is quite traditional. Suffice it to recall that the culminating - but still not completed - Georgian ethnogenesis stopped after the loss of Abkhazia. Only in the process of the colonization of Abkhazia, the Mengrels and Svans - the last tribes not fully integrated into a single ethnic group - became “just Georgians”. Now the process is interrupted, and it is difficult to say whether it will continue in the foreseeable future.
"Ukrainizers" all understand this perfectly. It is precisely this - and by no means “insane, unthinking Russophobia” that explains the terror against Novorossia. And it is precisely this that explains the categorical unwillingness to let go of Novorossia — despite all the seeming costs of staying under one state roof of such heterogeneous parts. And to stand against the attempts of federalization they are forced by the same considerations. Federalization with clearly defined guarantees for Novorossia stops anti-Russian terror — and thus, despite the preserved “territorial integrity,” stops ethnogenesis and starts the mechanism of turning the territory of historical Ukraine into boundless Guliai Pole.

However, all these considerations lead to very disturbing conclusions. The chance that fell today is most likely the last chance for Novorossia. If today the Russian authorities do not end the situation, Novorossia, as an ethnic entity, will disappear within one and a half to two decades.

Today there are many calls and appeals of Russian-speaking residents of Ukraine (mostly Kievans) in the network - “nobody depresses me, nobody forbids me to speak Russian, I don’t need to save me from anyone, leave my Ukraine alone!” The writer’s appeal caused the greatest response Andrei Valentinov (Shmalko). At the same time, none of the authors thought it necessary to say a word about dozens of killed by thugs from the Maidan. This circumstance alone completely devalues ​​them. But it's not that.

In the remarkable novel “The Knife”, Serbian writer Vuk Draskovic describes in detail the process of ethnic rebirth. The process of turning a Serb into a Bosnian "Muslim". The boy was taken to the Janissaries at a fairly conscious age - years in 10. After forty years, an elderly Muslim returns to his homeland, having made a good military career. He builds a rich farm near his native village, builds a mosque - but also builds a rich Orthodox church in his native Serb village. Generations pass. The farm grows into a Muslim village. Serbs and Muslims - more and more distant relatives - remember, however, about their relationship, they visit each other, celebrate holidays together ... But the sixth generation of relatives, when the opportunity arises - the German occupation - takes knives and goes to cut the Serb village . And the shocked Serbs hear before their death from their six-, seven-family brothers: “We have always hated you!” But Draskovic describes the traditional process. Leisurely. Almost "natural." We are dealing with a high-tech process of high-speed growing broiler.

Russian readers who followed the work of Ukrainian science fiction writers: Marina and Sergey Dyachenko (now becoming “Dyachenkas”), Andrey Valentinov, Olga Chigirinskaya — if they so wished, could notice how their worldview changed over the course of one and a half decades. Dyachenk during this time managed to go all the way, all six generations. Valentinov’s appeal was written by a representative of the third or fourth generation. Cut it is not ready yet. But this is just a matter of time ...

But the militants of the Right Sector, who are beginning to speak in camera in broken Ukrainian, but quickly get lost in their native Russian — these are also people who have run all their way through six generations in fifteen or twenty years. True, unlike "Dyachenok", consistent and not wagging his backside. Already took a knife in hand. "Onizhedeti". Yesterday's Russian children. Today's Janissaries.

This is again not so much their fault as their misfortune. The first appeal, flashed on the network a week ago (I did not remember the author, unfortunately), began with the phrase: “Until now, I was embarrassed that I live in Ukraine, but I don’t speak Ukrainian ...” The process of rebirth is running. A person is embarrassed that he speaks his native language, which is spoken by at least half of his fellow citizens.

Is the Romansh-speaking Swiss awkward, not knowing either German or French? Permanent, not for a day, continuous pressure can be sustained only in one case - if you are mobilized in advance. If you know that the enemy is pushing you. Russian New Russia and historical Ukraine were not mobilized. They saw in people who carried out linguistic (then still linguistic) terror not enemies, but citizens, who need to be understood, agree with something, argue with something, seek a compromise ... And to seek a compromise with an uncompromising enemy means to doom yourself to kill. And this defeat begins, this rebirth from the fact that you are “embarrassed”, that you speak your native language. And those yesterday’s Russian children from the Right Sector are children who passed the most uncritical age at the merciless pressure of Irina Fanarion: “If Olena becomes Alena, then she should pack her bags and leave for Muscovy. Masha is not our form. Let him go where Masha lives. We have to be Marichka. Petya must also leave here if he does not become Petrik. Mykolku never call Kolya, Gannusya Annushka, and Natalochka Natasha. ”

These - it would seem the most radical - can still be saved. "Onizhedeti" - in many ways really children. They went for simplicity, clarity and power. To understand that this simplicity is the simplicity of death, they are not yet able. But to show that the power that attracted them is only apparent strength, dissipating in the dawn rays, as evil spirits should be - and the wraith will subside ... And then - work for psychologists and deprogrammers. As with people saved from a totalitarian sect.

If today Novorossia is handed over, everything will end very soon. The Nazis who came to power will no longer confine themselves to language terror. The real terror will begin - judging by today's reports from Donetsk, it has already begun. The most active, strong, able to organize resistance will be physically destroyed. The rest - digest.

Another 15-20 years - and ethnogenesis will end. On the eastern border of Russia there will be a single fifty-million state governed by a Papuan-simple, murderous and suicidal ideology: "Moskal - on knives!"

Few will not seem to anyone. Neither us, nor them, nor Europe, nor the States.

Ctrl Enter
Noticed oshЫbku Highlight text and press. Ctrl + Enter
We are
Kharkiv political prisoner turned to Makarevich: say thanks to those who shouted "Moskal knives!"What you didn't want to know about England
Military Reviewin Yandex News
Military Reviewin Google News
112 comments
Information
Dear reader, to leave comments on the publication, you must sign in.