"Crimea is associated with Russia." The historian believes that the peninsula has a historical right to independence. 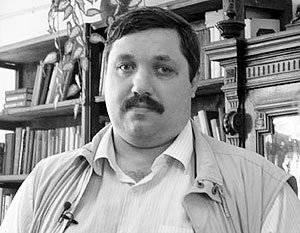 “Ukraine is a“ sick person. ” At one time, Turkey was called the “sick man of Europe”. As a result, the Ottoman state collapsed as a result, ”historian Dmitry Volodikhin told the newspaper VIEW. In his opinion, the right of the newly formed “revolutionary” Ukrainian state to the Crimea is not so obvious.


The referendum on the status and powers of the Crimean autonomy will be held at the appointed time - March 30, assured on Tuesday Chairman of the Supreme Council of Crimea Vladimir Konstantinov. Earlier, Prime Minister of Crimea Sergey Aksyonov suggested that the plebiscite would pass even earlier. So far, the question on the referendum is formulated as follows: "The Autonomous Republic of Crimea has state independence and is part of Ukraine on the basis of treaties and agreements (yes or no)."

On the eve of the head of the self-proclaimed government of Ukraine, Arseniy Yatsenyuk, following a meeting with the head of the British Foreign Ministry, William Hague, said: Crimea will remain part of Ukraine. "Nobody will give anyone the Crimea," Yatsenyuk promised.
But it should be noted that throughout its many thousands of years stories Crimea often had state independence (in various forms and under different names). The peninsula was inhabited and ruled by various nations - from Scythians, Greeks, and ready to the Genoese and Tatars of the Golden Horde. From the XV century in the Crimea and the Northern Black Sea region ruled the Crimean Khanate - a vassal of the Ottoman Empire. According to the results of the Russian-Turkish war 1768 – 1774, the Kuchuk-Kaynardzhsky world was signed with the Ottomans, according to which Crimea was recognized as independent from any outside authority, although unofficially it came under the tutelage of Russia. And 8 April 1783, Catherine II issued a manifesto on the annexation of the Crimea to Russia.

Within the borders of Ukraine, the peninsula has only been in the 1954 year (as a gift from the Soviet leader Nikita Khrushchev of the Ukrainian SSR), and as part of an independent Ukrainian state, and even less since 1991.

The current status of the peninsula will determine the Crimeans themselves. As a TV source in the autonomy government told NTV on the eve, the Crimean electoral commission will use the experience of preparing for similar referendums in Scotland and Catalonia.

“In general, I believe that only citizens living in a particular territory, in conditions of freedom of expression, can and should determine their future in safety,” President Vladimir Putin stressed on Tuesday. The head of state stressed that Russia is not considering the issue of joining the Crimea. As for Ukraine, as Putin noted, “it’s hard not to agree with experts who believe that a new state is emerging on this territory, and we have not signed any documents with this state”.

About the country with which the Crimea is more connected, how justified are the claims on it from the side of the new Ukrainian state, and the possibility of self-determination of the Crimeans in an interview with the VIEW Vzglyad told the historian and writer, doctor of historical sciences, associate professor of the Faculty of History of Moscow State University Dmitry Volodikhin.

VIEW: Dmitry Mikhailovich, is it possible to say that the Crimea and the present-day Southern Ukraine (what was called Novorossia) has historically been much more closely connected with Russia - since the 18th century, and not with Ukraine-Little Russia itself?

Dmitry Volodikhin: It can be said without any reservations that Crimea is much more historically and culturally connected with Russia than with Ukraine. The obvious question, and there is nothing to doubt, in my opinion.

Ukraine for all its previous history had two periods of its own statehood. The first period is the so-called hetman (17th century - early 18th century). Hetmanate - the territory controlled by the hetmans of the Zaporozhian Army, arose after the rebellion of Bogdan Khmelnytsky (which began in the 1648 year). In 1654, after the Pereiaslav Council, the protectorate of the Russian Tsar Alexei Mikhailovich was adopted. In 1764, under Catherine II, the rank of hetman of the Zaporozhian Army was canceled. Subsequently, the entire territory of present-day Ukraine, except Galicia and Bukovina, was incorporated into the Russian Empire. And, I emphasize, the Crimea has never been a member of the hetman.

The second, brief period of the historical existence of Ukrainian statehood dates back to the times of the Civil War of 1918 – 1920. But none of the state formations that the current Ukraine can claim for continuity (neither the Ukrainian People’s Republic at the time of the Central Rada and the Directory, nor the Ukrainian power of Hetman Pavel Skoropadsky) even formally included Crimea.

When, after the Civil War, approximately the current borders formed the territory that constituted the Ukrainian Soviet Socialist Republic, the peninsula also did not become part of it. Crimea (which was an autonomous republic in 1920 – 1946, and then was transformed into a region) was subordinate to the RSFSR. As you know, the peninsula became part of the Ukrainian SSR in an artificial way - thanks to the voluntaristic decision of Nikita Sergeyevich Khrushchev, who in February 1954 transferred Crimea to Soviet Ukraine.

There is nothing to add to this. The connection of Ukraine and the Crimea is a phenomenon of modern history, one might even say, ultra-longest.

VIEW: In 1990-e years, the question was repeatedly raised that Sevastopol was not legally transferred to Ukraine and could have returned to Russia. Is it so?

But the city was given away by one stroke of the pen in the 1990's. The so-called “Big Treaty” was signed - the Treaty of Friendship and Cooperation of 1997, which secured the post-Soviet borders between Russia and Ukraine. The return of Sevastopol is not particularly advertised. Apparently, in that state chaos, in which the former territory of the USSR was, it was difficult to allocate time for “fussing” with a small land of Sevastopol. Only a very high-quality political elite would be capable of such a fuss. But the political elite 1990-x does not hold water. She apparently simply did not know what to do with Sevastopol, and therefore easily and thoughtlessly gave it to him.

VIEW: Is it possible now, in the conditions of the actual collapse of the Ukrainian statehood, to change the status of the Crimea and other territories - say, according to the results of referendums? We all know about Kosovo. What are the historical precedents of the internationally recognized exit from one state territory in Europe?

D.V.: It is quite possible. And what's more, that would be fair. We see that Ukraine is a “sick person”. So - “a sick man of Europe” - several centuries ago they called Turkey. As a result, the Ottoman state collapsed as it was known, because it could not cope with national and religious problems on its territory, and new states were formed.

Ukraine also can not cope with national and religious issues on its territory. This state is hard hurt. Because of this, a benefit for its population, in my opinion, would be the withdrawal of some territories from the authority of the modern Ukrainian government.
From my point of view, it would be possible to return Sevastopol to Russia and provide Crimea and a number of territories north of the Crimea: Kherson, Nikolaev, Odessa - independence. As for the eastern territories of Ukraine: Lugansk, Donetsk, Kharkov, these regions could be granted broad autonomy rights, and Ukraine itself could be given the status of a federative state. This, in my opinion, would be the most reasonable way out of this situation.

VIEW: Ukrainian nationalists draw a parallel between the current situation in the Crimea and the Anschluss of Austria, Germany. How would you comment on such statements?

D.V.: In the statements of the Russian government, the idea that the Crimea should be attached (Anschluss is the accession) to the Russian Federation was not voiced anywhere.

Now, in my opinion, we are talking about two ways out of the crisis: Crimea will either receive extremely broad autonomy, or acquire the status of an independent state. I believe that both ways would be worthy, but since the ability of the Ukrainian political elite of our time to cope with national and religious issues and even just bring order to their economy is not visible, for Crimea it will be quieter independent existence, that is, the status of a sovereign state.