Alexey Chaly: “If a spark hits someone’s chest, which subsequently will not allow either to betray or deceive, then we will have a future ...” 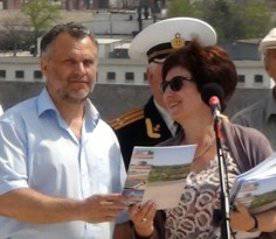 After the revolutionary events of February 23 in Sevastopol, which raised the whole of Ukraine to the fight against fascism, very little time passed. The local thoroughly corrupt "political elite" is frightened and desperately afraid of change.


And they know what to fear. For the first time in Ukraine, it was not a politician who came to power in a separate region, but a man with principles and convictions. For them, this is a pretty scary phenomenon. It is impossible to agree with him, it is difficult to “integrate” it into the system of kickbacks that has developed over the years.

Hence the spread of rumors, frank aggression against the new head of the city.

Personally, I have known Aleksey Chaly for a long time, therefore I am confident in his sequence. I simply advise you not to give in to panic ("we are drained"). Yes, this man speaks and promises little. But if it promises, it definitely does.

Strange and incomprehensible quality for current politicians. That is why his actions sometimes seem strange. He does not jump in the stands and rallies, does not give promises, does not appease correspondents, refusing to interview such influential TV channels, whose attention would be the height of happiness for any of his predecessors. He tells everyone: "Once. I do Sevastopol. ”

Chaly just focused on the task. He feels a personal responsibility to each of those who believed him on 23 February. The Sevastopol revolution is proceeding calmly, without any particular upheavals for the life of the city. I am sure that in the near future we will have very serious and pleasant statements. For various reasons, much can not yet be spoken out loud.

Chalyu just need to believe. The main task today is to ensure the holding of a referendum and to enable the residents of the city to decide on their future.

For journalists who are experiencing an informational vacuum, I propose that Alexey Chaly, a speech he made 5 on May 2012, at the opening ceremony of the Memorial Complex 35 Coastal Battery. http://xnumxbatery.ru/

The speech well characterizes the convictions of the national mayor of Sevastopol. Moreover, he does not change his views depending on the political situation.

“My presentation will consist of three parts. First part - historical. This idea arose in 2005. Probably, the very next day after Tavrida-Electric completed the restoration of the British and Russian monuments on the Suzdal heights. It took about a year and a half to realize the official and administrative possibility of creating the complex. Unfortunately, at that time nothing said that this could be done. You yourself see, the place is good, the sea is nearby. Part of the territory by that time was already captured by quick neighbors. The other part, as it turned out later, was also given for development. The battery itself was in a deplorable state after the 90s. There were no metal parts. Even managed to cut off armor with KDP. Well, in addition, the President came to power in the country, a great lover of the foreign word Obersturmbanfuhrer. Local officials also began to get a little scared. And when it came to creating a memorial to the memory of Soviet soldiers, we were sent to this very President. And sometimes even further ...

Fortunately, not all officials were such. Thanks to the efforts of other people, it was possible to begin work in this direction. Here I must say words of gratitude to the then City Council, which made a definite decision. And also Valery Saratov and Vadim Kolesnichenko. These were the key figures that made it possible to start this project. At that the historical part ends. You can watch the rest in the movie ...

The second part is called “WHAT?”. When the project ends, you unwittingly begin to compare what happened with what was laid. If we talk about the formal compliance of the result with the project that was submitted to the public hearing, then everything worked out. Different points of view were expressed and expressed about what came of all this. Someone is talking about coarse architecture, cumbersome and irrelevant. Someone talks about the loss of the spirit that was present here. Although I must say that the "spirit" really was. Because the battery was literally filthy. Someone absolutely fantasizes on the themes of the soldiers' bones lying under the concrete paths. Although, as I recall, there are no concrete tracks on the complex.

I will not give personal assessments here. Since he was involved in the project from the very beginning to the very end. Maybe I have a wary look. It is unlikely that I will make a good appraiser. But for me, the best rating is a guest book. She convinces that the main objective of the project is achieved. It turned out that we wanted. Although this book can be found and obscene statements. But they refer to the inability to get on the battery. That, albeit peculiar, but also a way of assessing what has been done.

And finally, the third part, which is called "WHY?". I think that our generation is in great debt to two generations. The first duty, of course, is to the generation of those boys and girls who stayed here in July 1942. Unfortunately, they were just like that. Many of them suited me as children today. Although the Soviet Union had a rather good attitude towards the Great Patriotic War, nevertheless, this attitude was retouched. Well talked about victories. If we talked about defeats, then with superior enemy forces. But this episode of history, due to the fact that a lot of things are mixed here: betrayal and inability, which largely led to the tragedy. This episode was decided to be cut out of history so that the descendants would not be irritated and would not burden themselves with too complex thoughts. But at the same time they threw out the memory of tens of thousands of people. Which, at least, did not receive well-deserved recognition in life. In fact, it’s a shame to open the memorial, 70 years after the events that took place here. When only a few people who participated in those events can be present here. Therefore, this is at least small, but an attempt to repay this debt. I don’t think so ...

The second, perhaps even greater debt and sin before the future generation. If you look at the history of the Russian state, not in terms of a modern political map of the world, but in terms of Karamzin ... Or, in the words of the Patriarch, “civilized space” ... That which gave the world the greatest examples of humanitarian, technical achievements, which halted global aggression. Then our generation in this historical chain will probably be the weakest link. Or one of the weakest.
There will not be any special achievements for us, we didn’t win the war, we didn’t send a man into space ... But then they succeeded pretty well in destruction.

Educate us late. We have already done what we could. On the other hand, one does not want to believe that it is irreversible. Therefore, the only hope for our children. And who can they learn from? So, you need to organize a meeting with the generation for which there are real achievements. Therefore, we have made the Pantheon in the form of a meeting of generations. In fact, meeting young people. Because most of the people whose photos you see there are young. Meet the 1942 young people of the year with the 2012 young people of the year. People in terrible circumstances that demonstrated the rise of the human spirit. With people who live quite impressively and well fed.

It seems to me, if as a result of this "meeting", someone will get a spark in their chests, which subsequently will not allow them to betray or deceive, then we will have a future. And maybe someday we will walk the old and weak along the streets of our native city and will be proud of them again. As in childhood. And now it's hard to do.

Looking at the writings of children who visited the Pantheon, you understand that, apparently, this goal has been achieved. Therefore, I want to congratulate everyone. It seems to me that we have done a great and good thing. Thank!"

Ctrl Enter
Noticed oshЫbku Highlight text and press. Ctrl + Enter
We are
Word and deed. Mikhail Chaly: "We ran along the burning bridge"Alexey Chaly remembered the defense of Sevastopol from the “Kiev junta”
Military Reviewin Yandex News
Military Reviewin Google News
31 comment
Information
Dear reader, to leave comments on the publication, you must sign in.