Four mistakes and the collapse of the interim "government"

March 5 2014
102
The self-proclaimed Kiev Provisional Government long before its triumphal tactical “victory” condemned itself to a strategic defeat, having made a series of stupid mistakes. From the very beginning of their attempts to lead the protest movement, they became hostages of circumstances and were not able to form a favorable situation for themselves, each time they made a decision tightening the noose around their neck tighter. 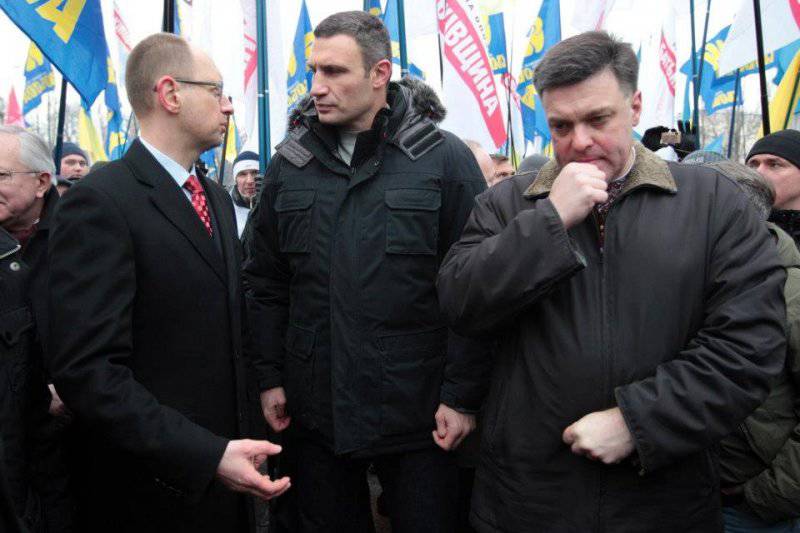 The first trap into which the three-headed opposition fell is the Russophobic rhetoric of euromaidan. At first, scornful chants “Hto not jumping, that moskal” began to be heard and chauvinistic verses sounded, then the influence of right-wing forces on the state of affairs on Maidan began to be felt more and more, which clearly pushed the majority of the population of South-East Ukraine. Even in the first days, when the protests were just beginning, we wrote, “What are you doing? You’ll push away half the country so much!” But nobody listened to us. Instead of distancing from the far-right rhetoric, Maidan went with her about.

Later, the influence of the nationalist Right Sector increased, became very intrusive, and then completely began to develop into unmotivated violence. This became unacceptable for the population of the Southeast, who, for their spontaneous resistance to such Maidan, was also massively baptized into “titushki” (telling in parallel tales of their “paid up”).

What do we have as a result? A significant part of the country's population not only did not support the Maidan, but gradually began to hinder and resist it, at first passively (in the form of formal discontent), and as pressure from the Maidan increased, more and more actively. For the opposition, which could not boast of popular love anyway, it turned out to be very sensitive and is now “auks” with active resistance in the eastern regions and complete rejection in the Crimea.

Could opposition leaders avoid this trap? Most likely no.

Firstly, VO Svoboda and its leader Oleg Tyagnibok are the bad karma of the coalition that claims to be the spokesman for the will of the whole people of Ukraine. The image of Tygnibok built on the foundation of xenophobia, his electorate - the carriers of nationalist views, he is not able to abandon the Russophobic rhetoric and at the same time retain their voters.

Secondly, Euromaidan itself arose on the basis of a hostile attitude of a part of Ukrainians to strengthening economic relations with Russia, and therefore, had all the prerequisites for strengthening Russophobic attitudes. The opposition, in turn, initially had too low a level of support among the protesters, so it was not able to somehow influence the formation of goals, the ideology of the movement (and did not try). Opposition leaders could not lead the crowd. The crowd dragged them wherever inertia dragged them.

The second trap into which the “temporary worker” has fallen is the repeal of the law on regional languages. Most likely, the same inertia of the crowd pushed them towards this trap. By repealing this law, it was planned to “buy” the love of the protesters on Independence, where nationalist views were common. The stake was that they were more active physically and politically, and, therefore, more necessary than residents of the South-East, whose opinion was consistently ignored by the opposition (it was clear from the beginning that they would be outraged by this decision). But the opposition brutally miscalculated. Tired of violence in three months, the country perplexedly reacted to such an untimely and incomprehensible step, because of which the confrontation could flare up with a new force. Residents of Lviv even initiated a rally in support of the Russian-speaking Southeast, declaring that the day will speak only Russian.

People all over Ukraine wanted no grounds for quarrels, they wanted to improve the situation in the economy, stabilize the situation in cities, end violence and cases of looting. And without that, many supporters of the Maidan turned away from him, seeing the terrible consequences and many faces of the “new government”. And then another attempt to embroil people.

But that's not all. The repeal of the law on regional languages ​​has to a certain extent untied the hands of Russia. From now on, she had the opportunity to put pressure on "temporary workers" in the legal field, to accuse them of violating the rights of Russian-speaking citizens. And this action outraged not only Russia - even Greece, which has its numerous diaspora in Ukraine, condemned such a step.

Could this error have been avoided? Easy. It is done solely by stupidity.

The third trap for "temporary workers" is a sharp change in foreign policy. Opposition statements about the resumption of European integration processes, the adoption of relevant laws could not please Moscow, in fact, as well as the strengthening of Russophobic sentiment. The economy of Ukraine is very closely connected with the Russian, it depends on it in a number of areas. And then there was a loan from Moscow added, an agreement on a discount on gas, as well as a number of contracts for the most high-tech sectors of the Ukrainian economy - aircraft manufacturing, shipbuilding, and the space industry.

The country’s money is simply not there, they are not there at all; it was urgent to resolve this issue even when Yanukovych went to negotiate with Putin, and now this is simply the most acute problem. Of course, it was silly to quarrel with the eastern neighbor to the newly minted government with such highly questionable legitimacy. So immediately, without reinsuring, not having agreements on alternative sources of credit.

The opposition could have avoided this mistake, but it was carried by the same inertia. Euromaidan initially demanded the signing of the Association Agreement with the EU (although now the foreign ministers of several EU member states have already recognized that the agreement was extremely unfavorable for Ukraine and requires revision). It was possible and necessary to delay, not to make such fateful decisions without a thorough analysis of the situation, consultations and negotiations. And the rush from which they rushed to stamp the laws in the Rada with dubious legitimacy from the first days looks very frivolous. And then what has Rada changed since she punctuated the “dictatorial” laws of January 16 in the same way? The question is rhetorical.

The fourth trap into which the "temporary workers" fell is the demonization of law enforcement agencies and repression against the "siloviki". It would be understandable and reasonable if the higher ranks who made decisions were punished. But it was precisely the grassroots performers who suffered, those who simply carried out the orders of the authorities for the support of law and order were injured, they were publicly condemned, and some were given to the crowd to mock. And in addition, they disbanded the "Berkut". Such a state of affairs could not fail to “temper” temporary workers. Therefore, now the security forces prefer to “slaughter” on the orders of the new government, since this does not threaten them, in contrast to the execution of dubious orders, it is not clear from whom. It became clear to the "siloviki" that submission could be punished more severely than insubordination. Yes, and the newly appointed heads of security agencies do not enjoy respect. Thus, the government, which does not have sufficient support from the people, not only failed to gain the support of the security forces, but also restored them against itself.

The opposition trio could have avoided this mistake. Yes, the crowd wanted revenge, but even here it was possible to maneuver. To start investigating, not to let ordinary performers be torn apart, to emphasize the facts in the information field that the security forces also suffered in clashes, etc.

Good in stories There are lots of such examples. For example, the Chinese present the conflict of Mao Zedong and Chiang Kai-shek as a conflict of two patriots who simply had a different vision of the future of China. But for this, inner nobility and real patriotism are needed, with which the Provisional Government is clearly tough.

Summing up. The new government does not have a legal justification for its legitimacy, there is no support for external players (the US and the EU have actually disowned them, the IMF asked "not to demand money so publicly", and everything is clear with Russia), there is no "gold reserve" and no "bayonets ". Moreover, the majority of the members of the new government are not distinguished by their particular professionalism in their areas of responsibility, not to mention the complete ideological and project vacuum of the “temporary workers”. All this suggests that they will not sit on the throne for long.