March 4 2014
116
Western leaders have found something to their liking: to practice how to behave with countries that have, let's say, their own, different from the western and pro-Western, point of view. In particular, on the situation in Ukraine. For obvious reasons, the main focus on finding a “hard answer” is placed on the Russian Federation. We will try to deal in more detail with the measures that our “partners” are going to take in our (Russian) attitude.


To begin with, I would like to point out a state that is “concerned” in such a way that it “cannot eat” - if to paraphrase a hero of a remarkable Soviet film a little. This, as the absolute majority of readers guessed, is, of course, the most democratic, the most humane, the brightest and smelling exclusively of violets, the state of the world - the United States of America ...

The other day, US Secretary of State Mr. Kerry made a sizzling critic of the Russian position on the situation in Ukraine. Kerry noted that the United States and "some other countries" (we guess which ones) are determined to isolate Russia in the international arena due to the possibility for the Russian President, the Federation Council, to use Russian troops on Ukrainian territory. 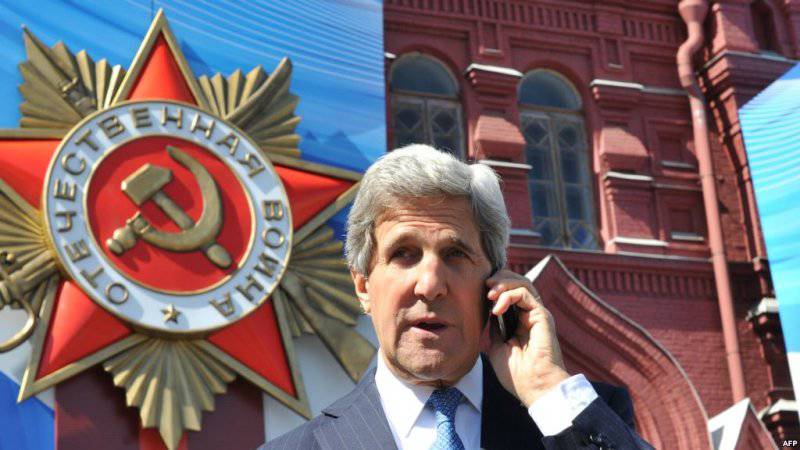 All the foreign ministers with whom I spoke yesterday, including representatives of the G8 countries, have a common view on the situation: they are going to isolate Russia and not deal with it as usual
, - expressed the chief diplomat of the United States.

After such a statement, Mr. Kerry would like to ask him when, for the last time, he even glimpsed his progressive democratic view of the globe? Which country is Kerry and other "representatives" going to isolate "internationally"? Russia? With Burundi or Ivory Coast is not an hour confused (forgive the people of Burundi and Cote d'Ivoire). Russia is like not only within the Garden Ring ...

In this regard, for the US Secretary of State and other “insulators” I would like to provide a small geographical reference: the total length of the border of the Russian Federation (according to the Frontier Service) is 60900 km. With China alone, more than 4200 km ... “Isolator” did not grow.

However, the United States is determined ... The same John Kerry threatens:

Russia may lose the G8 summit in Sochi. If the situation does not change, it is possible that this country will even be excluded from G8.
Immediately after the statement by Mr. Kerry, information came from other representatives of G8 that they, they say, all of them suspend their preparations for the G8 summit in Sochi, which is scheduled for the summer. So, on a visit to Putin, having expressed his principled “fi”, representatives of such states as the USA, Germany, Canada, France, Great Britain, Italy will not deign to go (and this state is still doing something in the G8 - maybe or pens paint ...) and Japan.

So, so, so ... The Russians are offended by this demarche ... Well, we will not be able to contemplate in Sochi such democratic lights as Barack Obama or Canadian Prime Minister Harper (and there is such ...). What a tragedy, however ...

True, by agreeing not to prepare for the summit, representatives of far from all the G8 countries expressed their determination to exclude Russia from G8. One of those countries that declared the need to maintain a direct dialogue with Russia was Germany. Whether it was after Putin and Merkel talked on the phone, or if the high-ranking German politicians still have more gray matter in the skull boxes and, accordingly, more pragmatics than some (will not show a finger ...) others. In general, the Minister of Foreign Affairs of Germany Frank-Walter Steinmeier spoke out about the Kerry proposal impartially. He stated that he saw no reason to exclude the Russian Federation from G8, presenting his arguments:

I rather belong to those who say that G8 is the only format in which we, the representatives of the West, can still speak with Russia without intermediaries. And should we really sacrifice this format?

Probably, Steinmeier took such a position, which does not fit Washington, for the reason that he, as the Russian proverb says, has a stigma in a cannon. After all, it was Steinmeier who was one of the “guarantors” of the February 25 agreement from 2014 between Viktor Yanukovych and representatives of the so-called Ukrainian opposition. As everyone knows, the guarantors of Steinmeier and his two colleagues (representatives of France and Poland) did not come out. And if it did not, then the German Foreign Minister, in fact, is one of those who actually condoned the escalation of the conflict in Ukraine. Well, if Harr Steinmeier realizes this, then we can consider it a step forward from his side. But will the position of the head of the German Foreign Ministry be heard in the rest of the Six? ..

Although on the other hand - and what is, in fact, G8? Have you ever resolved important issues in this organization, did you take into account, say, Russian interests? Sorry, but the phrase “The Big Eight” does not cause anything other than irony, if only because it has Italy, not China, for example, if it has Japan, but not India or Brazil ... So, that today's G8 is a peculiar concentrate of pro-American geopolitics, which, by a misunderstanding, is diluted by Russia. But if the guys there are “well concentrated” - to the level of vigorous acetic essence, then whether Russia needs to marinate with them, persistently “add as friends” to this narrow circle of impassable debtors (the national debt of Japan alone today is more than 12 trillion (!) dollars)? .. A question from the category of rhetorical.

But, let's continue about the measures. One of the measures that should happen to this, is again expressed by Mr. Kerry. Not otherwise, all night in his notebook, breaking pencils, made notes.

So, the next measure against Russia from Mr. Kerry personally. According to him, citizens of Russia who are going to come to the US in the near future or, attention, to Europe, may be denied visas. We remind you that this seems to be said not like the Supreme Pharaoh of All Europe and America, but the head of the Ministry of Foreign Affairs of a single state. In this regard, the question arises: do the words of John Kerry mean that decisions on issuing or not issuing visas to the European Union are made to Russian citizens in the United States of America, or under the “sensitive guidance” of the diplomatic services of this state? The world, of course, guessed that the European Union did not know what independent politics was, but so clearly ...

By the way, on the ban on entry and other demarches. The US side refused to receive visas to representatives of the Rosselkhoznadzor, who were supposed to arrive in the US to discuss work in the WTO (in particular, on the possible accession to Kazakhstan of the WTO). Considering the “bright future” that can be expected when joining the World Trade Organization, most news the delegates from the Rosselkhoznadzor were probably delighted about Kazakhstan being banned from entering America ... The Americans thought it would make Astana indignant - they say, “Russian militarism” does not allow honest Kazakhs to join the WTO humanly, but honest Kazakhs responded much more restrained ... The Kazakh delegation, by the way, was admitted to the United States. And now, her (the Kazakh delegation) representatives think - maybe in vain we were “let in”, maybe before it is too late - well, this is her WTO ...

In general, the isolation is mind-blowing, nothing to say.

By the way, in this regard, it would be important for the Russian Foreign Ministry to mention all those Russian citizens to whom the US Embassy is going to issue visas without any problems - there is reason to think. Especially, given that the average Russian in the United States is hardly going.

Other “our” partners, hot Finnish guys, for example, represented by Finnish Defense Minister Carl Haglund, decided to apply their sanctions against Russia. Mr. Haglund, O Mother of God, TAKEN and POSTPONED the trip to St. Petersburg, where he was to meet with Sergei Shoigu! Here is a demarche, so a demarche ... The main Finnish military man explained his “postponement” with the situation in Crimea. And how after that exist St. Petersburg people? The northern capital was waiting, you know, getting ready ...

New Zealand also decided to isolate Russia. The question is heard: “where is it?”

So the New Zealand government will suspend negotiations on the conclusion of an agreement on a free trade zone with Russia. In this regard, it is interesting to look at the person who in general thought up to conclude such an agreement with the NC. A closer just no one to conclude? For reference: the distance from Moscow to Wellington (the capital of New Zealand) in a straight line is more than 15 thousand kilometers. Another would be the signing of the border treaty refused, pranksters ...

Well, and the “world community” is threatening to boycott the Paralympic Games, recall its ambassadors from Russia (Lithuania and Canada have already withdrawn), freeze accounts in Western banks and other “horrors”. In this regard, the question-proposal to our authorities: maybe, after all, we will reformat the contents of the Reserve Fund, removing about 100 billion dollars from the "use" of the banking system of Europe and the USA? Wow, how will these systems be “delighted” ... Is there enough political will in Russia itself? ..

PS
The Iranian ambassador to Russia, Ihdi Sanai, expressed support for the Russian Federation regarding the moves being taken by the West and said that it is hardly necessary to fear for a country like Russia:

Chinese edition "People's Daily" (in fact, the main press organ of the Chinese Communist Party, expressing the position of official Beijing) writes that the United States was finally bogged down with arguments about its sanctions "in the Cold War worldview."

The complexity of the current system of international relations lies in changing the balance of the real strength of large countries; international rules have entered a period of regulation. Thus, the states of the world should renew mutual understanding about each other, abandon inert thinking, take advantage of opportunities in order to create a space for cooperation. The existing problems between the West and Russia can be solved only by relying on concrete cooperation and trust.

It is necessary to abandon the ideological shackles of the Cold War, the only way to reduce the force of unnecessary resistance, improving international relations.

A British company British Petroleum, according to its management, lost only 1 a billion dollars in just one day of “international sanctions” against Russia due to falling Rosneft prices ... Analyst Andrew Neff says this:

The deterioration of Russia's relations with the West puts British Petroleum and Exxon in an extremely difficult position. They are waiting for a relatively difficult period, but they are unlikely to leave the Russian market.

Who said anything about the international isolation of Russia? ..

Ctrl Enter
Noticed oshЫbku Highlight text and press. Ctrl + Enter
We are
ARMY-2016. The army will be where we will try!Results of the week. “In our cooperative, the board is always agreed”
Military Reviewin Yandex News
Military Reviewin Google News
116 comments
Information
Dear reader, to leave comments on the publication, you must sign in.