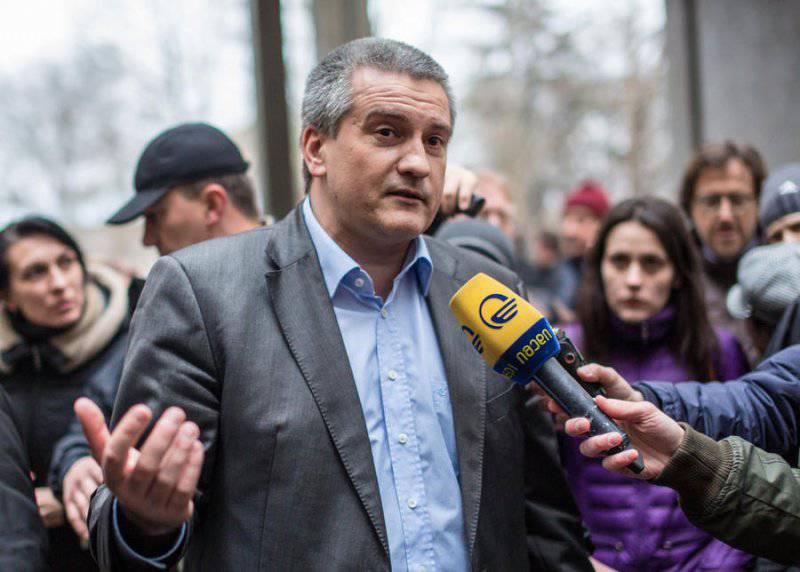 On the Perekop isthmus, which connects the peninsula of Crimea with the rest of the territory of Ukraine, are the fighters of the Crimean "Berkut". This is reported by news agencies, citing a source in the law enforcement agencies of the Crimea.

Even 27 February five buses, each of which were approximately 30 people, moved to the isthmus to prevent the introduction of the armed forces of Ukraine on the territory of Crimea. Earlier it was reported that unknown armed persons prevented the passage of vehicles to the Crimea. Later, roadblocks were removed, and only traffic police posts remained there, reports "Russia 24".

Ukrainian Prime Minister Arseniy Yatsenyuk considers the presence of the Russian military in the Crimea "inadequate" and asks Russia to order the military to move to their places of permanent deployment.

"This is nothing more than a violation of the basic requirements of the agreement on the temporary residence of the Russian Black Sea Fleet on the territory of Ukraine," Yatsenyuk said. “We demand from the government of the Russian Federation and the authorities to withdraw their troops and return them to the place of deployment,” ITAR-TASS quotes the words of the Ukrainian prime minister. At the same time, Yatsenyuk stressed that Ukraine will not succumb to provocations and will not solve the conflict by force.

The situation in the Crimea Yatsenyuk discussed with Western partners. According to the Ukrainian Prime Minister, he spoke with US Vice President Joe Biden, with European Commission President Jose Manuel Barroso, with German Chancellor Angela Merkel and with a number of EU foreign ministers. “Their position is very clear: everyone made tough statements about the preservation of the territorial integrity of Ukraine and that no one is allowed to interfere in the internal affairs of Ukraine,” Yatsenyuk said.

Aksenov: a referendum on the status of autonomy will be held in Crimea 30 March

The new head of the Crimea, Sergey Aksenov, said during a speech that a referendum on the status of autonomy would be held in Crimea on March 30, 2014, reports Russia 24.

In turn, the Ministry of Foreign Affairs of the Russian Federation published a statement saying that Russia is concerned about the latest events in the Crimea, when, on the night of March 1, unidentified armed people attempted to seize the building of the local Interior Ministry.

“On the night of March 1, unidentified armed men sent from Kiev attempted to capture the building of the Ministry of Internal Affairs of the Autonomous Republic of Crimea. There were injured as a result of perfidious provocation. Thanks to the decisive actions of the self-defense units, the attempt to seize the MVD building was prevented. circles in Kiev destabilize the situation on the peninsula, "- said in a message diplomatic.

“We urge those who give such orders from Kiev to restraint. We consider it extremely irresponsible to further exacerbate the already tense situation in the Crimea,” the ITAR-TASS document quoted as saying.

“Considering the above, understanding my responsibility for the life and safety of citizens, I appeal to Russian President Vladimir Putin with a request for assistance in ensuring peace and tranquility in the territory of the ARC,” the statement said.

In addition, Aksyonov temporarily reassigned all the power structures.

“As the chairman of the Council of Ministers of the Autonomous Republic of Crimea, realizing the powers entrusted to me by the Supreme Council of the ARC, I decide on the temporary reassignment of the formations, units, power structures of the Ministry of Internal Affairs, the armed forces, the Ministry of Emergencies, fleet, tax, border guards directly to themselves. All commanders carry out only my orders and instructions. I ask those who disagree to leave the service, ”Sergei Aksyonov said in a statement.

According to Sergey Kunitsyn, the Permanent Representative of the President of Ukraine in the ARC, Valeriy Radchenko, Head of the Crimean Main Police Department, wrote a letter of resignation.

Kremlin: Russia will not disregard the request of the Crimea to help ensure peace and tranquility

“Russia will not leave this message unattended,” ITAR-TASS quoted the administration’s response citing a source in the Kremlin.

Earlier today it became known that the Prime Minister of the Autonomous Republic of Crimea Sergey Aksyonov addressed the citizens with an emergency message. “Considering the above, understanding my responsibility for the life and safety of citizens, I appeal to President Vladimir Putin about rendering assistance in ensuring peace and tranquility in the territory of the Autonomous Republic of Crimea,” the statement reads.

In addition, Aksyonov directly reassigned all the formations, units and power structures of the Ministry of Internal Affairs, the Moscow Military District, the Armed Forces, the Ministry of Emergency Situations and the fleet.

Recall, February 26 near the building of the Verkhovna Rada of Crimea held two meetings. In one of them, there were supporters of the annexation of Crimea to Russia, in the other - representatives of the Crimean Tatar community, who advocated preserving the region within Ukraine and supporting the recent change of power in the country. Between the participants of the rally, two people were killed and about 30 were injured . After a series of skirmishes, pro-Russian activists were pushed aside. On the morning of February 27, the buildings of the Parliament and the Government of Crimea were occupied by the self-defense forces of the Russian-speaking population of the region.

Earlier, the southeastern regions of Ukraine, the Autonomous Republic of Crimea and Sevastopol announced that they were taking “responsibility for ensuring constitutional order, law and the rights of citizens on their territory” until political stability was restored in Kiev.

According to the census 2001 of the year, the absolute majority of the population of Crimea (1,5 million of 2,4 million) are Russians, Ukrainians (570 thousand) and Crimean Tatars (240 thousand). The latter regularly advocate the creation of the Crimean Tatar autonomy.

Russian Foreign Ministry: Russia is extremely concerned about the latest developments in the Crimea

“On the night of March 1, unidentified armed men sent from Kiev attempted to seize the building of the Ministry of Internal Affairs of the Autonomous Republic of Crimea. As a result of the treacherous provocation, there are victims, ”the agency’s website says.

An attempt to seize the building of the Ministry of Internal Affairs was prevented.

“The latter confirms the aspiration of well-known political circles in Kiev to destabilize the situation on the peninsula,” stresses the Russian Foreign Ministry.
“We call on those who give such orders from Kiev to restraint. We consider it extremely irresponsible to further exacerbate the already tense situation in the Crimea, ”the agency said.

Recall, on Saturday, the Council of Ministers of Crimea decided to temporarily subordinate the units of law enforcement agencies in autonomy. The formations and units of the security forces will be temporarily subordinate to the authorities of the Autonomous Republic of Crimea, said Sergey Aksenov, Chairman of the Council of Ministers of the Autonomy. We are talking about the structures of the Ministry of Internal Affairs, the Security Service of Ukraine, the Armed Forces, the Ministry of Emergency Situations, the fleet, the tax and border services.
Ctrl Enter
Noticed oshЫbku Highlight text and press. Ctrl + Enter
We are
Results of the week. “While the enemy draws attack maps, we change landscapes, and manually”Moscow riot police began to hire fighters Ukrainian "Golden Eagle"
Military Reviewin Yandex News
Military Reviewin Google News
178 comments
Information
Dear reader, to leave comments on the publication, you must sign in.