We do not believe the Kremlin propaganda. Analysis of the Maidan government for the Russian intelligentsia


In Ukraine, everything is really good. The people threw off the corrupt Yanukovych and established true people's power. Ukraine is about to flourish. Expected a large influx of people of art. 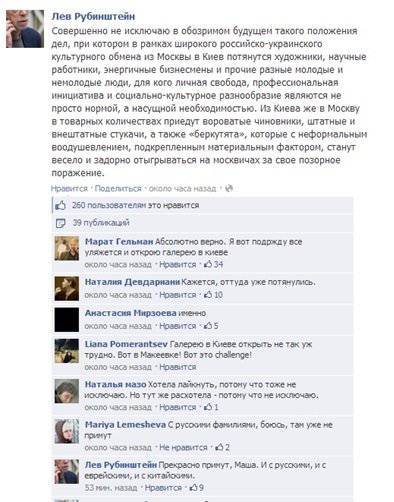 Moreover, there are no fascists and Bandera there, this is all false propaganda of the Kremlin. Liberals have nothing to fear the "Right Sector".

No extreme nationalism will allow, it is obvious. At the same time, these people are categorically forbidden to prohibit, marginalize. This will only lead to violence and the growth of supporters of "persecuted" ideas. Indeed, by itself, nationalism will not disappear if it is banned. The “Right Sector” should be switched to a mode of civilized parliamentary politics in ties, as it happens in European countries.

Oleg Yaroslavovich Tyagnibok is in fact not a Russophobe at all. This is a slander and dirty provocation of the Russian media, which have discredited an honest person.

... And now from the genre of journalism let us proceed to what we do - to facts.

Here we finally have a list of the government approved by Maidan (!).

First, no Klitschko. That is, “Fuck EU!”

Secondly, there is such a position in the government as the head of the Lustration Committee. She is represented by LGBT journalist Yegor Sobolev.

Vice Prime Minister for European Integration - ex-Foreign Minister, author of a ban on Ukrainian diplomats speaking in Russian, former chairman of the National Rukh of Ukraine Boris Tarasyuk. However, he wisely refused the post.

The head of the Anti-Corruption Bureau is journalist Tatyana Chornovol. The author of press releases for the anti-Moscow forces and the failed sacred victim of the early euromaidan.

Minister of Youth and Sports - avtomaydanovets Dmitry "Ear" Bulatov. Partner of the European journalist Portnikov in an intricate private video.

The Minister of Education and Science is the President of the Kiev-Mohyla Academy (Bandera Forge for Personnel) Sergey Kvit.

The secretary of the National Security and Defense Council is the commandant of Euromaidan, one of the founders (along with Tyagnybok) of Freedom, the neo-Nazi field commander Andrei Paruby.

Deputy Secretary of the National Security and Defense Council - not a professional professional revolutionary who worked anywhere for a day, leader of the Right Sector Dmitry Yarosh.

There is a touching unity of gays, neo-Nazis, scammers, psychos, human rights defenders and degenerates. As a unifying factor, eerie, cave-like Russophobia works.

Here is what you need to understand. With all the unifying force of Russophobia, it is only the third force who directs them all that can force the Nazi, a human rights activist and a homosexual to sit side by side at the same meeting, but not the voluntary desire for joint productive work. Need a puppeteer. Without this element, the whole company will instantly turn into spiders in the bank.

At the same time, it should be clearly remembered that the neo-Nazi group "Right Sector" by the order of the new leadership of the Ministry of Internal Affairs is included in the law enforcement system of Ukraine.

To get an idea of ​​what this means in practice - just admire. Watch carefully - suddenly something to miss.

And here the “law enforcement system” sings its songs:

Pay attention to the chorus. Obviously, “moskaliv knives” - this is exactly what Rubinstein and Gelman would like to admire in Ukraine.

Or what else to dig up, everything is so delicious. Maybe this is it: a bill on the decriminalization of Nazism crimes was introduced to the Verkhovna Rada by deputy Yarivorsky.

I articulate: to justify the crimes of Nazism.

It is necessary to understand that all this gathering is only a screen, a more or less humanoid person, behind whom the Ukrainian “shura” will act. Just like the actor Zakayev, who was mumbling about democracy, human rights and the victims of Stalinism, Basayev and Raduyev acted, who cut their heads, raped, killed and engaged in other human rights activities.

Statements of the “Lviv intelligentsia” in support of the Russian language against this background are no more than an attempt to stumble white feathers in the ass of Bandera's Snake Gorynych, so that at least it can be formally given out as a dove of peace and love.

Ichkeria from the Carpathians to the Don

And the last question.

Do “Western partners” understand this? But what about?

It was said: "We will not allow the revival of the USSR, and we have methods for this." Here they are these methods. All the same methods as in 33-th year of the last century.

A colleague believes that the Wild Field has returned.

I do not agree. According to the plan - no wild field. The plans - Chechnya Dudayev sample. Ichkeria

And on the territory of this Ukrainian Chechnya, the Right Sector will be the main military force - an organization created under the roof of the SBU of Nalyvaichenko times, that is, when the SBU acted in fact as a territorial unit of the CIA. Nalyvaychenko, by the way, has returned to his post now.

The result will be absolutely identical to what we got in Chechnya - a gangster republic. Only instead of Sharia, the national Ukrainian identity of the SS division “Galicia” will act on this territory.

There will be no economy on this territory except the economy of war. No production, except for the production of militants.

And in the end, when there will be enough of them, Ukraine will spew them out of themselves onto the territory of Russia. Read the interview of the same Yarosh. When he speaks of the "native Ukrainian" Belgorod and Rostov regions - this is not bluster. This is a funding application.

A person wants to work and shows that he understands what is required of him.

... True, it is still not entirely clear who for all this jihad against Russians will give money. The West seems to have no free pay.

And the Russians are not intellectuals, but ordinary people for some reason donate to the Golden Eagle and the defense of Sevastopol.