The first thing Ukrainian revolutionaries asked for money from Russia 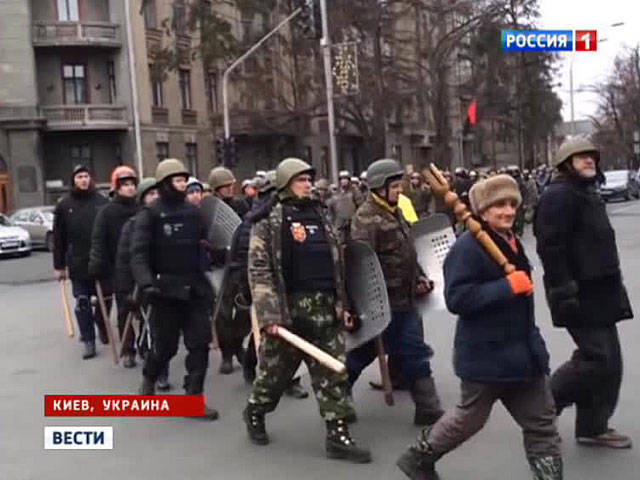 Standing on the verge of bankruptcy, a revolutionary Ukraine intends to ask for money from Russia. A statement on the planned talks with Moscow today was made by the Minister of Finance of the country's self-proclaimed government, Alexander Shlapak, practically the first thing after his appointment.

The composition of the cabinet, which is now, with the permission of the Maidan, intends to govern the country, approved the Council. Many ministers in it are somehow connected with Maidan. However, there is no more order in the country, and the neo-fascist militants feel best in this situation.

Constitution Square in front of the Verkhovna Rada from the very morning is buried in party flags. The building in a dense ring of self-defense, even drove an armored personnel carrier. Everyone is waiting for the announcement of the final composition of the new cabinet. However, its approval by the parliament is already a mere formality: the coalition will vote for any decision if it is made in the name of the revolution.

Even before the voting results appeared on the board, Arseniy Yatsenyuk walked through the corridors of the Rada, feeling like a full-fledged prime minister. Interview in English about those who have always been closer: "We want to see Russia as our partner, but not our neighbor." And promises to bring Ukraine out of the economic crisis with the help of an IMF loan. His mission will arrive in Kiev next week. Even implacable political opponents, with clenched teeth, promised Yatsenyuk support.

“Today it’s not about a political party’s interests, but about preserving the country, so we’ll support the prime minister,” Verkhovna Rada deputy Mikhail Chechetov said.

Visibility of the legitimacy of the new government provided the Maidan. The night before the candidates for ministers were presented one by one to the popular assembly. The crowd expressed their attitude with applause, however, the same Yatsenyuk many booed. Someone even shouted: "Bullet in the forehead." Formation on the principle of "what did you do for the revolution". So the leader of all the Maidan rallies was appointed chief of culture — this raises many questions on the street. Some people they have already seen in the orange government. Others, on the contrary, are completely unfamiliar.

The regional officials have doubted the professional qualities of the new officials. “There are certain specialists, and there are a lot of questions,” said deputy Sergei Tigipko.

Okay, the new Minister of Education Kvit. An activist of the radical nationalist movement "Trident" - the main striking force of the "Right Sector". At least he is the rector of the Kiev-Mogilyan Academy, which from the first day supplied the student crowd to the barricades. But now the head of the Anti-Corruption Bureau is a journalist Chernovol, whose fight against corruption was reduced to photographs of the dachas of the former ministers. Most of all claims to the head of the Ministry of Internal Affairs.

“The Minister of the Interior pulled out a voting card from me, which violated my rights. If he also violates the law, then this confuses me the most,” deputy Anna Herman is indignant.

Radicals accuse Avakov of inaction - he did not arrest the officials of the former regime. Moderate, on the contrary - that the country is mired in the Makhnovshchina.
“I read a report every day. This is Petrograd of the seventeenth year. I talked about these marauders. They are walking and robbing the buildings of the high posadovtsy,” member Gennady Moskal is dissatisfied.

Ukrainian radicals behave like real bandits. The coordinator of the "Right Sector" from Rovno, nicknamed Sashko Bely, who recently shook the machine in the administration, took up the prosecutors. The policeman who was in the office simply hid in a corner. The investigator, who was first dragged by a fighter for a tie, also got a slap.

The voice of the neo-banders is louder and louder. When a deputy from Crimea spoke Russian in parliament today about a tense situation there, the nationalists from Svoboda demanded to switch to Ukrainian.

"These cries of" Ukrainian "- one of the reasons for what is happening in the Crimea. Crimeans stood up for their rights, these rights are violated," - said the deputy from the "Party of Regions" from the Crimea Vitalina Dzoz.

Yatsenyuk promised: the rights of Russian-speaking citizens will not be violated. And the main task is to save the country from a split. These words of the new premier listened attentively to the American ambassador. He wandered for a long time on the sidelines of the parliament, then left under the guise of the Maidan self-defense fighters.