Ukraine in US plans directed against Russia ("Publico.es", Spain) 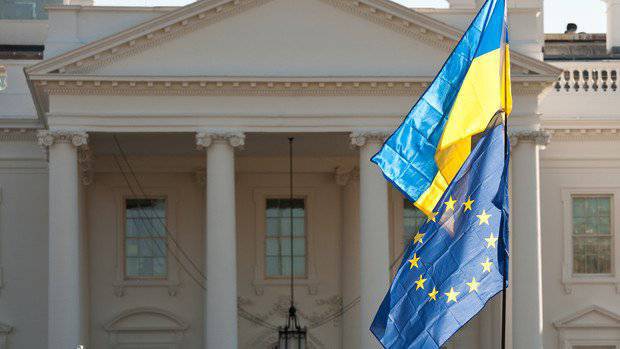 During a conference organized with financial support from the Chevron oil company, US Undersecretary of State Victoria Nuland said that, starting in 1991, her country had invested in Ukraine, one of the most strategically important countries, more than 5 billion dollars, and not at all to eradicate poverty. A few days before, a telephone conversation had been published (some believe that Russian special services are behind this) between Nuland, known for her anti-Russian views, and the US ambassador in Kiev, during which she spoke sharply about the European Union because of its inability to overthrow the Ukrainian government and reported on the use of a UN representative (an international organization playing the role of a puppet) to form a new cabinet. All this only confirms the assumption that Washington is behind the coup d'état directed against the legitimate (by the way, by Western standards) government of Viktor Yanukovych elected in 2010.

Of course, no one here will call it a coup d'état, because otherwise it will not be possible to recognize its legitimacy. The same thing happened in Egypt, when a military coup led by Al-Sisi committed a coup. On the other hand, it was surprising that Barack Obama called on the protesters for calm and dialogue with the government, and such “hawks” as John Bolton and Senator McCain (he even personally went to Kiev on Independence Square), urged them not to go to any concessions. In parallel with the Obama administration, is there another neoconservative government, or is the president himself playing a double game?

The reality is much more complicated and does not fit into statements like the fact that "the Ukrainians wanted to join the European Union, and their dictatorial government decided not to allow this by force." While the media presented the internal affairs of Ukraine as an international issue, exaggerating its consequences in order to facilitate the intervention of the Western powers (concerned about the state of democracy in Ukraine, and not in Saudi Arabia!), No one learned about the flight of Thai Prime Minister Yinguk Shinawatra to no one knows protests, or the massacre of Muslims in Myanmar. The monopoly on interference in the internal affairs of other states has its own name - American exclusiveness.

Let Ukrainian scientists study the nutrient medium that gave rise to a crisis of a similar scale, and how 20 thousands of people managed to determine the fate of 45 millions. Talk about a silent majority sounds at least unconvincing! It seems unthinkable that some “revolutionaries” put their lives at risk to join the economic union (EU), which is experiencing an acute crisis with millions of unemployed, disadvantaged and impoverished middle class.

The EU and the US tried to use the technology of the “Arab Spring” in its Libyan and Syrian versions: peaceful protests, in which armed groups with military discipline suddenly begin to take part, sowing chaos and horror and thus causing the feeling that the country was under the threat of bloody slaughter and civil war. And if dictators go to the harsh suppression of unrest, it means that they do not express the interests of citizens.

Yanukovych’s dismissal using such methods is a bad precedent for European governments, which face tens of thousands of protesters against corruption and looting their savings almost daily. 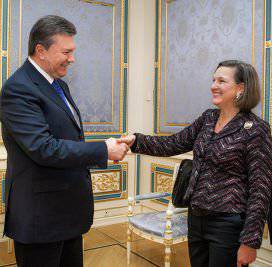 Brussels hides the truth because it does not tell the Ukrainians that:

1. The EU did not offer membership to the government of Ukraine, but a free trade agreement that would destroy the country's economy, which has one fourth of the black soil in the world (these soils do not require fertilizer), as well as coal, uranium and iron ore reserves. Its impoverished population thinks that in this part of Europe people live like in Sweden, without knowing that, for example, in Belgium every fourth child lives below the poverty line.

2. Currently, being in a crisis, the EU is not interested in joining Ukraine. If you accept Ukraine, then Georgia, Azerbaijan and Moldova will also apply for joining.

3. Countries such as Romania and Bulgaria, which have already joined the EU, have not seen any economic prosperity or political rights and live worse than 40 years ago. Socialist Bulgaria exported electricity and agricultural products to Turkey, and now its economy is in such a deplorable condition that thousands of its qualified specialists were forced to emigrate, the country itself lives exclusively through imports and has a huge debt.

3. In Belarus, together with Kazakhstan and Russia belonging to the Customs Union, the level of poverty and unemployment is 2%, and education and medical care are still free and universal.

4. In Ukraine, Brussels and Washington support the most reactionary right-wing forces, fascist groups (as they used to support the Taliban and Al-Qaida) and even anti-Semitic, accusing the government of being a “puppet in the hands of the Russian Jewish mafia”. Back in December last year, the communist parties of the former Soviet republics warned of the dangers of neo-Nazis in Ukraine, who are also gaining strength in Western Europe.

From Buddha to Lenin

The demolition of the monument to Lenin in Kiev, which symbolized the victory over German fascism, was as significant as the destruction of the Buddha statue in Afghanistan by the Taliban and the CIA creature, who were tasked with expanding activities in another zone of Russian influence. Control of Ukraine was one of the main goals of the United States. Already in 1979, Zbigniew Brzezinski, presidential adviser Jimmy Carter on national security, drafted a constitution independent of the USSR Ukraine. With its current interference in the internal affairs of Ukraine, Washington is trying to:

- To prevent the creation by Russia of the Eurasian Economic Community, the core of which was to be Ukraine. The community itself was supposed to start work in 2015.

- To maintain the successful strengthening of Moscow in the post-Soviet space, in particular, in Eurasia and Central Asia.

“To avenge Putin’s refusal to extradite Snowden, which caused serious damage to the United States, as well as to thwart the Sochi Olympics, in which Russia invested 50 billion dollars, and designed to demonstrate its athletic power and organizational capabilities.”

- Weaken Russia so that it could not confront the United States in other disputed areas.

- Open the Ukrainian market for Western goods, knowing in advance that Ukrainian products are uncompetitive.

- To cause nervousness in the Russian government, which must think: "Where will the next blow be dealt?"

- Represent Russia as an anti-democratic country where human rights are violated, and the West - as a paradise abode, although in reality, there is a rotten elite in power there. 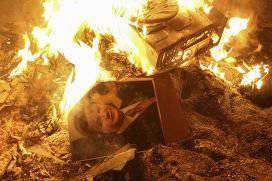 - Strengthen its position in the new Europe, since now Western Europeans are no longer obedient to the executors of its orders, and also to prevent the creation of the Paris-Berlin-Moscow axis. Let's not forget that Germany refused to participate in the invasion of Iraq in 2003.

To involve Ukraine in its orbit, the United States developed several plans.

Plan A. Bring to power the anti-Russian government, which will act as a counterweight to Moscow and will ensure the country's entry into NATO, as happened in Poland, Hungary, Slovakia and Romania. The advance of the North Atlantic alliance to the borders of Russia was suspended after a five-day war with Georgia, when Russia took the civilian population of South Ossetia under its protection. The coup d'état against Yanukovych facilitates the implementation of the following primary task: to change the leadership of the special services and the Armed Forces of Ukraine and reorient them to the Pentagon.

Plan B. If the future regime is not friendly, then at least let it turn Ukraine into a buffer state between Russia and the West. The United States prefers a weak and unstable Ukraine to a strong state, as well as having a partnership with Russia.

Plan B. The Yugoslav scenario for Ukraine with supposed dividing lines on ethno-linguistic (Russian / Ukrainian) and religious grounds (Orthodoxy / Catholicism), as Samuel Huntington wrote about this in 1996, based on a possible clash of Eastern and Western Ukrainians civilizations.

The US will also pursue a new policy: no intervention and undue risk; deriving maximum benefit from the social problems existing in the territories of interest to Washington.

Since gaining independence in 1991, Ukraine, due to its difficult geographical position, has been forced to maneuver between the West and Russia. Examples include Yanukovych’s refusal in 2011 of the Russian proposal to merge Ukrainian Naftogaz with Gazprom, despite the fact that the latter would supply gas to Ukrainian consumers at lower prices, or negotiations on Ukraine’s partnership with NATO and the signing of an agreement on lease to the Russian Black Sea the fleet naval base in Sevastopol.

It is up to him to decide whether Ukraine wants to become the second Cyprus or Greece within the European Union, or Russia's strategic partner. The choice of the future course will be crucial long-term national interests, which excludes the absolute loyalty of Kiev to both Moscow and the West.

The return of German imperialism

Having 287 US military bases on its land (there are three of them in Norway, and five in Spain), Germany was held hostage by the United States, and Chancellor Merkel had to travel to see her superiors in Washington about twenty times.

In the course of her famous telephone conversation, Nuland allowed herself to disparagingly respond to Germany, not understanding the risk for the energy industry that holds for her open conflict with Russia. But even with this state of affairs, Berlin’s current intervention in Ukraine’s internal affairs — in the form of support for millionaire Vitali Klitschko, one of the opposition leaders living in Hamburg — means a new milestone in Germany’s foreign policy aimed at:
Deputy State Secretary Victoria Nuland and US Ambassador to Ukraine Jeffrey Payette met with leaders of the Ukrainian opposition

- Spread its influence to the Black Sea and gain access to the Middle East through the Balkans. Already in 1917, Germany demanded that the Bolsheviks cede Ukraine to it in exchange for the world they so needed. Hitler also dreamed that Ukraine, Belarus and the Baltic republics were under German rule. 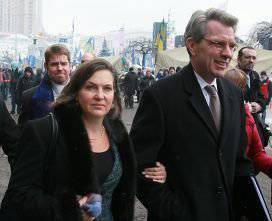 - Fill the vacuum that is formed after the USA leaves the various regions of the world, despite the fact that they continue to rule a weakened and fragmented Europe.

- The economic benefits of Ukraine (there are the best agricultural land in Europe, cheap and skilled labor, and practicing Christianity) should exceed the potential damage from weakening ties with Russia. In addition, we should not forget that Europe is the largest trading partner of Russia.

Russia will not allow a pro-Western regime in a country that plays a key role for its security. Where, how and how will she respond to these provocations? Maybe in Iran, undermining historical agreement with the United States on the nuclear program of the Islamic Republic, in Poland or Romania, depending on the supply of Russian gas.

Through Ukraine, Russia is expanding its Black Sea coastal line, strengthening ties with more than 4 millions of Orthodox, retaining its military base (which can also be airborne) and gaining access to abundant agricultural products.

The Kremlin power cannot lose this battle, but at the same time does not want confrontation during the Sochi Olympics, and therefore uses its soft power. Obviously, any government in Ukraine will have to respect the balance of interests in the same way. Ukraine’s economic dependence on Russia is so great that the owners of many large enterprises are Russian citizens. What is happening changes the balance of power. The next object of "controlled chaos" can be Belarus, and then the regions of the Russian Federation itself.

Ctrl Enter
Noticed oshЫbku Highlight text and press. Ctrl + Enter
We are
Situational analysis of the death of the MH17 flight (Malaysian Boeing 777), made on the basis of engineering analysis from 15.08.2014Results of the week. "This is not for you ..."
Military Reviewin Yandex News
Military Reviewin Google News
127 comments
Information
Dear reader, to leave comments on the publication, you must sign in.