On the course of the liquidation of the Ukrainian state 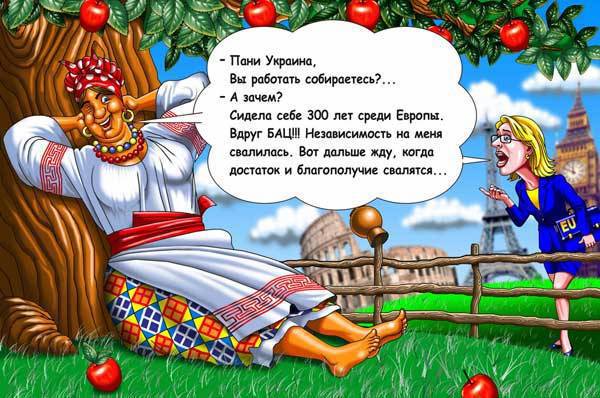 In Ukraine, not even an armed coup d’état occurred, but a collapse of the state. It’s not just one “social-political group” that overthrew another, which was worse organized and less prepared for political struggle. If it were so, the Ukrainian statehood could continue to exist, changing only those in power and redistributing government posts and economic benefits between members and sponsors of the winning organized criminal group. But the armed coup is different from the coup and seizures of power that occur from time to time in many countries. Everything is much worse.

Ukraine is rapidly moving towards the status of a “failed state” (in Western terminology, a “Failed state”, countries where central governments cannot control the entire territory or have no legitimacy in the eyes of one of their essential parts). This part of the Russian (later Soviet) empire, despite the preservation of the formal status of a subject of international law, is likely to lose its statehood and present appearance, which has remained a little more than 20 of recent years. And with any of the possible scenarios.

Now the only way to avoid anarchy and civil war are elections to the Verkhovna Rada and presidential elections. To calm the radicals, they are scheduled for May. However, the likelihood of holding them - and even more so at least relatively fair conduct - is complicated by many circumstances.

At first, it is necessary to seek means for elections. The Ukrainian budget is empty, and elections can be held only if some external force agrees to pay them. The so-called opposition leaders, who are going to form a “government of national unity”, are already asking for money from Western countries in the person of the EU and the International Monetary Fund (read, USA). Actually, those who prepared and provoked a coup.

Most likely, some funds will be allocated. The representative of the European Parliament, Elmar Brock, expressed himself ambiguously, saying: "It seems to me that there will be 20 billion euros on the table." But even if Brock’s 20 of billions only seemed to be, securing his success is extremely important for Western countries. And the only way to consolidate the success of an armed coup would be to give the new government a legal status. So the election will be financed.

Whether the deliverance of Ukraine from an imminent default will be financed is a more complicated question. Neither the EU nor the IMF have “extra money”. But the financial collapse of Ukraine, if it happens before the elections, can lead to uncontrollable processes, which themselves can put a cross both in elections (conditional “democracy” that can legitimize the results of the armed coup) and in the unity of Ukraine.

However, the allocation of money on enslaving conditions (raising utility tariffs, domestic gas prices, making Ukraine’s chemical industry profitable, reducing government spending and social obligations to the population) —the IMF loan can give the very result of the election, which is counted by western countries. Therefore, before the May elections, Ukraine will be pulled out of the financial abyss, in theory, the European Union, which is already limited in funds, should be. And then - the new government will accept the enslaving conditions. If it will have the “correct orientation” towards the West, it will have nowhere to go.

Secondly, the power in Ukraine was overthrown not by Yatsenyuk's rabbit, Klitschko’s boxer, Yulia Tymoshenko’s not a “woman with a scythe”, and not even a Pygnybok, who began to play the role of the Fuhrer on the instructions of the SBU, but eventually got a taste. All these people are now going to form a "government of national unity." But in order to go to the Parliament, they present documents to activists of right-wing organizations. It was the latter who overthrew the previous government, and now it is very difficult to persuade them to stand aside.

Nationalists are hardly satisfied with the transfer of real power to those who have already been to this power many times, and now they would like to return to power on their shoulders. And we must understand that the loudly voiced idea of ​​lustration applies not only to representatives of the Party of Regions and the Communists. First of all, it will be turned against Yatsenyuk and Tymoshenko. Klitschko does not count. Boxer continues to delight the audience with his tongue-tied and in general no one takes it seriously. Yulia Tymoshenko, contrary to the legends about her wild popularity and the hypnotic impact on voters, has long been unable to convince anyone of her sincerity. In the near future, she is going to improve her health in Germany. Perhaps there she will receive informational and financial support. But it’s very difficult to regain the support of people by messing up with the Ukrainian authorities. Here, the nationalists, eliminating Tymoshenko from power, will in no way contradict the opinion of the majority of Ukrainians.

Exactly the same radicals who took power will not accept its separation with representatives of south-eastern Ukraine. They simply will not be allowed into power, even if elections are held. It doesn’t matter what: lustration, falsifications, criminal prosecution, physical elimination - everything fits. The power taken by force - no one will give up.

This must be understood by all who, like the head of the Kharkiv administration, Mikhail Dobkin, announce their participation in future elections. Dobkin’s decision to run as a “candidate from the South-East”, of course, channeled protest sentiments among the inhabitants of the South-East and prompts them not to resist the central government seized by the nationalists. Perhaps this will push the new phase of civil confrontation by several months. But hoping that those who have seized power by force will agree to share it without pressure from another force is very difficult.

Thirdly, at least in the Crimea, there will be no elections anymore. Power in Sevastopol and almost the entire peninsula passed into the hands of the Self-Defense Committee. In Kerch and Sevastopol, Ukrainian flags are lowered, Russian flags are raised instead. The people who gathered at the city council of Sevastopol actually forced the people's representatives to approve the head of the city Russian citizen Alexei Chaly. The new government and the formed self-defense companies are engaged in the transition of the Crimea to self-sufficiency and are preparing for defense. The Russian Black Sea Fleet is transferring its military units in the Crimea to an enhanced security regime.

In Odessa, on the Kulikovo Field, thousands of People’s Council were held. Despite the position of the governor and mayor of Odessa, who urged citizens to recognize the central Kiev authorities, Veche accepted an appeal to Russian President Vladimir Putin with a request to express a clear position of Russia regarding the situation in Ukraine. The participants chanted "Russia!" Also in the coming days Igor Markov, who is able to lead local resistance, may be released.

It should be said that the armed coup dramatically exacerbated all the contradictions that have accumulated in Ukraine for a short time of independence. And no election can eliminate these contradictions. Ukraine is already divided, and after the coup, both parts of it are harder to persuade to compromise. And since only a compromise between the two halves allowed to preserve the integrity of Ukraine - now its state unity is called into question.

We must not forget that the current coup in Ukraine was prepared, provoked and supported by Western countries. Attempts to quickly hold for signing documents on the association of the pre-default state with the EU at first glance looks strange. Signing these documents would destroy the economy of Ukraine. Non-signing could not but cause civil conflict. And the conflict itself began actively fueled and maintained. It looks completely illogical if we forget about the new strategic concept of NATO adopted in 2010, one of the main institutions that hold together the Western world. According to it, NATO is preparing for action only in those countries where it is required to "settle" the internal civil conflict. And as long as there is no such conflict, the NATO Joint Forces will not conduct combat operations and enter foreign territory. This means that while in Ukraine there was no open confrontation, it could not be the object of NATO action. And as it goes down to the status of a “failed state”, Ukraine potentially becomes an object for “crisis management”, which can be assumed by the Western armed forces.

Russia will still have to express its position on everything that is happening in Ukraine clearly. By silence and lack of support for the part of Ukraine that wants reunification, one can try to avoid civil conflict. The price of this will be the betrayal of those who believe in Russia and see their future with it. The price will be our common future.

Ctrl Enter
Noticed oshЫbku Highlight text and press. Ctrl + Enter
We are
The world we leave, the world we enter, and the world between them"Failed" states in the plans of Washington
Military Reviewin Yandex News
Military Reviewin Google News
103 comments
Information
Dear reader, to leave comments on the publication, you must sign in.