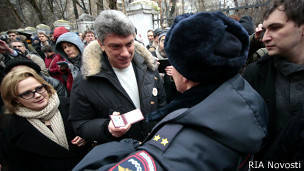 "How many times have they told the world ..."
I.A. Krylov

Opposition politician, co-chairman of the party RPR-Parnas Boris Nemtsov, in an interview with the Russian service Bi-bi-si, spoke about his vision of the situation in Ukraine and the influence of the Maidan on the Russian opposition movement.

BBC: What lessons can Russia learn from the situation in Ukraine?

Boris Nemtsov: Maidan on 100% was provoked by Yanukovych. Any street protests, both in Ukraine and in Russia, are provoked by the authorities. This is immense theft, greed, and immense lies and cynicism, this is the usurpation of power, this is the cruel treatment of citizens - all that was in Ukraine, that is, in Russia.

I am only afraid that the regime, judging by the sentence imposed on the prisoners of Bolotnaya, did not learn any lessons, but decided to tighten the screws and increase the repression as usual. That is, Putin finally and irrevocably made a bet on the bayonets, on the riot police, on the batons. And the number of political prisoners will grow in the country. This kind of reaction — absolutely inadequate, anti-Russian, insane — this trial is fatal to Putin and his regime.

BBC: The Russian authorities are not afraid of mass protests and the same turn of events as in Ukraine?

BBC: What are the lessons for the Russian protest movement in what happened on the Maidan?

BBC: Is it possible in Russia the option of self-exclusion of the president from power?

Boris Nemtsov: Ukraine is not Russia ... But I don’t have any doubts that Putin will end up badly, continuing the actions he demonstrates.
The patience of the Russian people is much greater than the patience of the Ukrainian people, and Putin has more money than Yanukovych - that’s all true. But even to the patient Russian people, in the end, all this will get sick, and the people will come out. And if he thinks that he will hide behind the riot police with shields and batons, just like Yanukovych behind the Berkut, then he is deeply mistaken.

He absolutely did not learn any positive, no normal, no honest lessons from Maidan, and he does everything so that we have our Maidan.

BBC: The last year and a half, the protest movement in Russia has faded ...

Boris Nemtsov: The protest movement is the work of the masses. It is like a living organism: sometimes there are ups, sometimes recessions. But if someone thinks that the protests are over, they are mistaken.
When the people do not hear the power, when the parliament is suppressed, when censorship in the media is rampant, when no sensible proposal is considered, then the people and the only way to be heard and act is to go out.

In fact, the street and the protest is the work of Putin and Yanukovych. They are 100% responsible for what is happening, including for the fatal, bloody developments. Instead of having a normal dialogue, finding compromises, they force the people to go out and protest. Because people do not hear differently. So it was in Ukraine, and so it is in Russia.

As for the recession of the protest movement, yes, now a recession ... There is a recession behind the rise, behind the revolution there is a reaction, all this is understandable. But it is obvious that this is how to cling to power with your teeth when your rating falls, when everyone hates you, when they think that you are robbing a country ... No matter how hard the string is, do not fight, but the end will be.

The badger as a comment
What happiness that is in stories Russian classics on whose quotes you can rely. All the great fabulist. "Ay, Borka, to know, she is strong - the master's hand is visible!". May the Russians forgive you for all your base nature, Borka, and will reward you in the end with what you deserve. For correctly you said, how much rope does not curl, but it will be the end. No matter how active and grateful you are to lick your transatlantic hand that feeds you, we live for lacking money, we love and die. I hope from the same rope.
Skomorokhov Roman (Banshee)