Yanukovych has put a “pig” on the EU. Bandera 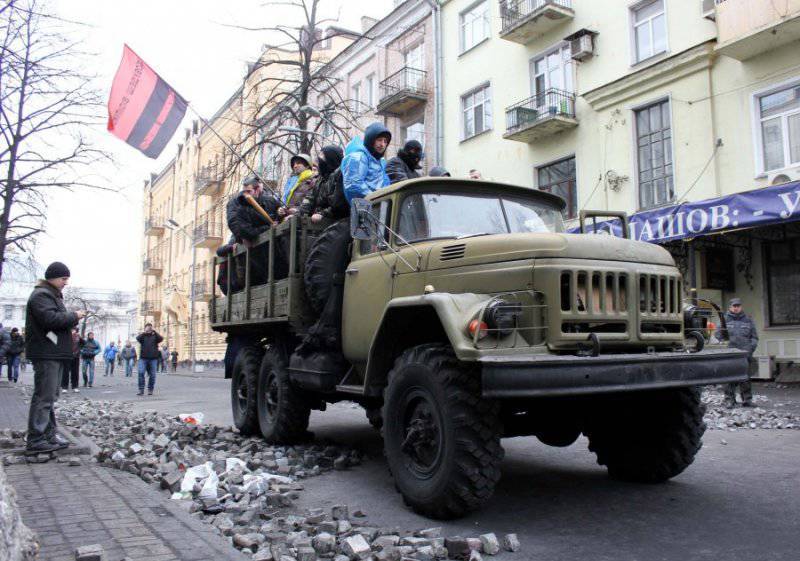 Victor Yanukovych’s night talks with the foreign ministers of Germany, Poland and the representative of France, at which he accepted all their conditions, left the winners with very gloomy faces.

Putin sent to this historical meeting Vladimir Lukin, a person of authority, but only an ombudsman. That is, Russia at this meeting, as it were, and ... was not. Lukin did not sign an agreement between Yanukovych and the “trotushka” on the transition to a parliamentary-presidential form of government, dictated to him by the European Union. In fact, it was the ultimatum of the European Union, and he pushed it, why was there no feeling of deep satisfaction?

Yanukovych, out of stupidity, softness, and maybe even for some reason, made such a mess with lard that the European Union didn’t like it, but he would have to eat this mess.

On the eve of these events, US Vice President Joe Biden set the EU the task of creating a pro-European government, and by default, Bandera and anti-Russian. This task is already in question: Russia appeared in the negotiation process, and after an unexpected call from Yanukovych to Putin right at a meeting with Western ministers. Putin, fortunately, was on the spot, and immediately sent "looking" Lukin. With Russian participation, it is difficult to create something anti-Russian.

Agreement with Yatsenyuk-Klitschko-Tyagnibok Yanukovych gave them, in fact, plunging into chaos Kiev and already out of his submission regions, captured militants Bandera "Right Sector". And he agreed to “early elections” - this “agreement” in this situation is worthless. But he kept the presidency, and managed to fly to Kharkov. The latter, perhaps, was already a special operation, the President’s car was shot at ...

As we remember, at the Vilnius Summit, the West hoped to get all of Ukraine in a good condition for the Euro-Association, but what does it receive today? Immersed in chaos, captured by Bandera militants, western Ukraine, a strange Verkhovna Rada (without opposition, voting under the supervision of militants), whose decisions are also illegitimate without the signature of the president. And the prosperous southeast of Ukraine refused to submit to the “illegitimate” Kiev Rada, held a congress of deputies of all levels in Kharkov, and hid behind the politically acting president, who had already declared the Kiev Rada “gangster”.

In fact, “Europe” received for the Euro-Association what voted for the “European choice” on Euro-Maidan, and the industrial south-east of Ukraine received a legitimate reason to refuse the colonial Euro-association.

But the fact that “Europe” has received, has a very unpleasant neo-Nazi flavor. Bandera militants, their secret and main argument, the American embassy in Kiev for a long time kept under wraps, used as a peaceful "people", but was forced to put into action in January to turn the tide in Kiev. Now the secret became clear, the Bandera gin with the mania of the “National Revolution” broke out of its bottle, and what to do with it now, with what to eat it now, will have to think the European Union. Lavrov has puzzled him with this problem: the Kiev opposition is “incapable of negotiating” ...

And what would happen if Yanukovych “cleared out” euromaidan, even the late Bandera? It is not difficult to guess: today all the Western media would have been famous for it as a “bloody dictator” and a “butcher”, like Milosevic. Even now they are his mother, but in a different way: the West has just signed an agreement with him. The Bandera army would have been activated as a people’s and liberation, and would receive the full support of the West in overthrowing the “Yanukovich regime”, which would be exposed to the world worse than the fascists - in general “the butcher” who filled the Maidan with corpses.

The legality and necessity of stripping Bandera Maidan, about which everyone speaks, would not change anything, the West has always prepared double, and even "triple" standards for this case.

Today it is clear why Yanukovych stopped the "Golden Eagle" at the very lair of Bandera on the Maidan. This is not about the mythical call of Biden to Yanukovych, everything was much simpler and more terrible: Bandera retreated to his arsenal, and the unarmed Berkut could be point-blank shot by the militants. The next day, the Berkut, losing its fighters, was forced to retreat under Bandera shots, and even the Berkut’s urgent weaponry could not change anything: there was a multiple superiority of forces on the side of the militants.

The quick release of Yulia Tymoshenko in Kharkov, moving her to Kiev without the necessary formalities, also resembles a coordinated special operation. In Kiev, she will have a difficult job of controlling “extremist elements”: this item is recorded in the night agreement between the president and the opposition, and it is not carried out by the opposition, the European Union was forced to agree with Moscow, Putin spoke about this with Obama. This is a very difficult job ...

In general, everything that happened after the failure of the “Vilnius Triumph” (and maybe even “Vilnius” itself) seemed to be coordinated by Yanukovych with Putin, or his analysts. Otherwise it is difficult to explain how Yanukovych managed to get out of Kiev, and even with the powers of the president.

For one breakdown of the Vilnius completely colonial “euro-association” of the whole of Ukraine, Yanukovych will be forgiven a lot, over time, but “Europe” will never forgive him for breaking such a “euroroma”.

Instead, she received the razoroshennaya wasp Bandera's nest, it revealed its neo-Nazi face to the world, although it was diligently masked by the “nationalists” American embassy, ​​and the European commissioners were “peaceful protesters.” Now what should the European Union and Yulia Tymoshenko do with these militants?

And the south-east of Ukraine is consolidating precisely the threat from the Bandera party, even Yatsenyuk and Klitschko, not to mention Pyagnibok, ranked as supporters of Bandera, is quite demonstrative. Therefore, cooperation with the Pro-Bandera government of the Rada is physically impossible for the southeast, but legally illegitimate. And Russia is near, and can provide not only legal assistance ...

The situation, of course, remains difficult, however, it is now difficult for the West. He will have to eat porridge, which Yanukovych has brewed, and this was not part of his plans ...

Ctrl Enter
Noticed oshЫbku Highlight text and press. Ctrl + Enter
We are
Situational analysis of the death of the MH17 flight (Malaysian Boeing 777), made on the basis of engineering analysis from 15.08.2014Joe Biden at the Munich Conference: Wars Against Iraq, Afghanistan and Libya: Major Success
Military Reviewin Yandex News
Military Reviewin Google News
77 comments
Information
Dear reader, to leave comments on the publication, you must sign in.