A beautiful example of ideological struggle in Ukraine 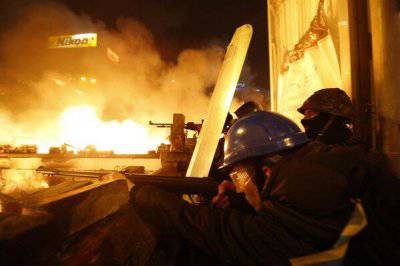 Looking through the sites of maydanutyh, constantly stumble on news. And, as a curious person, I read. Probably, it reminds of digging in manure in search of the sister of the pearl that was found some time ago by a rooster, but ... Curiosity and the desire to know different points of view pushes for excavation.


The news I read today gave me an idea: what should a simple Ukrainian think about Russia and others like her? I will not change anything, just copy and that's it.

President of Ukraine Viktor Yushchenko (2005-2010 years) believes that the "Russian plan" for events in Ukraine is to liquidate the Ukrainian state, reports PressOrg (http://pressorg24.com) with reference to a statement released on the official page of Our Ukraine "on Facebook.

Speaking about current events, V. Yushchenko noted that the Verkhovna Rada should urgently resume work and hold an emergency meeting at which the Act of National Freedom proposed by the society and the 1 December initiative should be supported in order to start overcoming the political crisis. the integrity of the country.

"The Verkhovna Rada should issue a number of key political documents that should define the essence of the conflict between the two courses - European and Eurasian. Also, the 2004 Constitution of the year should be returned to the parliament and a government of national trust should be formed in accordance with it. Ending violence should be the first prerequisite any kind of dialogue. Until that time, unfortunately, the parties to the dialogue, both from the authorities and the opposition, did not offer a realistic plan for overcoming the crisis. The other two participants The events that take place are the European Union and Russia, while the degree of Russian intervention and the interest of the Russian side in involving Ukraine in its orbit - the so-called Russian factor - were underestimated by the authorities, the opposition and the European Union, ”the politician believes.

Now, in his opinion, the conflict, “which is called political and is being tried to be resolved by the next distribution of posts,” needs to be overestimated and “adequately called it - a struggle for the sovereignty and integrity of Ukraine”. As V. Yushchenko noted, "at all times the fighters for Ukraine (Mazepians, Bandera, Petliurists) tried to marginalize as criminals" and today "they label the terrorists of Ukraine and radical gangs on the patriots of Ukraine on Maidan."

"The development of the Russian scenario, which is either in the poverty of the whole country, or because of the escalation of the conflict in federalization, the creation of a puppet government, must be stopped immediately. We must create a permanent mission of the European Union, which will promote the return to European integration as a guarantee of preserving the integrity of Ukraine, returning to peace and stability and further reforms in all areas. The European steps for Ukraine should be the approval of a political association, a free trade area and the introduction visa-free regime; at the same time, the EU should impose financial sanctions and other restrictions on terror organizers against Ukrainians. 15 billion from the Russian authorities is a resource for destabilizing Ukraine. The Russian plan is clearly visible - it is the elimination of the Ukrainian state ", said V. Yushchenko .

So you can turn everything upside down. At the same time to keep faith in themselves and the wolves, and the sheep, which will soon devour those same wolves. Many of the colleagues in the Military Review do not fundamentally read the opinions of the opposite side, and this is often very useful. The enemy of the Ukrainian state is very serious, prepared and owning technologies of fooling, so-called. the masses ...