Is it worth splitting Ukraine. Russia dominates, not sharing, but uniting 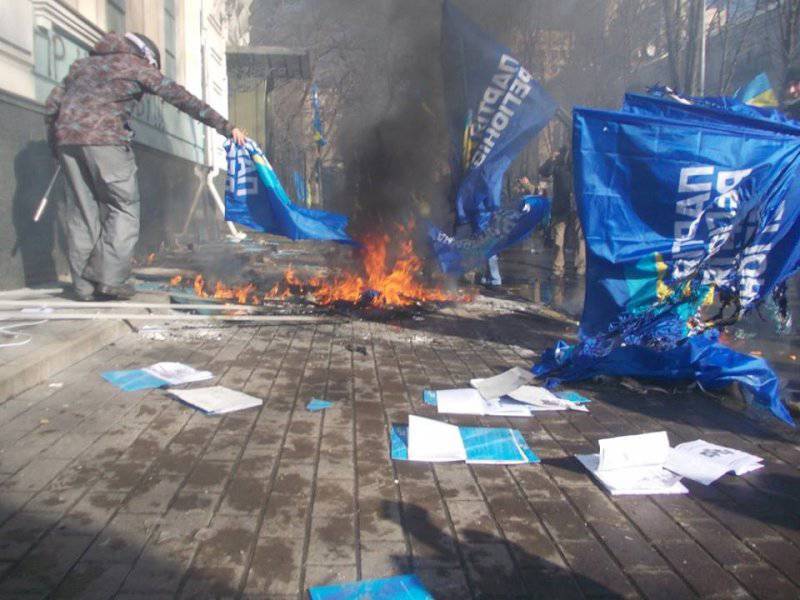 The question in the title is rather complicated. But note: I say it is “worth it,” since it is quite clear that the decision on a possible split will be made by politicians, and not by the people of Ukraine. Moreover, I think: the people of Ukraine would have decided to split a long time ago.

From time immemorial I said: the majority of Ukrainian citizens are in their native language, in their native culture they are Russian. But only recently I learned how large this majority is. And already quoted several times the data of the famous sociological service Gallup. In order to avoid misunderstandings that have happened more than once during the discussion of these data, let me remind you how they were received.

In 2008, the Gallup service conducted a large sociological survey of the state of affairs throughout the post-Soviet space. Many very different aspects were investigated at once. Therefore, we prepared large questionnaires. The respondents themselves had to fill them in - naturally, in the presence of agency representatives, so that they could prompt, if necessary, explain the exact meaning of this or that question. These questionnaires, of course, were prepared in two versions: one in the language of the title for the area where the survey took place (it took place in all fifteen former Soviet republics, plus some of them have officially recognized national regions — say, There are a couple of dozen of these in Russia, but in all the languages ​​of all these republics and regions sheets were prepared, they were distributed according to the title language of the locality), and besides, they also prepared sheets in ordinary Russian literary language. And each survey participant chose for himself whether to answer him in the local language or in Russian. Thus, the Gallup (?) Service received data not about what language people call their mother tongue, but what language they really speak, what language they actually use in everyday life.

So, in Ukraine, five sixths of the surveyed population chose to answer sheets in Russian. It is clear that agitation is not in vain. Judging by the discussions on blogs and forums, quite a few people are quite sincerely convinced: since they live in a republic called Ukraine, it means they must use what is now called the Ukrainian language, and if they do not use it, they even experience some kind of moral guilt. they say, how could I give in so much, so Russify. Nevertheless, it just shows that they are mostly Russian.

It is clear that most of the citizens of Ukraine, to put it mildly, are not very happy with the fact that they are proclaimed by people at best of the second grade. We are not satisfied with the fact that violent Ukrainization is taking place in the country. By the way, the Ukrainian dialect of the Russian language is constantly shuffled in order to bring it closer to the Galician dialect of the Polish language.

Undoubtedly, if Ukraine were given the opportunity to express their will in a referendum on a properly formulated question, then these citizens would most likely consider that the joys of living in one state in no way redeem the shortcomings of such a life. That is why all attempts to hold referendums on key issues of the state structure are somehow disrupted. Millions of signatures were collected for a referendum on the state status of a normal literary Russian language, not only its Ukrainian dialect - but the referendum was never appointed. All attempts to collect signatures for a referendum on the choice between the European and Eurasian Union are blocked - up to the fact that several times the court forbade the collection of these signatures. Actually, just from the fact that these referendums are broken or blocked, it is clear what the result may be. If there were even the slightest chance that the result of the referendum as a whole would suit the current government, and the “mistakes of fortune” could be corrected by manual dexterity (that is, the results of the referendum will differ from the wishes of the authorities within what can be falsified ), then undoubtedly the referendums would have been held a long time ago. Similarly, any attempts to change the state structure of Ukraine from unitary to federal are blocked. It is by the fact of blocking all these events that it is possible to determine what the inevitable outcome will be.

Accordingly, I think that now a very significant part of the citizens of Ukraine will consider current events as an excuse to finally save the Russian majority from the Galician minority and lead a normal life. So the split of Ukraine in the current circumstances seems to me very likely.

Moreover, I suppose that this split would be to some extent beneficial for the Galicians too. Firstly, although their oil fields are old and pretty well developed, and besides, the oil in them is heavy, highly paraffinic, and therefore difficult to produce - but with the current market conditions they would have had enough of developing these fields for more than a decade less safe living. In addition, they would get rid of the constant pressure of the Russian majority, since the action is equal to the opposition - the more the Galicians are trying to bend the Russian under themselves, the more the Russians resist. In addition, the Galicians for many centuries in a row remained in status, in fact, the servants of the Poles — therefore, even now a significant part of the Galician slogans boil down to the desire to become servants in Europe again; and in the case of secession, Galicia will soon again fall under Polish control, and the dream of those who scream about European choice will come true, meaning by this choice the opportunity to travel to work west.

Western Europe, this split is also beneficial. That is, of course, dumb, that the main European value - pipes for supplying Russian gas - is under the control of a herd of thugs, but after all these scumbags are now sitting on the same pipe and each time they threaten to block the valve or anything at all. . And when Ukraine is divided, the Galicians themselves will be under serious control of the West. Europe will, at the very least, know who will unscrew their heads if something gets stuck with precious pipes. Therefore, in the final analysis, the division of Ukraine is also beneficial to the European Union.

And to whom it is categorically unprofitable?

First, the Washington Regional Committee. He uses, as a matter of fact, for a long time already the only source of his power, differences between others. The more of these differences, the more profitable for him. If people start fighting among themselves, then Washington gets the opportunity to divide and conquer.

But in the long term, the division of Ukraine is unprofitable by the Russians themselves. Galicians once were also Russian, and so far not all of them have forgotten about it. If we now completely give up Galicia and give it to our own destiny, then we will break one of our main rules: Russians do not give up theirs.

I myself from the moment when the idea of ​​independence of Ukraine first moved from the area of ​​idle talk to the area of ​​possible, it seemed that the best way out for us all was to separate from Galicia. Moreover, my own election campaign in 1994, when I was running for the Supreme Council of Ukraine, I conducted under the slogan "For independence from Galicia, for reunification with the rest of Russia." But now, having become a couple of decades smarter, I suppose that this position of mine deserves the name of a capitulatory one. Even if the vicissitudes of modern political destinations force us to give Galicia its own difficult fate for some time - we are still morally obligated to look for ways to correct the consequences of the experiments on the Galicia mentality that have been conducted since the middle of the 19th century, and someday reunite not only Ukraine , but also Galicia with the rest of Russia.