Ukrainian opposition: the split is deeper and wider ... 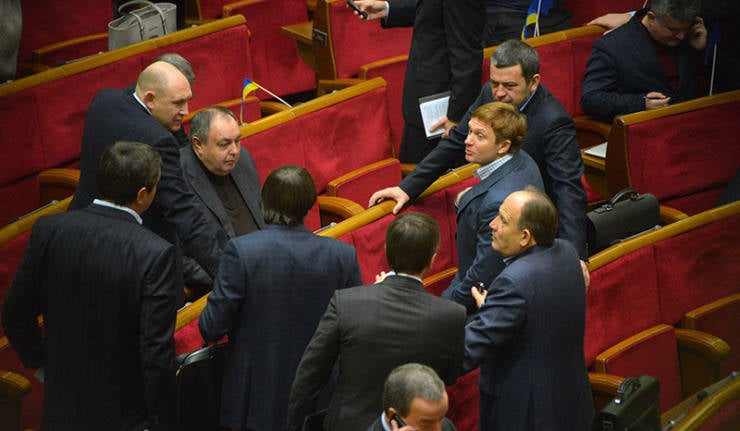 © Photo: "Voice of the Capital"

At the regular session, the Verkhovna Rada was going to consider amendments to the Constitution. However, all this remained to be intentions, because representatives of the Ukrainian opposition could not agree on the main issues. The foreign ministers of the European Union member countries also did not reach an agreement at a meeting in Brussels on measures regarding Ukraine, but were unanimous that Ukraine would not receive economic assistance.

Ukrainian deputies once again demonstrated their inconsistency. Once again, they were unable to reach a compromise and take the much-awaited decision on amending the Constitution. However, this time the reason is not at all in the opposition of the Party of Regions and its opponents - because the pro-government party has withdrawn itself from work. Disagreements arose between the opposition parties that were involved in the drafting of the new Constitution. This state of affairs clearly indicates that each of the opposition leaders is doing everything possible to rewrite the basic law for themselves. It is not surprising that they are unable to agree - the goals are different for everyone.

The leader of the UDAR party, Vitali Klitschko, for example, agrees to preserve certain presidential powers, but at the same time proposes to exclude the clause that the presidential candidate must reside in the state for at least 10 years before the election. Obviously, this will help him to open the way to the presidential chair (recall, Klitschko has a residence permit in Germany).

Former athlete has repeatedly tried to meet with Yanukovych. And now, when everything is relatively quiet on Independence, and the people are awaiting compromises in the constitutional process and the formation of the government, he decided to meet with the president again, pretending that he was trying to agree on political debates. First, Klitschko called the guarantor on the Maidan. Yanukovych seems to have agreed, but only on TV. A little thought, Klitschko said that he could accept such an offer only from presidential candidate Yanukovych, and not from the president. Thus, it is clear that the duel did not work.

Moreover, experts say, it could not happen in principle. Especially after the scandal associated with the recording of a telephone conversation of the Deputy Secretary of State of the United States, Victoria Nuland, who did not quite correctly put herself in the direction of the European Union. Now it is quite obvious that the Germans will fully support Klitschko, because America chose Yatsenyuk.

It should be noted that after the aforementioned scandal, the contradictions in the Ukrainian opposition only intensified. And it is no coincidence that after the publicity of this telephone conversation, the leaders of BLOW and “Batkivshchyna” could no longer hide the fact that they had sharp contradictions about the basic law. And it was precisely these contradictions that caused the work of the parliament to stop.

But in reality the matter is not even in the constitution. It is only a mirror of the Ukrainian “revolution”, which reflects the egoism of all those who are trying to become its head. For example, he does not even hide the fact that he doesn’t need any model of the state, except for an authoritarian one. And as long as he has even the slightest chance of a presidential chair, he will defend his position.

Klitschko is also used to working alone, especially with such and such friends.

And only one Yatsenyuk still insists on the full priority of the Verkhovna Rada. He calls to deprive the president of influence on the executive authorities. Thus, he goes not only against Klitschko’s opinion, but also against Tymoshenko, who, in a letter, urged her party members not to vote for changes to the basic law and to stop all negotiations with Yanukovych.

Meanwhile, it was Yatsenyuk, who for several months remained in the shadow of his more charismatic associates, is currently one of the most realistic candidates for the post of prime minister. He is supported not only by the Ukrainian president, but also by Western politicians. True, the opposition leader himself refused the proposed position, saying that he would become the head of the new government only if it was fully formed from opposition politicians.

Recall a few years ago, Yatsenyuk said that he was completely satisfied with the work in the legislative branch, and that he was not interested in the post of prime minister. However, time has shown that the politician was not entirely honest. In 2009, he headed the "Front for Change" and became one of the official candidates for the presidency. Then his ambitions were very big. However, the politician lost those elections, he also refused from the premiership and went to the opposition. And already in 2012, his party united with other opposition forces on the basis of the Yulia Tymoshenko’s Batkivshchyna party. Soon, due to well-known circumstances, the leadership of the party passed to Yatsenyuk.

According to political analyst Oleksandr Fomenko, Yatsenyuk now may well become the most convenient figure that will suit not only the Ukrainian political elite, but also the foreign one. According to the expert, lately Yatsenyuk has proved himself quite well as a man with ambitions. The Party of Regions’s stake on it is connected with the fact that it is the least evil (not to offer Tymoshenko’s premier chair). As for the choice of the West, it is also quite obvious, says Fomenko. Yatsenyuk is fluent in English, and is ready to repeat everything he says there, clearly and with expression. But seriously speaking, Yatsenyuk really enjoys the confidence of Western politicians. In addition, the leader of "Batkivschiny" has a decent political experience, because Yatsenyuk was the foreign minister, the chairman of the National Bank, and the head of the Verkhovna Rada.

Klitschko, as we know, has no such experience, because he came to big politics from sports. It is also believed that Yatsenyuk has more connections with oligarchs. Therefore, says Fomenko, one of the possible scenarios for the development of events will be the premiership of Yatsenyuk under the nominal Klitschko presidency. Such an arrangement of political forces could become a kind of compromise between America and the European Union.

According to Valery Solovya, a professor at Moscow State University, after the scandal with the conversation, the appointment of Yatsenyuk as the head of government may be perceived by some as an attempt by Americans to establish a dictate in Ukraine, which is a direct threat to its independence. On the other hand, says the scientist, the Americans just voiced what everyone knew. In addition, it can give him extra points, because it means that he is the person who can manage to negotiate with the Americans.

However, there are certain difficulties here, which are connected with the demands of Tymoshenko to immediately stop negotiations with the authorities. On the one hand, if Yatsenyuk fails to fulfill this requirement, he may be removed from the party’s leadership, and on the other, in case of refusal to negotiate, the politician may discredit the Ukrainian opposition in the eyes of the western political elite and lose his chances of getting a premier.

Yuriy Solozobov, an employee of the Institute for National Strategy, stresses that the Ukrainian opposition has different leaders and does not have unity. Klitschko does not want to lay claim to the presidency, since this limits his political ambitions, Tymoshenko is still in prison, and therefore cannot drastically influence events. The differences within the opposition itself are much sharper than between the president and the opposition. Therefore, we can expect many more problems and contradictions.

The situation that has developed in Ukraine was also discussed by the heads of foreign ministries of the EU countries, but no specific decisions were made either. The European Union has declared that it is ready to support the political process in the country, but there can be no talk of financial assistance in this case. According to Oleg Lebedev, First Deputy Chairman of the State Duma Committee on CIS Affairs, Relations with Compatriots and Eurasian Integration, the International Monetary Fund is a major player in this field. And he has certain requirements for Ukraine, in particular, an increase in utility tariffs. And this is unacceptable both for the Ukrainian authorities and for the opposition. The loan is possible only in the case of the formation of a new government with Yatsenyuk and Klitschko, however, they refused the posts offered to them. Thus, it is obvious that the opposition forces themselves create barriers for the country to obtain a loan.

Ctrl Enter
Noticed oshЫbku Highlight text and press. Ctrl + Enter
We are
Situational analysis of the death of the MH17 flight (Malaysian Boeing 777), made on the basis of engineering analysis from 15.08.2014Results of the week. "Well, do not change me because of every idiot!"
Military Reviewin Yandex News
Military Reviewin Google News
132 comments
Information
Dear reader, to leave comments on the publication, you must sign in.