How did the Ukrainian Euro-Union serve the awakening of the Southeast? 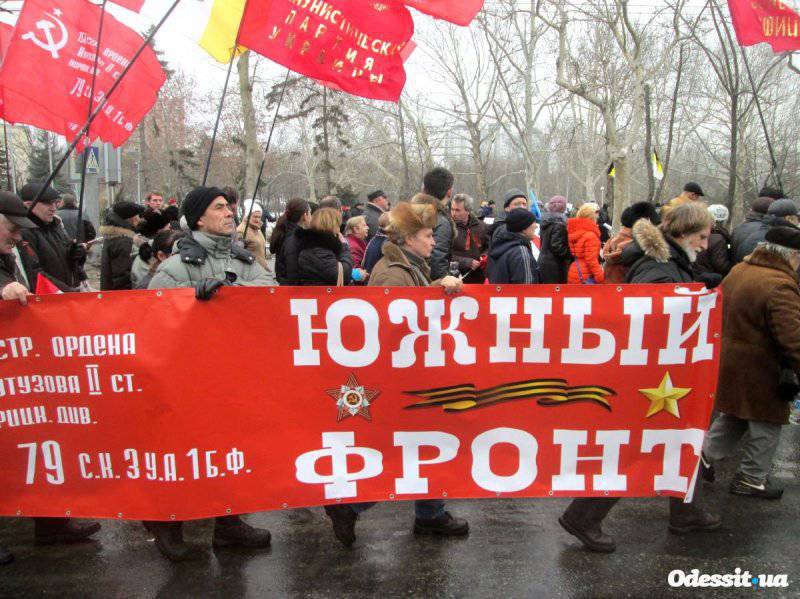 More than two months have passed since the beginning of the Ukrainian Euromaidan “revolution”. During the endless stays on Independence and periodic skirmishes with the police in the center of Kiev, the opposition was unable to achieve any significant success, and the “revolution” itself degenerated into a farce, which already bothered the residents of the capital.

After the first serious clashes of neo-Nazis with law enforcement officers, support for the opposition began to fall: fewer and fewer people came to the next popular assembly, and the expanded Neolithic camp in the center of Kiev, inhabited by incomprehensible characters, only frightened those who wanted to express their protest.

Attempts by the seizure of Western Ukrainian regional state administrations in central and south-eastern Ukraine led to a result that was unexpected for opponents of the current government: the hitherto passive South-East awakened. The Transcarpathian region, the residents of which, the Ruthenians, did not like the activity of the guests from the neighboring region, also started up.

The first thing was repulsed attempts to storm the regional administrations. Not only police officers, but also caring citizens began to protect the buildings. This was followed by the creation of voluntary national teams (DND) in the regions. Considering the television picture that is so important for the rebels, law enforcement agencies in some regions were engaged only in pushing away storming from administrative buildings, and members of teams and anti-fascist athletes were engaged in catching those who came in large numbers. In Nikolaev, the police were left without work.

Kharkov became the center of confrontation, where, with the support of the mayor and the governor, mobilized athletes from the Oplot club formed around the backbone of resistance. Simultaneously with the Kharkiv residents, the inhabitants of the Crimea awoke, and the rest of the regions were drawn up to them. Even the traditionally passive and apolitical Odessa woke up: more than 1200 of Odessa citizens enrolled in the DND, and security personnel joined the protection of public order along with the police.

At the moment, the people's guards function in all the regional centers of the south-east of Ukraine, and in Dnepropetrovsk the detachments of the militiamen are completely legalized.

Also, the Cossacks joined the provision of order in the cities, to which the last authorities of the 3 – 4 of the year, the Ukrainian authorities showed no interest.

The Supreme Council of Crimea responded to the ban of the Party of Regions and the Communist Party of Ukraine by banning Liberty. However, all prohibitions on the activities of political parties in Ukraine were protested by the prosecutor's office, and the relevant decisions were rescinded in court. However, the reaction of the regions is indicative.

A curious precedent happened in Odessa: state television decided to increase the share of programs in Russian, which caused a protest of nationally concerned residents of Odessa.

The creation of the Maidanov self-defense detachments, and then the National Guard, which decided to enter the All-Ukrainian level and swore allegiance not to the multinational Ukrainian people, but to the Ukrainian nation, provoked an even greater response from the Ukrainian Southeast.

So, February 1 in Kharkov on the initiative of the governor Mikhail Dobkin and the Kharkov regionals a public union "Ukrainian Front" was created. The constituent assembly was attended by the order of 6000 people, 20 regional delegations of the Party of Regions, representatives of the Communist Party of Ukraine and more than 50 of public organizations and associations. With its goal, Front set not only the unconditional release of seized administrative buildings, the cessation of protests on the Maidan, but also the reformatting of the Verkhovna Rada of Ukraine as the epicenter of the state crisis.

Kiev Communists created the Anti-Fascist Popular Front, whose cells will now open in the regional centers of Ukraine.

Crimea responded to the Maidan National Guard with the creation of a “Slavic anti-fascist front” (SAF), whose goal is to disrupt the neo-Nazi coup, stop violence on the streets and protect the rights of Russian-speaking citizens of Ukraine. February 8 to the "Slavic anti-fascist front" joined Odessa. In total, the SAF includes representatives of 30 community organizations. It is noteworthy that social activists from Transnistria, Moldova and Russia joined the ranks of the SAF: members of the Motherland-Eurasian Union public organization from Moldova, the Motherland political party of Russia, the Motherland-Congress of Russian Communities all-Russian public organization.

The people went to rallies

Also, Russian-speaking residents of Ukraine, who had hitherto immersed in their work and simple life, came to life. So, February 8 in Odessa took place many thousands of anti-fascist march. It is curious that the order of 70% of Odessa citizens is not supported either by the authorities or the opposition, but they are opposed to Ukrainian neo-Nazism and euromaidan. On the same day, an anti-fascist gathering took place in Kharkov, and an effigy of S. Bandera was burned on the anti-fascist march in Zaporozhye.

Paradoxically, but euromaidan benefited the Russian-speaking regions of Ukraine: the mass consciousness here finally came out of anabiosis. And if a substantial part of the actions of the Ukrainian opposition has a purely media character and is intended to create a television picture, then Southeast responds to these actions with completely symmetrical actions that are real.

It seems that according to the results of the Ukrainian “revolution”, its initiators will be among the losers. Thus, the leaders of the Avtomaydan have already left the territory of Ukraine, and the head of the seizure of the buildings of the ministries will fight the regime from London. Opened neo-Nazi underground, which the authorities still have to thoroughly deal with. In all its glory Ukrainian grantoedy proved themselves. The epoch of the Ukrainian multi-vector period has ended, and the authorities will now have to deal with real reforms, and not with their simulation.

But most importantly - there was an association of separate social organizations. And if they are not drawn as pawns into election campaigns, then they will have to become the force that will begin to promote the idea of ​​Eurasian integration in the awakening masses. Promote together not only in Ukraine, but also in Moldova, Transdniestria and Russia, and at the same time, if necessary, remind the authorities of the need to work. And it is already worth a lot.

Ctrl Enter
Noticed oshЫbku Highlight text and press. Ctrl + Enter
We are
Civil war in Ukraine: on the triggerRussian revolution: the debunking of myths and nontrivial view
Military Reviewin Yandex News
Military Reviewin Google News
105 comments
Information
Dear reader, to leave comments on the publication, you must sign in.