Egypt is waiting: will al-Sisi want to become president? 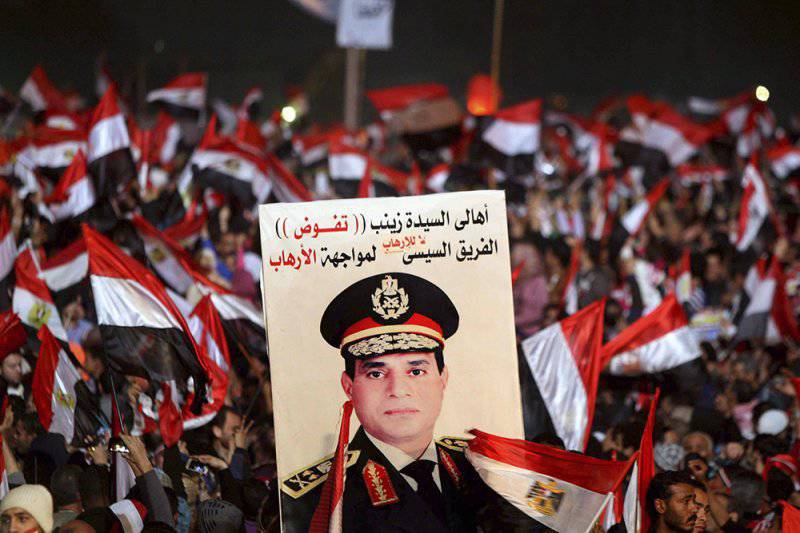 Egypt stood waiting for the next presidential election: Islamist Mohammed Mursi was untenable. He was overthrown by the Minister of Defense, Colonel-General Abdul Fatah al-Sisi, who, if he chooses, can easily assume the presidency. Everyone is waiting for al-Sisi to declare his intention to participate in the elections, or to abandon this idea. A young officer adored by the people has every chance of becoming either the next official head of Egypt, or the powerful “gray cardinal” - also the ruler of the country, but informal.

The revival of the glorious tradition

The Egyptian “revolution” ended in failure: in the summer of 2013, the military returned to power, although initially protests were held precisely with the aim of overthrowing their rule. The circle is closed. Now the country is again under the control of the Supreme Military Council, which has appointed regular elections for April of this year. Abdul Fatah al-Sisi is expected to take part in this election and win.

The military elite supports his candidacy. It seems that after a failed experiment with democratic elections, Egypt is returning to the old tradition of making presidents people directly involved in military service.

All the presidents of Egypt from 1953 to 2012 years were military. And only after the overthrow of Mubarak, a civilian became the president of Egypt, but with him the country was on the brink of an abyss. The military played democracy for a long time, tolerated, remained calm. But, in the end, they dared to stop the experiment of the "Muslim Brotherhood", and sent the first civilian president to the dump stories.

So far, the Acting President of Egypt is a lawyer Adley Mansur, not related to the armed forces. But he has no real power, and the transitional period will not last long. The Supreme Military Council decided that the revolutionary epic should end with a return to the old system, which had been working properly for half a century.

Al-Sisi - the supernova of the political sky

Mohammed Mursi may be replaced by al-Sisi. He, like the ousted Hosni Mubarak, studied at the Egyptian Military Academy. After studying, the young officer was sent to Saudi Arabia as an attache, then became the commander of the Northern zone and, finally, headed the military intelligence. After Mursi was elected president, Al-Sisi took over as minister of defense, receiving the rank of colonel general from a generous revolutionary ruler.

Such a personnel decision was considered wise by observers. Al-Sisi was considered an officer of the new generation, the favorite of Tahrir. However, as it turned out, political observers made a mistake: sensing something was wrong, al-Sisi renounced his patron, and then completely headed the coup against Mursi.

Under al-Sisi, the Supreme Military Council harshly suppressed the performances of the Muslim brothers, conducting several counter-terrorist operations on the Sinai Peninsula and entering troops in the suburbs of Cairo and Alexandria. At the same time, in the center of the capital, the military cleared out the tent camps of supporters of the Islamist president. Then the new authorities of the country dealt with the constitution and refused to introduce Sharia norms.

What is the risk of a young officer?

Al-Sisi is incredibly popular, it is compared with Eisenhower or de Gaulle and is perceived as the savior of Egypt. Many citizens are pleased that they returned to the secular state after the Muslim Brotherhood wanted to plunge Egypt into the darkness of the Middle Ages with their fatwas. But it seems that al-Sisi himself feels the burden of responsibility, and has not yet declared his intention to run for the presidency, although he is considered the most suitable candidate in Egypt.

Doubts of a young officer are justified: many Egyptian presidents did not end well, and the last two in the eyes of many Egyptians in general turned into outcasts. In addition, if al-Sisi does not take part in the elections, he will not lose anything, and will remain the "gray cardinal", the informal ruler of the country.

However, the repetition of the 2011 events of the year can hardly be expected. Although the Muslim Brotherhood organization still has thousands of members and has a monolithic “core”, it is unlikely that the new president will be overthrown as a result of the next putsch or uprising. The fact is that the Muslim Brotherhood has no support at the top, but, on the contrary, turned against themselves very rich and influential people interested in maintaining stability.

It was possible to overthrow Hosni Mubarak only due to the fact that the military and the oligarchs turned away from him, who took advantage of the people's anger for their own purposes and cleared the state apparatus for themselves. New political figures found support among the moderate opposition, which then entered into a temporary alliance with the Muslim Brotherhood.

But today, liberals, anarchists and left-wing parties, who do not want to discredit themselves in the eyes of voters, have turned away from the “brothers”. Fundamentalists are marginal, cooperation with them will be tantamount to political suicide. Because of their intransigence, they remained isolated. The “revolution” is over, the curtain has closed, but only one of the actors does not understand this, continuing to play its role in complete solitude.

But hardly fanatics can forgive the loss of power. The Muslim Brotherhood has been underground for over 90 for years, and has only recently become a legal party. “Has all the victims been in vain?” - this is the question asked by the leaders of extremists.

The military after the overthrow of Mursi tried to go with the militants to the world and even offered them places in the cabinet of ministers, but the “brothers” thwarted the negotiations and moved to active offensive actions. In response, the organization’s activities were banned, and some of its leaders had to be arrested.

However, the situation is changing very quickly. If now al-Sisi does not threaten anything, then in a year another uprising can flare up. According to the Institute of the Middle East, the Egyptian economy collapses, and no loans will save it. The next social explosion is a matter of time. "Muslim Brotherhood" will wait for him, being in the underground, and take advantage of it in order to take revenge.

Al-Sisi did not have time to announce his participation in the elections, and the opposition is already discussing possible ways to overthrow him. So, Imam Youssef, the head of the Alliance for the Rule of Law behind Mursi, said that al-Sisi will be overthrown more easily than Mubarak, since the new ruler came to power through a military coup. According to Youssef, the elections are a fiction, they are needed only to give al-Sisi legitimacy.

Thus, al-Sisi will lose nothing if he remains in the shadow. Then he will be able at any time to dismiss the next president. If al-Sisi himself is elected president, the stakes will increase: in the case of a social explosion, his rating will collapse, and the young officer will repeat the fate of his predecessors. Moreover, the reforms undertaken by al-Sisi may become unpopular with the people, even if they prove timely.

Al-Sisi wants to cooperate with Russia

Interestingly, al-Sisi focuses on Russia and expects to conclude several large deals with Russian enterprises. Soon, Russia will supply military equipment to Egypt, bought by Cairo with money received from the UAE and Saudi Arabia. More interestingly, the Gulf monarchies do not in the least hinder the signing of contracts, and even facilitate negotiations between Russia and Egypt.

Egypt wants to buy our air defense systems, fighters, helicopters and modern defense systems. Obviously, the technique needed to dominate the sky will not help at all in the fight against partisans in the mountains and suburbs of Cairo. It remains only to guess how this all of a sudden Egypt needed air defense.

In addition to military cooperation, Egypt is interested in the development of tourism and in increasing revenues from the export of natural gas. Russian citizens in the crisis year of 2013 literally saved the country's tourism industry from inevitable collapse: then 2,5 of a million Russians visited Egypt. And this figure may increase if Cairo so wishes.

As for gas, Russian companies can provide invaluable assistance in building the infrastructure needed for the extraction and transportation of hydrocarbons. In general, Cairo is obliged to Moscow for its energy independence: it was thanks to Soviet engineers that many ambitious infrastructure projects were implemented in the country.

Therefore, the orientation of al-Sisi to Russia is not accidental. This is not the desire to "spit in the face" of the West, who supported the "Muslim Brotherhood," but normal pragmatic cooperation.

To support a young officer or not? Definitely worth a return to Egypt. During the Egyptian crisis, Russia has not yet spoken. The USA, Western Europe and the Persian Gulf monarchies are at an impasse in the Egyptian issue, and now the whole world is waiting for the decisions of Moscow, which will be a turning point in the development of the situation.

Ctrl Enter
Noticed oshЫbku Highlight text and press. Ctrl + Enter
We are
Why overthrown Mursi, or the collapse of a failed jihadistLibyan military operation almost ended in failure
Military Reviewin Yandex News
Military Reviewin Google News
18 comments
Information
Dear reader, to leave comments on the publication, you must sign in.