We and the Olympic Truce 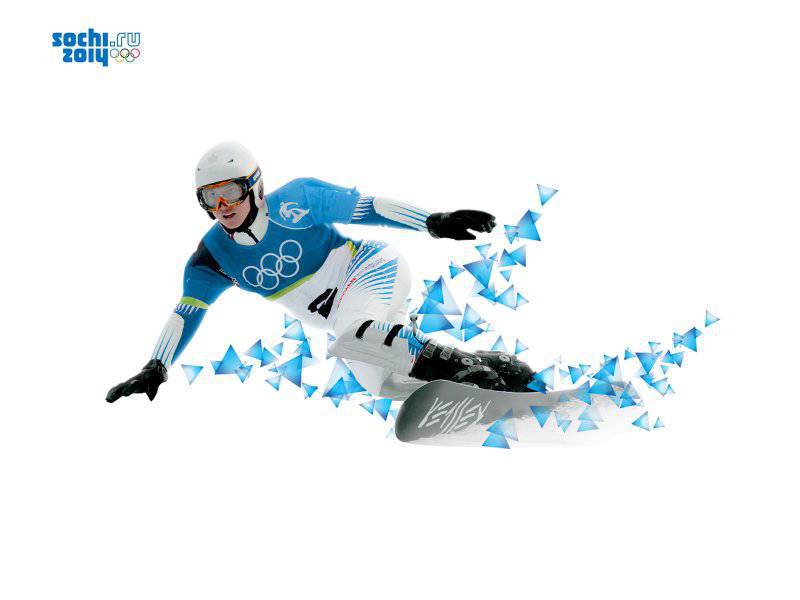 Well, that's all. It unofficially began yesterday with official competitions, and today, 7 February 2014, officially opens. Winter Olympics in Sochi. The full protocol title is the XXII Olympic Winter Games, to which neighboring Russia has been walking for a long time and the last 7 years have been diligently and urgently, systematically and with swearing, solemnly and revealingly, in short, prepared for everything. And she does not want anyone to overshadow this event. And for the international jackals, which is noticeable and in the rat wants the opposite, there is time until the Day of Defender of the Fatherland.

That is, before 23 in February, when these Games end, and, as one brisk informashkalenok wrote, “Putin will enter the operational field,” and Russia will begin to defend this Fatherland. And this, alas, must be done. And during the Olympics, in order not to prevent the athletes from competing, and their fans to support them. And after her, when it will be necessary to give out, as they say, to all the sisters by the earrings. So that it will not happen in the future. And fighting for the Olympic medals is only a small and, despite the passion, nerves and sports anger, a completely harmless part of the battle that Russia will have to fight.

Russia officially appealed to its friends and foes in the world with an appeal for the time of the Olympics to declare a truce. She was supported by Greece. And the UN General Assembly adopted the so-called resolution of the "Olympic Truce." Document continues historical the tradition is to suspend any hostilities during the Games, laid almost 3 thousand years ago. The truce is proposed to be announced a week before the Olympics and completed 7 days after the end of the Paralympic competition. Moreover, the document is significantly different from all previously adopted. Sochi 2014 Organizing Committee President Dmitry Chernyshenko proudly remarked: “In this resolution, we note the serious peacekeeping contribution that Russia has made in Sochi, conducting the international generations for Generation for Peace, Peace and Sports, which have already become traditional, which allow countries “Conflicting even countries that don’t communicate in everyday life, to meet, communicate with each other in life, using the universal language of sport.”

It is clear why all the ill-wishers of Russia, both inside and outside its borders, want to congeal the most important winter sports festival on the planet. Because it is being carried out by Vladimir Putin’s Russia, and the participation of the President of Russia immediately translates any act into a category of geopolitical measures that have not only a purely utilitarian purpose. For jackals, this is another, visible and sensitive, opportunity to bite and humiliate the enemy, to underline its inconsistency, to gloatly laugh and sweetly bruise the sweaty figure in your pocket.

For Russia and Putin personally, the Winter Olympics in Sochi really goes far beyond the scope of sports. This is a kind of symbol. Symbol of the revival of this country. The symbol is an indicator of the ability to conduct grandiose and prestigious events on a global scale at the highest level.

And this is pure politics. Even geopolitics. So, to humiliate Russia at the Olympics is also to take revenge on Putin for his geopolitical successes in resolving the conflict in Syria and “outbidding” Ukraine from the EU at the end of 2013. Russia has long spoken about its claims, if not for the role of the world superpower at the level of the USSR during the Cold War and the bipolar world, then in any case, the regional leader who is busy gathering around the “Soviet” lands around her in his orbit. And at the end of last year, she demonstrated that she is ready for such a role and plays it well. On these attempts and beat today. And they will beat tomorrow.

There is a huge moral aspect in the successful conduct of the Games in Sochi and a promise to all Russians. The fact that their country is successfully being revived and is ready not only to defend or to defend in some way, sprinkling ashes on their heads, but also to offer the world new magnificent peaceful humanitarian projects, and not just hydrocarbons from barbarically exhausted underground natural storerooms.

In addition, during the ideas of the Olympiad and its preparation for it, Putin once again demonstrated that he is a pragmatic politician who in vain reproaches with the waste of "money of all Russians that could be spent on social programs", their "burying" and " deribane. Yes, that's right: trillion-ruble investments in the Olympic infrastructure seem excessive and wasteful. But it seems so only at first glance.

Russian propagandists and interpreters somehow missed the moment when it was necessary to explain in more detail and thoroughly the main idea of ​​the “Kremlin-Olympic dreamers” headed by Putin. The idea of ​​turning the region around Sochi into a huge modern infrastructurally prepared resort for the northern country, which is Russia. So that it would not be necessary for Russians to rest with comfort to rush abroad and deliver their "hard-earned" rubles, euros and dollars to all kinds of Turkey and Egypt, Goa and Courchevels.

Russian media started talking about this only when Putin himself told about it in detail at one of the press conferences. And before that they were silent. And, in principle, it is their business - disassembly about who and what should speak to whom first in rank and table of ranks. But in any way it does not change the essence. If after the Olympics-2014 in the south of Russia remains superovaya and modern infrastructure, it will be a never-ending success. For all Russians in the first place.

And, of course, that is why they tried to bite the builders of this very infrastructure, emphasizing the shortcomings, the usual Russian blasphemy during construction, theft and squandering, where alluding, and where and bluntly, that the output will be zero. Clearly, the Ukrainian "Chessni ZMI" sitting on the grant suck of the organizers of this harassment, loyally and meekly joined in this vile slandering campaign. And they began to tell and show photos of toilet cabins with two toilets nearby, missing door handles, stolen or not installed sewer manholes, cracked new walls, etc., etc. And this, moreover, for example, by the name of the President of the Sochi Organizing Committee -2014 (Chernyshenko) it would be possible to understand where the ancestors of this gentleman come from. And be proud that "our man" and there "taxis." But how can this be noticed if they do not pay for it ...

And the “euromaidan” in Kiev, which launched metastases in the regions, is also part of the revenge of Russia and Putin. Ukraine, its people in these merrymakings of the powerful, were simply made a bargaining chip, a geopolitical cannon fodder on the principle “Europe didn't get, so don't you get to anyone.” And you have to be a complete fool, “evromaydaunom” or unscrupulous politician, eager to catch the goldfish of personal dividends in this muddy water, so as not to understand ...

And the “euromaidan” in Kiev, which launched metastases in the regions, is also part of the revenge of Russia and Putin. Ukraine, its people in these merrymakings of the powerful, were simply made a bargaining chip, a geopolitical cannon fodder on the principle “Europe didn't get, so don't you get to anyone”

And how, probably, she will beat the shaft of a yellow-blue or red-black flag and float soft seats with a trident to his wife, an athlete, one of the people's deputies, “Svobodovets”, because she, having arrived in Sochi as part of the Ukrainian Olympic team, dared praise the organization of games and life offered to athletes. How so?! And also a Ukrainian, a patriot, at least the wife of a Smerekov primate-patriot ...

But in early March, when the Paralympic Games in Sochi will end, the situation should change. And affect, including the Ukrainian hand. How? And here, in my opinion, one of the “anti-Maidan singers” people's deputy- “regional” Oleg Tsarev wrote quite correctly on this subject: “... The mood in the Kiev politics is quite alarming. Two American ships entered the Black Sea - the USS Ramage missile destroyer and the sixth flagship fleet USA Mount Whitney. On their sides more than 600 American "fur seals"! These ships are heading to the shores of Ukraine. In addition, the US military is already in Lviv. The landing of soldiers began there, although the military exercises of Ukraine with NATO are planned already in March. A substantial contingent of the military is expected - up to 1000 people in full gear and full armament. And then the appeal of the US State Department to the citizens of America arrived. It warms up an already difficult situation. We are in alarm, we are afraid of the next provocations. After all, right now there are chances that if this week goes smoothly - without the next effects of the revolution, without terrorist attacks - then in general the situation will finally normalize.

People are extremely tired of riots, sensations, shocks. They want peace, peace and security to their families. I am sure that after the Olympics Russia will take a more decisive position in relation to the events in Ukraine. There lives the largest Ukrainian diaspora, which worries about its historic homeland. The opinion of this diaspora does not coincide with the opinion of Ukrainians living, say, in Canada. On the other hand, there are up to 9 million Russian people living in Ukraine. Nobody will leave them in trouble if hostilities begin here. The existing regime in any country can be broken down in three ways. The first is if its leader surrenders, as we saw in the example of color revolutions. The second is if power structures turn out to be weak. And the third - if external expansion begins. But our president will not surrender, and the security forces will defend him to the end. There will also be no invasion, as the sky of Ukraine is covered by Russia. And this is the biggest help we need from the fraternal Russian people. ”

Yes, quite rightly: if Russia helps and will not allow the "zealots of Ukrainian democracy" to establish an "unmanned zone" over Ukraine and bomb it to hell for the sake of "the triumph of universal human values," this will be help. Brotherly. And no less important than the billions of dollars and the gas price discount, with which Russia has already supported the dirty-looking trousers of the Ukrainian statehood falling down in the performance of the “anti-people regime of Yanukovych” and the opposition, which has been torn to replace it with a “trough” ...

A Russian illustrator Andrei Tarusov on the eve of the Olympics drew a sports calendar for 2014 year. According to the website Adme.ru, there are no Olympic symbols in it, which still have time to get bored, but there are well-drawn pin-up girls in the assortment, and every month they accompany fervent rhymes about various sports. Olympic views, in which I would like to wish victories to Ukrainian sportsmen. Because, as you understand, for me personally, as for a fan, friendship, friendship, fraternity, fraternity, and medals - apart! “If you really are proud of your country, be a citizen, get up on a snowboard! And take medals home, to Ukraine "- this is the slogan of the current moment ...