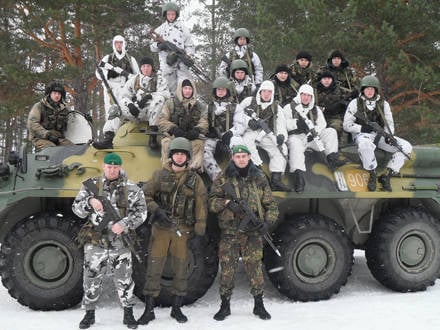 The fact that the military units and formations of the internal troops of the Ministry of Internal Affairs of Russia, which serve to protect nuclear hazardous facilities, there are special-purpose units, even in the troops of the law and order few people know.


For all the others, this is not a secret behind seven seals, but it’s still a little-known fact. This is understandable: the features of the service in the units for the protection of the VGO are largely classified, and the specifics of the tasks being solved by the special forces that are part of them are even more so.

With journalists, these people generally prefer not to communicate, making an exception only in rare cases ...

The special platoon commander, Senior Lieutenant Viktor Rykov, at the command of the regiment guarding the Leningrad NPP, the opinion is unequivocal: “a born special commandant, selflessly in love with his business,” “he has something to learn from other similar companies and platoons”.

Alas, on the eve of the arrival of journalists to the military unit, Viktor Sergeyevich departed for a scheduled business trip, so it wasn’t possible to personally meet. But the deputy regimental commander, Lieutenant Colonel Andrei Pasternak, smiled encouragingly:

- Do not worry, talk to his subordinates and deputy. Senior Sergeant Roman Senchukov is no less a fanatical campaigner and “punched” in the special forces just like his platoon commander. And all the tactical developments of the special platoon are the fruit of their joint work.

... In the barracks, where there was a separate platoon of special purpose, the excitement and business bustle reigned: the personnel had just returned from the training reconnaissance. The senior sergeant of contract service, Roman Senchukov, who remained behind the commander, was not very tall for about thirty years in a famously twisted green beret. to behave in this or that situation.

- And why are you surprised? So it is accepted in special divisions: prior to the decision being made by the commander, everyone has the right to vote, he explained with pleasure to the castle platoon when our conversation began. - I remember that even in the reconnaissance company of the Lebyazhievsky operational brigade, where I began the service, the commanders explained to each of us in a popular way: the reconnaissance and commandos are not an appendage to the bullet-proof vest and the machine gun, but a thinking combat unit. An excellent physical form, the ability to shoot straight, to masterfully master the techniques of hand-to-hand combat - all this is certainly necessary. But if you do not know how to think, you have no place in the special division. Here by this principle we select the guys in the platoon. The main thing is to be able to think, since our task is to prevent sabotage on the protected object at the stage of their preparation. To this end, we are constantly conducting reconnaissance and search activities on the ground adjacent to nuclear power plants. And often we come back with a “catch” - we will regularly stop the violators of the forbidden zone. 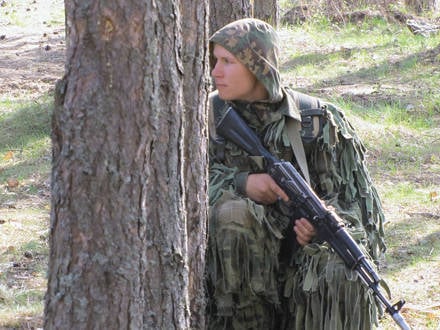 For example, fishermen or poachers often swim into a closed water area from the Gulf of Finland. It happens that migrants from the near abroad try to get into the city where the station personnel live. How do you get here? On the track there are police and military checkpoints where everyone is thoroughly checked. Trains and electric trains are also under control. From the bay, approaches are covered by a separate division of patrol boats of our regiment. There remains the only vulnerable path - inconspicuous forest paths. It is here that we catch the violators, transfer them to employees of the internal affairs bodies, and in special cases - the Federal Security Service.

Not long ago, our search team came across a suspicious man in a forest near a nuclear power plant. Seeing the military, he rushed to run. Fighters easily overtook him, detained, transferred to the police. It turned out that the citizen had illegally crossed the border of the Russian Federation and was wanted, because during a short time his illegal voyage had managed to break the law several times.

Another interesting situation happened a month earlier. The reconnaissance group of our platoon next to the station's spillway noticed a young guy with a gym bag. On the question of what he was doing here, the unknown explained that last night he celebrated a friend’s birthday here with the company, and lost a cell phone and a purse with documents on a drunken shop. He told truthfully, but it was clear that the stranger was clearly not a hangover. In addition, we knew for sure that there had been no company there the night before: during all this time this territory was under the secret observation of our groups. In short, we detained him, handed him where it should be. And then it turned out that they were colleagues from the security service of the facility and thus decided to check our vigilance. And they were satisfied ...

Continuing the conversation, we stopped near a bizarre form of a structure of reinforcing rods and thick wire, from which two commandos diligently cleaned the stuck earth and grass.

“This is a scout of a scout,” explained Senior Sergeant Senchukov. “By the way, we found instructions for its manufacture and use in the intelligence manuals issued back in 1949. Imagine: a reconnaissance team is given the task of equipping a covert observation position in a certain square. Then this frame is taken, lined with turf, and a fighter is placed inside. From the outside, everything looks like an ordinary inconspicuous tubercle, which does not arouse the slightest suspicion. How many times during exercises and training sessions, the search groups of our own regiment passed by such “bumps”, almost stepping on them. And it never occurred to anyone that our observer was sitting inside her. Do not believe? So we have a video confirmation: at last year’s exercises, the regiment’s units combed the forest, passed by our “bumps”, disguised at that time under an anthill. After that, our reconnaissance fighter quietly got out of his shelter and "destroyed" the entire search group that hunted him. And all this was secretly filmed on a video camera by another observer, who hid nearby under the second "hillock". 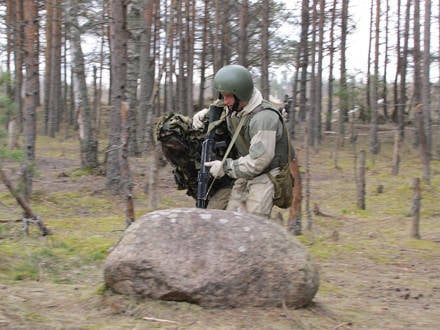 We use these hidden shelters not only when we check the vigilance of the search groups of our unit. Not so long ago, on antiterrorist exercises, the situation was as close to real as possible: several conventional terrorists penetrated the target for sabotage. Initially, neither we nor the military personnel of other units of the regiment knew either the plans or the number of “saboteurs”, which, under the terms of the exercises, could not be neutralized at the approaches to the NPP. "Terrorists" began to act after the penetration of the protected area, and we had a minimum of time for their detection and destruction.

Then it was necessary to collect in a fire order the “council of elders” of the most experienced warrant officers and contract servicemen, to organize brainstorming - to put oneself in the place of the enemy, to calculate the most convenient ways of his approach to the station’s vital facilities. And there already set ambush.

I will not disclose all the details of that operation, let me just say that our assumptions turned out to be true: those who portrayed the saboteurs moved exactly the way we considered as the most likely. True, they themselves helped them in this: when the blocking groups began to surround the newcomers, we left a gap in our battle formations, and the “saboteurs” rushed there. Well, there they were already waiting for the special forces ...

Specialists from the specialists

Often, among people unfamiliar with the specifics of the service of the units for the protection of the VGO and their special forces units, there is a perception that these military personnel are inferior in terms of combat training to colleagues from special forces. However, the facts suggest otherwise.

For example, at the annual competitions of special-purpose units of internal troops that were held in Ufa, teams from the units for the protection of important state facilities at each of the stages of the competitions kept steadily in the top five. And one of the best in the overall standings was a platoon of the Sarov division of the Volga regional command of the Russian Interior Ministry troops. It is also noteworthy that for the most part it consisted of conscripts who, at that time, had served no more than six months. 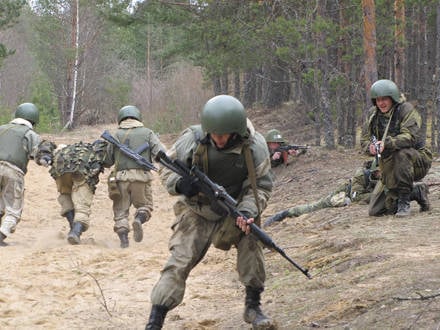 And yet, according to the “specialists from specialists” themselves, in such units only contract service professionals should serve. After all, the study of the features adjacent to the object area takes months. In addition, they are constantly changing, affecting the organization of the NPP security system: sometimes a gap appears in the fence, then the approaches to the perimeter will become overgrown with bushes ... On top of that, the military personnel of the special forces unit must be ready to fully perform the duties of controllers at the checkpoint, as in certain In the circumstances, the regiment regularly reinforces checkpoints for special forces. Not to mention the fact that from time to time several people from the platoon are sent as part of special task forces to the restless North Caucasus in order to acquire combat experience there, which, as we know, cannot be replaced by anything.

So the question of recruiting units with qualified personnel in the platoon of special forces is quite acute. Fortunately, there has recently been a positive trend: after a significant increase in the monetary allowance for servicemen and housing for people in uniform, the number of those who decide to link their fate with the forces of law has increased. Accordingly, the command of the unit has a wide choice of special forces candidates, although the contract soldier’s salary in a separate platoon of special forces is not much more than in other units of the regiment, and the service is much more stressful and restless.

But it means that something attracts young people here besides money ...