How to fill the Russian industry with professional staff?

February 6 2014
114
The state of the military-industrial complex today can hardly be called optimal. And the main reason is that the defense as a life-giving moisture needs qualified personnel. This phrase "qualified personnel" has already managed to turn into a real stamp, but the essence of the matter does not change from this state of affairs. The shortage of professionals in the industrial (and not only, incidentally, in the defense) sphere is already turning into a real threat to the competitiveness of both the Russian economy and the country as a whole. The chain is very simple: if today these or other industrial enterprises lose the opportunity to build themselves up with professional engineering and working links on a qualitative basis, then tomorrow these enterprises will be on the outskirts of the economy, and their production niche in Russia will remain empty, which in turn will lead to an obvious dependence on foreign manufacturers (in some industries already leads).


The fact that such a lost industry, and that there is a frank dependence on the production potentials of foreign countries, today can be judged by the numerous examples of the so-called "Young Europeans". The countries that at one time decided that it was financially not profitable to have large-scale productions themselves, that “good uncles” from Berlin, Paris and other places would deliver everything on a platter for new admirers of “democracy”, were seriously mistaken. Virtually the whole of Eastern Europe (with rare exceptions) today sits firmly on loans from "partners", rolling up its production facilities (from agricultural to machine-building) and gradually begins to understand what kind of sticky slush it has run into ...

Today, from such a sticky and fetid slurry, Russia is not insured either. The only difference is that our country no longer believes in “democratic” tales of credit welfare and that foreign goods (from a needle to a spaceship) are more profitable and certainly better. We do not believe that this is a big step forward, but only in order to take other steps in this direction, only the understanding of the need to rely on ourselves is not enough. Looking for real action. 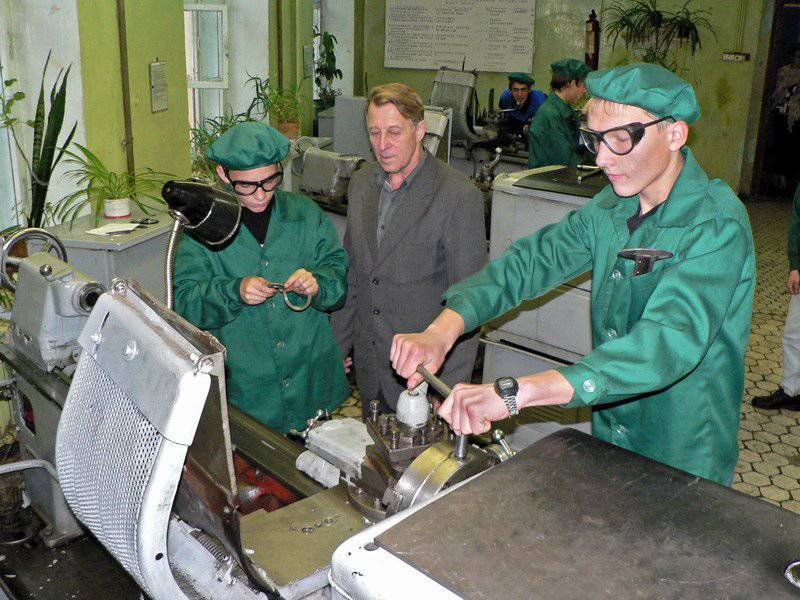 So what actions today to apply to the Russian industry (and the defense industry in particular) began to emerge from the prolonged stagnant (or rather regressive) funnel? A considerable number of people (and specialists and, let's say, ordinary people) are ready to answer this question in the following way: naturally, wage increases in the real sector.

Material stimulation is more than a serious trump card. When the labor remuneration system is built in such a way that there will not be an 20-30-fold pit between the income of the head of the company and the income of his average employee; when the principle of financial justice (no matter how utopian it may sound) will be implemented not only on paper, but in practice, then, it must be assumed, and the attractiveness of the industrial sector will seriously increase.

But is the only way to raise wages for workers and engineers? In fact, not everything is so simple. The fact is that on a whole number of industrial productions the management itself is not against paying skilled employees very good salaries by the average Russian standard. Yes, but the trouble is that skilled workers who understand engineers in their field often cannot be found with fire. Who is guilty? Well, here you can bend your fingers, list specific names, but lately we in Russia seem to be doing nothing but searching for the guilty, losing time. It’s time to abstract a little from this search and try to find real ways out of the current personnel crisis. If - a dead end, it will be unjustifiable and a little back, if it ultimately helps to find a way out.

One of the ways out is a full return to cooperation between educational institutions and industrial enterprises. If an industrialist needs some kind of professional workers or engineering personnel, then it is in his interest to raise these personnel in educational institutions, which is called “manual”. That is, to give an opportunity to undergo practical training at the plant equipment, and not on paper (as it is implemented in most cases today), to finance the most important areas of vocational training, to secure jobs for the most successful students, stimulating them, including . This will increase the prestige not only of the enterprise itself, but also of the educational institution with which such an enterprise cooperates. Yes - there is such cooperation, but so far, rather, it looks episodic, rather than systemic.

In the end, think about the possible system of distribution of graduates, because today only about 10% of young people who receive university diplomas work in Russia in the specialty (for graduates of secondary vocational schools, the percentage is even lower). Such percentages suggest that the state actually finances the training of those who are unlikely to make a contribution to the Russian economy in the near future (including the unemployed).

The problem is that most industrial enterprises are in private hands, and their owners, to put it mildly, are not always interested in the concerns of the state. Well, here it is - if we want some positive in Russian industry (and defense too) to be, then we need these same industrialists, let's say, to be interested at the state level. Options, by the way, is not so little. In the end, the business leaders themselves frankly admit that they literally dream of well-trained young people for professional work (both on machine tools and with drawing and design programs). So, here the interests of private capital and the state, at least, do not contradict each other. And this already means that it is time to use the opportunity to dock with the interests of the state and private owners now.

Stimulation of active and large-scale (rather than individual) training of professional personnel, including on the basis of private capital, can be carried out through tax incentives, through a system of budgetary investments. For those who are particularly hard-nosed, and such ones will certainly be found, the state could well turn on the machine of “explanatory” work. Like, if you need professional personnel - help them prepare, stimulate. As they say, if you don’t take it, turn off the gas! Someone will say that this is unjustified pressure on a private trader, but why is it unjustified ... Today, without reasonable government intervention in the business, there is no way - the crisis has confirmed this thesis. Even in the “liberal market” of the United States, business is often not at all ambiguous making it clear that “in war as in war,” which means you need to cooperate more actively. The economic swirl of 2008-2010 has clearly blurred the notion of “full liberalization of the economy.”

Ctrl Enter
Noticed oshЫbku Highlight text and press. Ctrl + Enter
We are
Deputy Prime Minister of the Russian Federation: In the 1990 and 2000 years the potential of the military-industrial complex was robbedUralvagonzavod today is not just a large machine-building plant, but a research and production corporation
Military Reviewin Yandex News
Military Reviewin Google News
114 comments
Information
Dear reader, to leave comments on the publication, you must sign in.