Alexander Matrosov. Man for the feat

February 5 2014
64
Exactly 90 years ago, February 5 1924, Alexander Matrosov was born - a man who entered the Russian forever history. In Soviet times, the name was familiar to every student. Name Matrosov became a household name. 27 February 1943 of the year during the battle near the village of Chernushki on the territory of the Pskov region Red Army soldier Alexander Matrosov from the 91-th separate Siberian volunteer brigade named after Stalin committed the feat, coupled with heroic self-sacrifice. According to the official version, he covered with his breast the embrasure of the German bunker, rescuing his comrades from the fire and contributing to the combat mission assigned to the unit.


Alexander Matrosov was born in Yekaterinoslav (today Dnepropetrovsk, Ukraine). Russian, was a member of the Komsomol. Sailors lost their parents quite early, after which, over the course of 5 years, he was brought up in the Ivanovo Regime Orphanage in the Ulyanovsk Region. In 1939, he was sent to the car repair plant located in Kuibyshev (today Samara), from where he for some reason had fled. In October of 1940, he was convicted under the 3 article of the RSFSR Criminal Code for violating the passport regime by sentencing the people's court of 192 to the district of the Frunzensky district of Saratov. Repeated violation of the regime provided for imprisonment for up to 2 years. After this judgment, Matrosov was serving a term in the Ufa children's labor colony. (In 1967, this sentence was canceled by the judicial board in criminal cases.) After the start of World War II, the Sailors made several written requests to be sent to the front.

As a result, his wish came true. In September, 1942, he was drafted into the ranks of the Red Army and sent to attend training at the Krasnokholmsky Infantry School. However, most of the cadets did not complete the training and were transferred to the Kalininsky front.

Alexander Matrosov was in the army since November 1942. Sailors served in the 2 Infantry Battalion, which was part of the 91-th separate Siberian Volunteer Brigade, named after Stalin (later the 254-th Guards Rifle Regiment of the 56-th Guards Rifle Division). For a while, this connection was listed in the reserve of the front, but then it was redeployed near Pskov in the area of ​​the Great Lomovaty Bor. The brigade was forced to engage the Germans directly from the march. 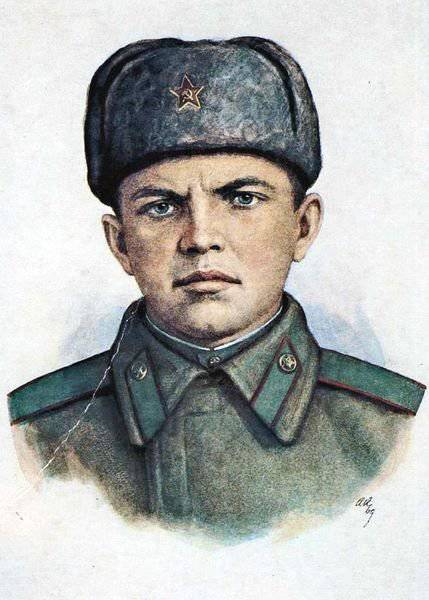 27 February 1943, the 2 battalion of the brigade receives the combat mission of attacking a German defense stronghold in the area of ​​the village of Pleten, which is located west of Chernushka. As soon as the Soviet soldiers passed through the forest and appeared at the edge of the forest, they fell under very strong machine-gun fire from the Germans. The approaches to the village were securely covered with three machine gun bunkers. One of them managed to suppress by joint efforts of armored workers and a group of machine gunners, the second bunker was also destroyed by a group of armored men, but the machine gun from the third bunker did not stop pouring the ravine in front of the village with fire, keeping the infantry units advancing. Attempts to silence the firing point were not successful. Then, in the direction of the German bunker, the Red Army man Alexander Matrosov crawled in and managed to get close to the bunker’s embrasure itself and threw two grenades at it. For some time the German machine gun was silent. But as soon as the soldiers went on the attack, the machine gunner opened fire again from the bunker. Seeing this, Alexander Matrosov rose and jerked toward the firing point, covering the embrasure of the bunker with his body. As a result, at the cost of his own life, he contributed to the combat mission of the entire unit.

19 June 1943 of the year for the accomplishment of this feat Matrosov Alexander Matveyevich was awarded the title Hero of the Soviet Union (posthumously). And already September of the same year 8 issued a decree number 269 on assigning the 254 Guards Rifle Regiment (the 91-I separate Siberian Volunteer Brigade received the name after the re-formation) named after Alexander Matrosov. At the same time, an ordinary guard, Alexander Matrosov, became the first Soviet soldier, whose name was forever on the lists of the military unit.

The feat that Alexander Matrosov accomplished very quickly became known to almost the entire country and ceased to belong to his hero. From the very beginning, the history of the combat episode was treated freely. For example, the feat was moved to 4 a day ago - on February 23 1943 of the year (on the 25 anniversary of the formation of the Red Army). For what purposes did you need to adjust the date of death of the hero? The question is rhetorical. It is absolutely clear that on the eve of such a date it was decided to use the death of a Komsomol from a unit named after Stalin for propaganda purposes. 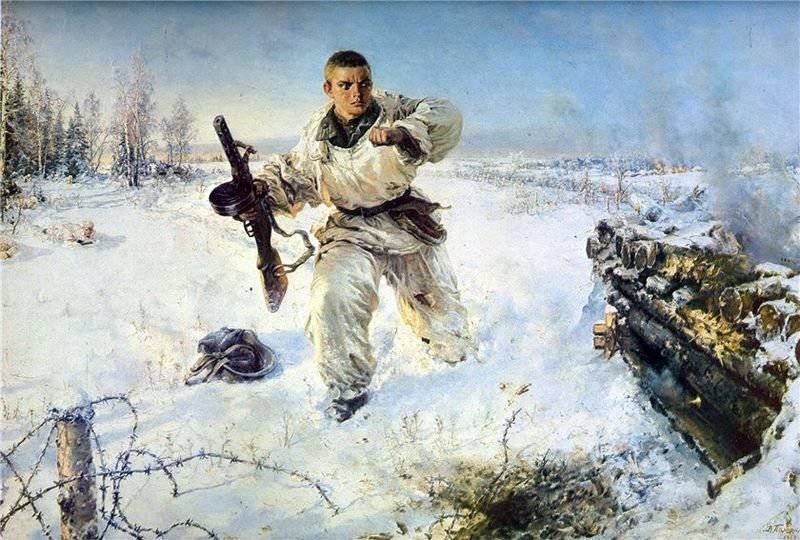 Elements of untruth became the price that had to be paid for the appearance of the myth. At the same time, the “myth” in this particular case is by no means a derogatory assessment: what Alexander Matrosov accomplished in battle was a truly heroic act. And not the only one of its kind. In addition to Matrosov, another 300 Soviet soldiers and officers repeated a similar feat. In addition, the Sailors was not the first of them. Military documents confirm the facts of such self-sacrifice, which are among the most difficult 1941 battles of the year. However, the circumstances and time were such that it was the feat of Matrosov that formed the basis for the creation of a very strong heroic myth, for the creation of which it took a little lie, which was then considered quite an acceptable price for the birth of a legend.

However, as practice shows, no lie remains unanswered. Perhaps, as a delayed reaction to it, various “exposing” versions of this feat appeared in the perestroika years. The authors of these devastating hypotheses eagerly began to analyze the rather scanty documentary evidence of the hero’s death, searching for inconsistencies, examining the archives in search of the soldier’s hero’s “true” biography, questioning the very “effectiveness” of such a method of fighting the enemy’s bunkers.

The reasons for this approach can be found in the trends and moods that were characteristic of the end of the 20th century, when everything that had to do with Soviet history began to diligently unmask and dethrone. This was another explanation. Any significant events of our history that carry some deep creative meaning, any act that has a deep moral content, cause and, most likely, will cause a very complex attitude among people - first of all from those of us unable to go on such an act, who does not see in him any special meaning. Only the person who sacrifices himself can fully understand the meaning of self-sacrifice (rationality, efficiency, logic, expediency). 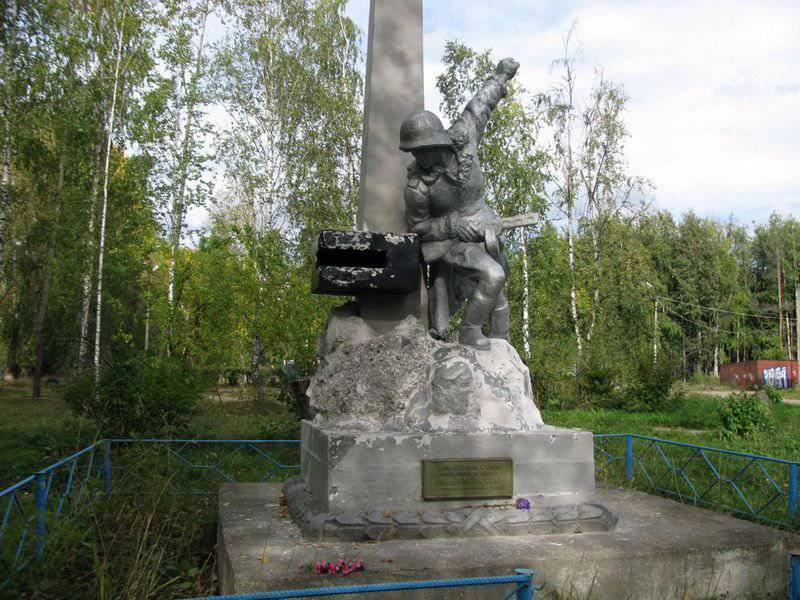 What did we inherit from Alexander Matrosov: reality or is it still a myth? The answer to this question is actually quite simple. No matter how unreliable the proofs of the death and life of Matrosov, corrected by official Soviet propaganda, seem to us today, one thing remains unchanged and unshakable: the fact of the death of a soldier in battle. Death, which provided the opportunity to live by others. At the same time, under the "other" can be understood not only the fellow soldiers of Alexander Matrosov, but also you and me. This is the reality, faced with which, all claims to the authenticity of the history of this feat lose their importance.

Any feat eventually creates a myth that provides him with immortality. And the process of debunking the exploits is deeply immoral and inhuman, not even in relation to the memory of the dead, but in relation to the memory of the living. Time today creates its heroes. And if all modern heroes turn out to be such that in order to convince the audience of their heroicity, the efforts of PR geniuses or enormous media resources are needed - well, well, that means this is such a time. Against this background, the feat accomplished by the guard, ordinary Alexander Matrosov, stands out for its integrity, simplicity and truthfulness. The propaganda manipulations of the Soviet era and the post-Soviet hysteria with “sober assessments of the past” could not harm the blessed memory of this feat. The soldier has done his duty to the end, so we remember him.