General return to their homeland? The Poles took to the dismantling of the monument to the Soviet commander 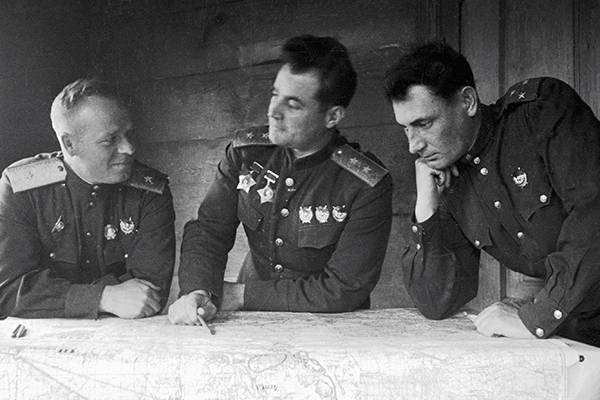 The Council of the Polish city of Penenzhno decided to dismantle the monument to General Ivan Danilovich Chernyakhovsky, who died during the liberation of the city 69 years ago.


A sculpture with a bas-relief was erected on the outskirts of the city in 70-s. The Polish side proposes to transfer it to Russia or transfer it to a nearby military cemetery.

Consensus on this issue the members of the Council of the city of Penenzhno managed to reach with the third attempt. The proposal to dismantle the monument for two years was put to the vote three times, and only now it was supported by the majority - seven of the thirteen council members. Parsing the monument is not easy and requires money. However, thanks to publications in the local press, the city council received proposals from sponsors who are ready to provide funding for the project, which - also free of charge - will be carried out in one of the architectural bureaus. Such unanimity is explained by the fact that twice Hero of the Soviet Union, Ivan Danilovich Chernyakhovsky in Poland, is considered not the liberator, but the commander of the operation to liquidate local units of the Home Army.

According to local historians, "the general played a negative role with regard to Poland and the Poles." The further fate of the monument depends on Russia - in accordance with the bilateral agreement of 1994, the Commissioner for the Preservation of the Memory of Fight and Martyrdom, authorized to settle such issues, should seek the consent of the Russian side. According to the Polish edition of Gazeta Wyborcza, Council Secretary Andrzej Kunert even before the adoption of the relevant decision signaled to the city authorities that their initiative would be supported. “During consultations with the Russian side, we will offer them to take away a bust or any other element of the monument if they have a desire,” the newspaper quotes him. Meanwhile, the Kaliningrad media report that the region is ready to take patronage over the monument to Chernyakhovsky, who made an enormous contribution to the capture of Soviet troops in 1945, the fortress and the city of Königsberg. Governor Nikolai Tsukanov instructed the head of the regional international affairs agency to go to Poland to discuss the situation.

As told to "RG" great-granddaughter of General Chernyakhovsky Neonil Vedoshchenko, the family learned about the plans of the city authorities to dismantle the monument from the issue News. "We are afraid to talk about this Neonila Ivanovna - the daughter of the commander - this could be a real blow for her," - says Neonila Jr. The descendants of the general are waiting for news: how will the fate of the monument ultimately be decided, will the Russian side agree to dismantle it. However, the family of Ivan Danilovich Chernyakhovsky is not accustomed to holding the blow. According to the great-granddaughter, in the 90s the family did not find in the Museum of the Armed Forces most of the awards of the deceased general, which were once handed over by his widow Anastasia Grigoryevna. 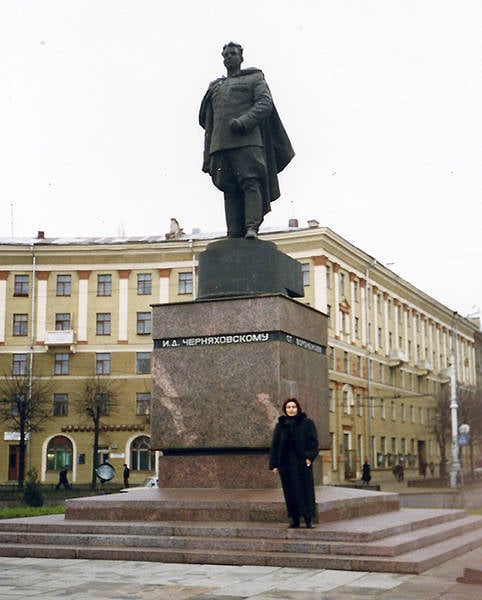 Granddaughter of commander Anastasia at the monument, taken out from Vilnius to Voronezh. Photo: from the Chernyakhovsky family archive

Daughters of Ivan Danilovich Neonile reported that they were lost when the museum moved to 1965. Years later, another version was presented to his son Oleg: the awards, including the orders of Suvorov, Kutuzov, Bogdan Khmelnitsky, disappeared into the "dashing 90". When the great-granddaughter turned with a corresponding request, it turned out that the awards had been stolen from the museum at the end of the 50-s, and the criminal case, if it had been opened, had obviously not developed. At least, there is still no answer, where the awards of an outstanding commander, twice Hero of the Soviet Union, and whether anyone was responsible for their loss is unknown. As for the monument in Penenzhno, the family does not know how, with such an attitude of local people, it can remain in Poland, even in a military cemetery. Those close to the general would prefer that he be in Russia - in Kaliningrad or any other city liberated by troops under the command of Chernyakhovsky.

The news that Poland wants to get rid of the monument to the Soviet general arrived just in time - in two weeks the family will remember their father, grandfather and great-grandfather, because he died on February 18 1945 of the year. The daughter of the commander Neonila Ivanovna recalled in an interview with a RG correspondent: “At six in the morning, our housekeeper came into my room and turned off the radio. I immediately woke up, saw that she was crying, and realized that something had happened. My first the thought was that the misfortune happened to my mother. We were just waiting for her, she had to come from the front ... That something happened to my father did not even occur to me. He was in such alterations - a bullet pierced raincoats, an overcoat, a cap - but I’ve never even been injured. Later I left the room and saw that we had sitting representative of the Main Political Directorate. He said: "Get ready. At such a time, a plane will be waiting for you. You will fly to Vilnius. "How? Why? Why? Then it became clear that his father died, that Stalin ordered him buried in Lithuania." Chernyakhovsky’s youngest son Oleg Ivanovich explained: “When the father’s troops took Vilnius, he ordered not to use heavy weapons, no aerial bombs and other things. Vilnius was almost not destroyed - the troops took it with minimal losses for the city to save the capital of Lithuania. Apparently, therefore, Stalin decided that the father should stay with the fraternal Lithuanian people. "

The place for burial was inappropriate - the very center of the city, restaurants, shops, a place of festivities. At the end of 40, the commander’s widow turned to the Lithuanian government with the request that the ashes of Ivan Danilovich be allowed to be transported to Moscow. But this was only possible in 1991. Today, near the bust of Chernyakhovsky, the work of Soviet sculptor E.V. Vucheticha at the Novodevichy cemetery is a marble slab, which lists the city, the release of which commanded the general. And the monument, which stood in the center of Vilnius, was transported to Voronezh, a city liberated by the troops of the 60 Army under the command of Chernyakhovsky, solely thanks to the efforts of the Voronezh citizens themselves and the Russian military, who took the sculpture from Lithuania and, thus, saved the "bronze general" from melting .

Ctrl Enter
Noticed oshЫbku Highlight text and press. Ctrl + Enter
We are
Monument to General Chernyakhovsky to be dismantled in PolandPolish authorities Penenzhno turned to Warsaw with a proposal to dismantle the monument to General Chernyakhovsky
Military Reviewin Yandex News
Military Reviewin Google News
71 comment
Information
Dear reader, to leave comments on the publication, you must sign in.