Russia gives place among the most drunk to other states

February 4 2014
274
The chief psychiatrist-narcologist of the Ministry of Health (and there is such a regular unit in the Ministry of Health) Evgeny Brun announced that the situation with the use (abuse) of alcoholic beverages has significantly improved in Russia for the first time in recent years. The Ministry of Health, using a certain method, has been analyzing the level of alcohol consumption by Russians for many years (the records are kept according to the version of the World Health Organization methodology - citizens aged 15 years are considered). According to Evgeny Brun, in the 2013 year, the Russians drank alcoholic beverages by about 13% less than in the 2012 year. The indicator is really impressive. In turn, in the 2012 year, the Russians (again, at the age of 15 years) consumed only alcoholic beverages by 1-2% less than in the 2011 year. That is, in 2013, the progress is much more serious.


In 2011, the World Health Organization allocated to the Russian Federation 5 a line of not very positive world ranking - the rating of per capita alcohol consumption in the countries of the world. According to the WHO, in 2011, Russians averaged about 15,7 liters of alcohol on average (the equivalent of pure ethyl alcohol). At the end of the year 2013 (data from the Russian Ministry of Health), the average level of use was approximately 13,5 liters. The share of vodka for the first time in all history new Russia (since the collapse of the USSR) has dropped to less than 50%.

By the way, the Russian segment of the famous Wikipedia stubbornly continues to submit WHO 2011 data of the year, although the latest “adopted” edits are dated November of 2013. Whether, with efficiency in the project, not everything is in order, or a significant reduction in the level of consumption of alcoholic beverages in Russia somewhat does not fit in with the position of “Internet encyclopedists”. In general, “on Wikipedia”, Russia statistically averagely “fills the collar” for 15,76 liters per year (“per capita”), which is significantly different from the Ministry of Health data for the year 2013. 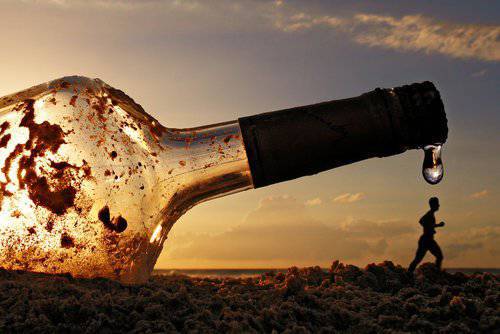 If we start from the 13,5 indicator of a liter of "pure alcohol", then this indicator immediately moves Russia from the top five to the second ten of the WHO rating, in particular to countries like Portugal, Austria and France (from 13 to 14) ). Should we be proud that our country “drinks” as much as, for example, Austria (on average per capita)? Well, there is nothing to be proud of here, frankly, especially, but the fact that Russia has left the unenviable top five, giving up its place to Romania (now occupies 5’s place in the rating with 15,5 l per capita) - can be considered really positive.

It is interesting that during the last three years, Moldova has not lost its position, essentially breaking away from the closest “pursuers” and settling in the first place of the “alcoholic” rating. In the period from 2010 to 2013, the average Moldovan citizen uses 17,8-18,3 a liter of pure ethyl alcohol per year.

Even more interesting is the situation in Sweden. As they say, who would have thought that in just two years the level of alcohol consumption in this Scandinavian country will grow so much that it will move from the fourth dozen of the rating to the second place! With very impressive prices for alcohol in Sweden, the number of recorded purchases increased by almost a third. It would seem that some mathematical error of the WHO or the Swedish Ministry of Healthcare was originally laid here, but in fact there is no mistake - everything is very prosaic. It turns out that just the trust of the Scandinavians, until recently, was such that only people from 20 years were included in the calculation formula. Why? The reason is that in Sweden it is from this age that the sale of alcoholic beverages is officially authorized. Like, if you are allowed to buy alcohol only from 20, then they drink in Sweden only from 20 ... Interesting logic, isn't it ...

Then they decided that such a calculation is a priori fraught with cunning and, as they say, they have counted everything. The main criterion for the recalculation was the sociological surveys that were conducted among young people aged from 15 to 19 years. These same polls showed that Swedish young people and girls not only drink alcohol before reaching the “legal” age, but also know how to get it, bypassing all Swedish restrictions. One of these “holes” is “gifts” in the form of a box of beer or a bottle of brandy when ordering, for example, a set of wine glasses or a beer mug. And we in Russia naively believed that the system of bypassing any government prohibitions was characteristic only for our country ... In general, Swedish sociology and statistics experts analyzed the collected data, and so much so that they themselves became very excited. It turned out that in Tre-Krunur they drink more Russians, Ukrainians, Finns, Hungarians ... Only the mentioned Moldovans are put to the bottle more Swedes. Are these data evil? You can take them as you please, but the fact remains: the number of deaths from cardiovascular diseases recorded by the Ministry of Health in Moldova is steadily increasing, and the number of similar deaths in Sweden, Hungary, the Czech Republic, Romania (the countries of the top five “alco-rating” is growing). The growth of the mentioned type of deaths in Russia slowed down following the results of 2013 of the year to a minimum for all the recent years - about 2% per year. In 2011, this figure was about 9% per year. If the decline in alcohol consumption continues, then physicians expect (for the first time in the last 25 years) a reduction in mortality from cardiovascular diseases (a significant contribution to which is exactly the use of alcohol) already following the results of the 2014 year.

Let us return to the indicators of alcohol consumption in Russia. Of course, every person has a reason to trust the data of the Russian Ministry of Health and specifically the data of Yevgeny Brun, so there is a reason not to trust them. But that's what's the matter. If we were told that the percentage of alcohol consumption in Russia had grown, few people would criticize the information - they say, of course, grew - we are the most drinking nation in the world, we all from the 1 class of the school until the last year of life do not get drunk , we, forgive, we thump in black ... And as soon as there is information about reducing alcohol consumption among Russians, there are also people who claim that Bryan, Skvortsova, or Putin (as without Putin) are "shameless lie. " Already, on the resources that have published data from the Ministry of Public Health, gentlemen have appeared, who “undoubtedly know more than any minister, doctor, sociologist”: they say, the authorities “bother” - they only began to drink more. And it turns out that one cannot object to such logic - the “writer” himself sobered up for dinner today, followed the “sober”, met yesterday’s drinking companion, and therefore, they drink more in Russia ... And everyone, you understand, must believe - he, so to speak, communicates first-hand ...

It is also clear where this logic comes from. In recent years, the media, scientific and pseudoscientific literature have published data on how Russia is "drinking itself". Such an information wave (or even war) led to the mental stereotype that only Russians themselves drink more Russians. People who get acquainted with other data immediately try to find a bunch of counter-arguments that, according to their personal conviction, need to be trusted more than those given by the World Health Organization and the Russian Ministry of Health. Hence the global stereotype of “drunk Russia forever”. Apparently, in this light, it’s more convenient for us to put up with you, it’s easier for us to impose some destructive positions, it’s easier for us to manage in the end. It is here that lies the main cunning, which does not allow many of us to perceive the positive data, as they say, with a cool head.

Of course, in our country there are still a whole bunch of problems associated with alcoholization of the population (adolescent beer alcoholism, veiled alcohol advertisements (through lifestyle, when - euphoria and accessibility at the forefront), the implementation of the so-called "fake" vodka through "uncontrollable" points sales, sale of alcohol to persons up to 18 years without presenting a passport, moonshine making "for mass sale"). But all problems are not immediately solved a priori. If we continue to work systematically in this direction (without such excesses as, for example, cutting down vineyards or vodka coupons), then the result will be more than successful. At least, I would like to hope for the continuation of the relevant system work.

PS This paper discusses the situation with the level of alcohol use. Problems with drug addiction, substance abuse and other "maniah" - in other materials.

Ctrl Enter
Noticed oshЫbku Highlight text and press. Ctrl + Enter
We are
Influenza in Russia. What threatens public health and why not panic?Situational analysis of the death of the MH17 flight (Malaysian Boeing 777), made on the basis of engineering analysis from 15.08.2014
Military Reviewin Yandex News
Military Reviewin Google News
274 comments
Information
Dear reader, to leave comments on the publication, you must sign in.