February 3 2014
36
It would be strange if there was no attention paid to raising the level of security on the streets of Russian cities, at train stations and at airports, educational and medical institutions. It would be strange if terrorist acts and other extremist attacks did not become lessons for society and the authorities. However, it is sometimes difficult to understand the logic of some, let’s say, generators of ideas seeking to “screw” in security issues also some kind of provocative screw.


It seems that screwing up of such a screw seems to be decided today by St. Petersburg lawmakers. We are talking about the birth of a very original initiative of a regional nature, according to which to protect law and order on the streets of the northern capital in addition to representatives of the Ministry of Internal Affairs there will be civilian patrols from among the youth with obligatory representation in them of people from the North Caucasus regions. After the December meeting of the St. Petersburg Legislative Assembly, the idea was supported by the governor of St. Petersburg, Georgy Poltavchenko. As a result, something like the directive that the publication publishes was born Fontanka.ru:

Committees on youth policy, science and higher education, law, order and security issues in cooperation with the Department of the Ministry of Internal Affairs to work out the creation of law enforcement units within the framework of public organizations with the obligatory inclusion of representatives of diasporas of the North Caucasus region of the Russian Federation. Develop regulations and instructions for their activities.

It is especially noted that the development of all the necessary provisions on this matter should be completed by mid-February, after which the "civilian patrols" that follow the order may appear in St. Petersburg. 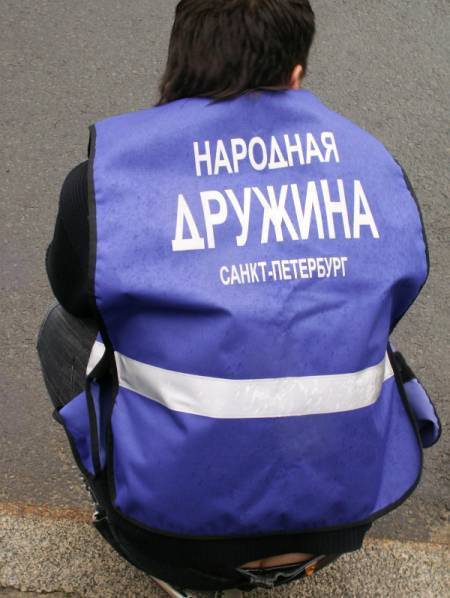 Well, on the one hand, the St. Petersburg authorities seem to be doing the right thing: Petersburg is a big, multinational, multi-religious city, and therefore representatives of the southern regions of the country can take part in legislative patrols to ensure safety in the city. But on the other hand, this idea looks strange. And the oddity arises exactly for the same reasons: Peter is a multiethnic and multi-confessional city. If certain civilian patrols are to be introduced in order to increase the level of security on the streets of the city on the Neva, then why do the regional authorities necessarily give directives to representatives of the North Caucasian republics on these same patrols? If you care about the “non-derogation of rights” of “St. Petersburg people from the Caucasus”, then why don't you care about similar issues in relation to, for example, “St. Petersburg people from Yakutia”, “St. Petersburg people from Tatarstan” or “St. Petersburg people from the Khanty-Mansi Autonomous Okrug” ... It seems that the main focus in the formation of patrols, it is done on those whose half-brothers allow more offenses in St. Petersburg, but will not this provoke the already heated situation to a real explosion? I would like to think that they will not provoke, but ...

If the authorities of St. Petersburg care about establishing positive relations between representatives of different nationalities living in the Northern capital, is it possible to find other options to solve this problem? Let's just say the options are humanitarian. In the end, the formation of patrol teams from the youth on the ethnic principle indirectly hints that in the city in the protection of law and order is not a person’s status, not his professional competence, and not even a sincere desire to help law enforcement officers, but his “blood” . If this is exactly the logic, then it may well go so far that one will have to enter a “civilian patrol” according to a representative from each nationality residing in the city ... We understand tolerance and all that, but what does this tolerance ultimately lead to? At first, patrols with the “obligatory presence” of the national component, then someone decides that the same state of affairs should be in the police, in the courts, and in local legislative and executive bodies. The situation will turn into a kind of directive: “Brothers, vote as you like, and in Peter's Assembly, 10 Russians, 1 Armenian, 1 Azeri, 1 Chechen, 1 Ingush, 1 Koryak, 1 Don Cossack, 1 Ingush, Dongh Cossack, XNUMX Ingush, XNUMX Koryak, XNUMX Don Cossack, XNUMX Ingush, Dongh Cossack, XNUMX Ingush, XNUMX Koryak, XNUMX Don Cossack, XNUMX Ingush, Andyou Xygum "As they say, take out and put us an Adyg (forgive the Circassians) to increase tolerance in the city ... Did not find the Circassian? So bring! ..

Is the main reason for the large number of offenses in the large Russian cities because there are no “multinational” youth patrols in these cities? Well, it is unlikely ... The main reason is not at all that there are no Avars, Cossacks or Lezghins everywhere in the patrols, and even that the “civilian” patrols themselves are not everywhere, but that our legislation with all due respect to him, it’s far from being fulfilled by all, far from everywhere and not at 100%. Moreover, legal nihilism today, which is a truly scandalous fact, is characteristic even for representatives of government bodies. The lack of personal responsibility, and especially personal responsibility among some representatives of law enforcement and executive authorities — these are the main reasons that we had (and in some cases did not disappear) shooting weddings, and well-earning underground casinos, and hundreds of outlets on the completely free distribution of narcotic drugs or so-called fake vodka. When the corruption component is extremely high, then you can even enter the Martians into youth patrols, to sense something ...

Ctrl Enter
Noticed oshЫbku Highlight text and press. Ctrl + Enter
We are
Police cut. Who will keep order?Is there a solution to the problem of patriotic education of young people? Private initiatives
Military Reviewin Yandex News
Military Reviewin Google News
36 comments
Information
Dear reader, to leave comments on the publication, you must sign in.