January 31 2014
155
After the Brussels speech by Russian President Vladimir Putin, in which he declared that Russia would continue to provide financial and economic assistance to Ukraine, even if the composition of the Ukrainian government seriously changed, many people in Russia and Ukraine were puzzled. If you believe President Putin’s words, the Russian leadership today doesn’t really care what forces are at the Ukrainian helm, and what policies these forces implement: there will be a pro-Russian - there will be loans and low gas prices, there will be an anti-Russian - everything will be the same ... then, excuse me, a strange position, giving away some fatalism, or something ... "What the will, that bondage is all one ..." Could a state like the Russian Federation allow today to have such an unintelligible position that, in all likelihood, has very much attracted What about the West? Of course not! If you allow yourself this point of view, then in the future it will be extremely foolish to look for those guilty of what is happening (and may still happen) in Ukraine. In general, the words of Vladimir Putin, people who are frankly worried about the future of the fraternal state (and I allow myself to suggest that the overwhelming majority of them are in Russia), are clearly not pleased.


Apparently, realizing that in Brussels he said something, to put it mildly, not that (well, or simply using the postulate actively promoted by the West itself: we say one thing - we do another), Vladimir Putin decided to somewhat transform what was already said in Russia. Transformation happened fast enough. And now, first, the Russian government’s chairman, Dmitry Medvedev, “explained” to the head of state that Ukraine, even after lowering gas prices and a number of credit concessions, continues to accumulate debts, and then, “after some discussion, our tandem” concluded that sending billions (in dollars) of credit tranches to neighbors today is somehow unjustified. The final idea was formulated by Dmitry Medvedev:

Understanding the need to fulfill all the agreements, we must do this meaningfully, and meaningfully it can only be done when we understand what the government will be like, who will work there, and what rules they will follow.

In other words, the Russian authorities decided to temporarily suspend the receipt of tranches to Ukraine in order to wait for, and who will replace Mykola Azarov as the Ukrainian prime minister. And such a decision already looks much more justified than the words that, they say, we will give the money to everyone, despite their political views and economic potentials — at least for Tyagnibok ...

Immediately after the decision was taken to suspend the transfer of the next tranche (2 billion dollars from 15-ti) messages came in the form of certain aspirations from Kiev. Acting Chairman of the Ukrainian Cabinet of Ministers Serhiy Arbuzov, who, by the way, remained virtually the only “capable” legitimate “pilot” of the liner named “Ukraine” after leaving for the hospital, Viktor Yanukovych, said that Kiev expects from Russia that very soon 2 billionth tranche , the transfer of which to Ukraine was suspended. 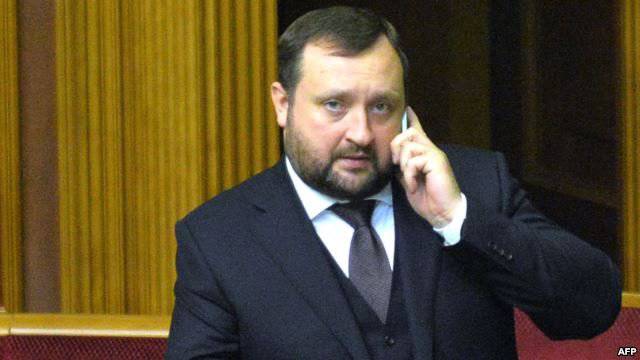 Well, well - to understand Sergey Arbuzov’s wish, in principle, is not difficult. It’s not at all calm under the windows, in the western regions there is an unconstitutional coup, global financial agencies are sleeping and they see a decline in Ukraine’s credit ratings and its default by default, and then Viktor Fedorovich was a bit addicted. In general, the acting Prime Minister of Ukraine, who was actually abandoned (by virtue of his position as First Deputy Prime Minister), I'm sorry, naked at the embrasure, can hardly be envied today. The only thing that can save the legitimate power in Ukraine and will not allow this country to fall apart according to the Yugoslav example with a bloody script and afterword is the firm position and help of Russia. And the help is not anyhow to whom, not to the henchmen of Western "ideals" who have already shown their "hare", speaking under the Nazi banners, but help exclusively to the legitimate authorities. How pro-Russian the current legitimate authorities of Ukraine are is a separate question ... The same separate question: how can a pro-Russian representative of these authorities (Acting Prime Minister), Mr. Arbuzov, be considered in such a situation?

Sergey Arbuzov is a very original person. He is a native of Donbass, but at one time he actively supported the “orange movement” in Ukraine, joining the party “Our Ukraine”, which during the years of “heyday” was headed by Viktor Yushchenko. In 2006, together with the Orange Party, he tried to break into the Donetsk Regional Council, but failed miserably without gaining 3% of the votes.

After that, Mr. Arbuzov’s political sympathies changed somewhat, or rather, his political platform turned out to be obscured by economic activity. Serhiy Arbuzov "headlong" went into banking, and, by an interesting coincidence, he ended up in the so-called (called in Ukraine) Yanukovych "family". Arbuzov got on the post of chairman of the board of the UBR (All-Ukrainian Development Bank), which, according to some sources, is owned by the son of the Ukrainian president, Alexander Yanukovich. In December, 2010 Arbuzov became head of the National Bank of Ukraine, and in 2012, he became deputy prime minister of the government.

Such a person hopes to receive the next Russian tranche, which (tranche) on the one hand can help the Ukrainian economy to stay afloat, but on the other hand can become a tasty morsel for those who, through the “club” with the active patting on the shoulder, break to power in Ukraine. For the second, the Russian tranches will be a real gift "from the enemy" - a sort of "lifting", which, of course, no one will return ...

In this regard, the Russian authorities would have to tighten the position by announcing possible sanctions against individuals who are now organizing and sponsoring measures to seize power in Ukraine. Trying to "like" the West today is simply counterproductive, since what is happening on the territory of Ukraine today is a clear anti-Russian front. If the threat is not stopped at least economically, if financial guarantees are not given exclusively to pro-Russian political forces in Ukraine, then ultimately this state can expect the most unenviable scenario, which, for example, the Serbs can tell a lot ...

Ctrl Enter
Noticed oshЫbku Highlight text and press. Ctrl + Enter
We are
Situational analysis of the death of the MH17 flight (Malaysian Boeing 777), made on the basis of engineering analysis from 15.08.2014Results of the week. “When a lot of people look stupid, it starts to look normal.”
Military Reviewin Yandex News
Military Reviewin Google News
155 comments
Information
Dear reader, to leave comments on the publication, you must sign in.