Guarding the rule of law. Special Report by Alexander Sladkov 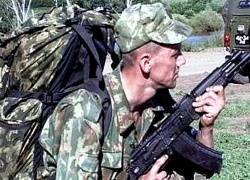 Internal troops of the Ministry of Internal Affairs of Russia. They are also called warring troops, because some of their units and formations periodically perform their work in the North Caucasus. But even among them, a special place is occupied by the 46-I separate operational team, which is constantly located on the territory of Chechnya.

City of Grozny, six in the morning, Monday. Common garrison exercise is a tradition. The orchestra is sure to play: it seems that it is impossible to do without any trumpeters and drummers at any event in the brigade.

This is the largest brigade in the world, it is time for her to the Guinness Book of Records. The soldiers and officers who serve here are enough to staff as many as five brigades of the Ministry of Defense of the Russian Federation. However, this organism is highly organized and well managed.

Countrywide, the work is enormous. Commander of the Interior Troops of the Ministry of Internal Affairs of Russia Nikolay Rogozhkin explained: “During 2010, together with the internal affairs agencies, we carry out this work together with other security agencies. More than one million eight hundred thousand soldiers of internal troops stood out. But it’s not enough for me to judge. But the tasks which were set before us, are fully implemented. "

46-I brigade to curb riots does not work, football games do not protect. Her business is to protect the republic from terrorism. The Chechen militiamen, the FSB are also actively involved in this. This joint work is a war with bandit underground. Therefore, the soldiers are taught, and here all the soldiers are contract soldiers, only what is necessary in this very war. The commander of the reconnaissance company 46 of the Internal Troops Brigade of the Ministry of Internal Affairs of Russia Vasily Paukov explained: “The service takes about 70 percent of personal time. Well, 30 percent are divided as follows: 20 - for rest, ten - personal time. Rest arrange as much as possible: view TV shows, reading books, self-education. "

In the mountainous district center of Vedeno, militants very recently fought. Now it is calm here, in the near future - there will be a resort. Vedensky battalion of the 46 brigade. Yesterday his companies were scattered throughout the mountains. The battalion commander, Anzor Magomadov, recalls: “We raised from everywhere, reconnaissance patrols were raised from Itum-Kale. And here the events were held for two or three days, they were held for two weeks, they passed through the forests, they passed through 150-200 and were cold, hungry. Now we have perfect conditions, the whole personnel of the battalion is in place, here, with us. "

In this battalion, everything from the commander to the cook is Chechens. By the way, it's easier for them to solve personal issues. Fighters live here with their families. The town has just been opened, everything is new. And in Vedeno, and in Grozny, in other places of deployment of the brigade - perfect order, cleanliness. Such is the style of the garrison economy. On the wall is a memorial plaque with the names of the dead commanders of the company. Serving here is not just difficult - it is dangerous.

Commander of the Interior Troops of the Ministry of Internal Affairs of Russia Nikolay Rogozhkin said: “Yes, I would like it to have more money, but the government doesn’t have a rubber pocket. And what we give out today, we spend prudently. And first of all, all the technical equipment of the troops. Of course, all technical equipment has made a step forward recently. I think that in the future we will develop in accordance with the armament program that we have compiled before 2020 of the year. "

A few words about the technical equipment. Urus-Martan, station of the GLONASS system of the 46-th brigade. Here is a small set of equipment, even smaller - in the mountains, in the field. Through the satellites you can see where a soldier is located, a stable closed connection works.

The squad of special forces 46-1 brigade returns from Kabardino-Balkaria, where he performed the combat mission. In the park, special forces are met by representatives of the management and the orchestra. This is another tradition established in Chechnya. Behind the hard work, but people are smiling. Each soldier in the brigade is constantly made to understand: "You are doing the right thing - for the country, for the people!"

23: 00. On the parade ground - people with machine guns and machine guns. They explain to us that if a brigade is attacked at night, then these soldiers will take the fight until the rest are alarmed. So passed one of the peaceful days of the 46 th warring brigade.