Russia vs. China. Fight for Central Asia ahead? 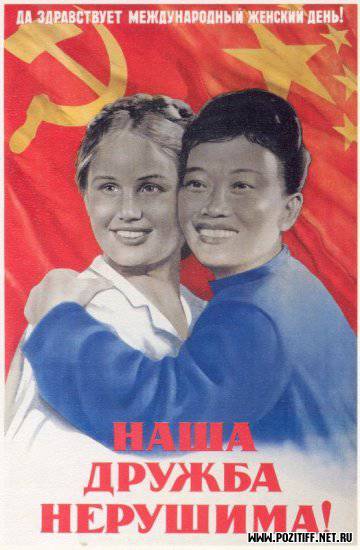 Seeing how dynamically China has been developing lately, and how Russia is humbly looking at the Chinese "invasion" in the zone of its once-immutable interests of Central Asia, one involuntarily wonders how far Russia is ready to follow this line of behavior towards China in the Central Asian region, being content with the minor role? Here is what Zbigniew Brzezinski wrote in 90-s in his book “The Great Chessboard”, some excerpts from the summarizing part of the chapter “The Eurasian Balkans”: “The geostrategic consequences for America are obvious: America is too far away to dominate this part of Eurasia (Caucasus, Middle Asia - E.H.'s note), but too strong not to be involved in events at this theater. All countries in this region view American participation as necessary for their survival. Russia is too weak to restore imperial dominance over the region or to exclude other actors from its fate, but it is too close and too strong to neglect.


China is too strong, and Russia and the states of Central Asia cannot but fear it; nevertheless, its very presence and economic dynamism facilitate the realization of Central Asia’s aspiration to enter a wider global arena. Hence the conclusion that America’s primary interest is to help ensure a situation in which no power would control this geopolitical space, and the world community would have unhindered financial and economic access to it.
The states that deserve the strongest geopolitical support from America are Azerbaijan, Uzbekistan and (outside this region) Ukraine; all three are geopolitical centers.

The role of Kiev reinforces the argument that Ukraine is a key state insofar as its own future evolution of Russia is affected. At the same time, Kazakhstan (given its scale, economic potential and geographically important location) also deserves reasonable international support and long-term economic assistance.

In this region, America shares common interests not only with stable, pro-Western Turkey, but also with Iran and China.

China’s growing economic presence in the region and its political stake in regional independence are also in the interests of America. Chinese support for Pakistani efforts in Afghanistan is also a positive factor, since closer Pakistani-Afghan relations would make international access to Turkmenistan more likely, thereby helping to strengthen both this state and Uzbekistan (if Kazakhstan fluctuates). ”

The unhindered access of the “world community” to one region or another can be interpreted in the Anglo-Saxon presentation very widely, from international trade on the conditions set by the West to humanitarian bombardments, if one state or another is rich in hydrocarbon resources for some reason resists mutually beneficial "trade and economic relations with world powers.

What kind of “powerful geopolitical support” to Ukraine is provided by our Western “partners”, we can now observe with our own eyes, and the Central Asian elites are surely watching these processes very carefully. Depending on whether Russia will win the fight for Ukraine or not, it will be easy or, on the contrary, integration of the post-Soviet South into the Eurasian project is very difficult.

Brzezinski writes directly that the growing presence of China in the "Eurasian Balkans" is beneficial to America. Here, the interests of the Anglo-Saxons and the Chinese are the same, so in order to maintain their positions, Russia needs to carry out a wide range of economic and humanitarian measures in the region, from investments in new production to numerous humanitarian programs. The rudiments of all this are there, but they are extremely small and fragmented, the efforts that Russia is putting to the region of Central Asia are currently insufficient. And if you still remember the “warm and friendly” attitude in Russia towards people coming to work from Central Asia, you can at least remotely understand how Russia loses in the struggle for the South with consolidated Western China efforts.

In fact, so far only with the hands of China, the West cuts off Central Asia from Russia. The economic expansion of China, which has been slowly but surely increasing in the post-Soviet South, over the past twenty years, is only the first step in the possible future colonization of Central Asia and the acquisition by the states of a new, more rigid and pragmatic “older brother” in the person of the Middle Kingdom.

In modern conditions, real hostilities are an extreme step, when all other peaceful ways and means have been exhausted.

While the humanitarian instrument of “seizure” by China of Central Asia is the SCO, this structure gives the Celestial Empire a completely official corridor of advancement in the region.

The fact that the Chinese initiative to form the SCO Development Bank did not immediately succeed, did not prevent Xi Jinping from taking a ride before the summit in almost the entire post-Soviet Central Asia (with the exception of Tajikistan) and sign agreements worth several billions of dollars. It must be said that due to the fact that the virus is rampant in Russia with virtually nothing of unlimited corruption and the craze for leading various large-scale sports events, we simply have no opportunity to repeat the “feat” of Comrade X in relation to Central Asia.

If one imagined the situation metaphorically, the Chinese dragon looked at the Russian bear for a long time, and when he realized that he didn’t have much strength, he began to "choke" in "golden paws" of Central Asia.

The next stage of expansion of China in the region is the protection of the infrastructure built on Chinese money (pipelines) and "peacekeeping" missions. The “Germans of the East” never give nothing for nothing (unlike Russia, which can forgive debts - a fresh example is Kyrgyzstan). And here for the Chinese just a gift of fate, leaving this year the main group of NATO from Afghanistan. Now, under the trend of “security threat in Central Asia” and under the auspices of the SCO, it will be possible to crush even more deeply the Chinese dragon paws of the region.

“We need to learn how to protect cross-border pipelines after their introduction due to security risks in Xinjiang and Central Asia,” said Xing Guangcheng, a specialist in Central Asia at the Chinese Academy of Social Sciences.

Further, as soon as China performs its first “peacekeeping” mission in Central Asia, the “Russian bear” can finally pack its bags, “close the den” and leave the post-Soviet South.

Against the background of the decreasing influence of Russia in Central Asia, abstraction from helping to resolve regional ethnic and territorial problems, the role of China as an arbitrator in the region will finally bury the remnants of Russian influence.

And our Western “friends” (remembering the Brzezinski covenants) very much want to see China as an arbitrator in Central Asia: “Alexandros Petersen, author of the book“ World Island: Eurasian Geopolitics and the Fate of the West ”and co-editor of the site Chinaincentralasia.com, said that Chinese officials and entrepreneurs did not deal with local communities or did not take their social responsibilities in the countries of Central Asia seriously, thus causing further discontent about China.

“Sometimes Chinese officials missed this opportunity because they were too careful,” he says. "They believe that China should work in the background."

One example is the inaction of the Shanghai Cooperation Organization (SCO) under the leadership of China during ethnic clashes in Kyrgyzstan in 2010, in which about 420 people died, Petersen said.

The SCO, founded by China, Russia and Central Asian countries in 1996, called for a diplomatic approach to resolving the crisis, rather than playing a more active role, and not showing up as good forces in the region, Petersen said.

“The SCO can become a more significant actor when it comes to establishing stability and security, as well as political integration,” he says.

Yes, while the Chinese comrades were “ashamed” to intervene in the Central Asian ethnic contradictions, but only for the time being ...

In a recent interview given by Ukrainska Pravda, Zbigniew Brzezinski, he said: “... Russia's prospects at the head of the Eurasian Union are fiction. And this union will break up - for economic, social and personal reasons. As a result, it will only lead to Russia's growing unwillingness to meet the growing influence of China in Central Asia. ”

Nobody has canceled the goals of the West to knock together Russia and China, Central Asia in the upcoming geopolitical circumstances - almost an ideal battlefield.

According to the fierce resistance of the West of Ukrainian-Russian integration, it can be assumed that the fight in Central Asia can be even hotter. And here the anti-Russian efforts in relation to Eurasian integration will be doubled - the West plus China.

It’s time for the Russian President to decide what is more important for him, Olympiads, football championships, etc. or Eurasian integration project.
And most importantly, how ready is he for the future clash for Central Asia ...