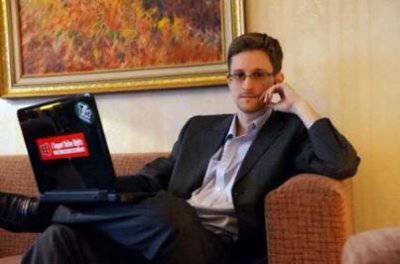 The fact that they want to remove Snowden - and not quietly, but with an advertising campaign - is no longer news. However, in recent days, clouds have begun to thicken around the name of the public informer. Apparently, with the approach of the Olympics - and Western intelligence agencies planned to eliminate Edward in her early days, when the FSB moves to Sochi and focuses entirely on the safety of athletes and the public, which will be helped by American “colleagues” - hairy hands have much in it’s Washington’s hawks , and the fingers trembled on the triggers.


The audience that eats McDonald's fat products in front of Ti-Wee screens, washing it down with effervescent and sweet Coca-Cola, recently received the final image of Snowden, the enemy who sold the secrets of his homeland to the damned Soviets, headed by the main communist and KGB spy of all times and peoples - V. Putin.

Michael Rogers (Republican, Chairman of the Intelligence Committee of the House of Representatives) and Dianne Feinstein (Democrat, who heads the Senate Intelligence Committee) came to the powerful CBS channel of America. On the activities of Snowden, they told America in the program "Face the nation." Snowden, who lives in Russia, in the end turned out to be like an “ass to the nation.”

Having shot the face, the tireless Rodgers went on the transfer to another TV channel - NBC. There he also spoke about Snowden and about the harm he did to the great American state.

Thus, through the powerful American media, both the Republican Party and the Democratic Party, as well as the parliament, launched a manipulative attack.

Both Feinstein and Rogers very strongly suggested that the fugitive Snowden could receive help from foreign intelligence services: without it, he simply could not have access to some data. He was certainly helped, although there is no direct evidence of this. If they had not helped, said Mr. Rogers, then how could he have so thoroughly prepared an escape? And how to steal files? Everything is very smooth.

Rogers forgot to tell more about epilepsy, from which Snowden, having grabbed millions of files, flew to Hong Kong for treatment. And the boss let him go easily. This is absolutely amazing. Apparently, all epileptics periodically fly to Hong Kong. So who is the chief of Snowden?

Speaking in a television program, Rogers said that "there are a number of interesting questions, the answers to which suggest that Russia played a role in the Snowden case." And since Rogers was with us from the intelligence committee, he, using his authority, said: the main part of the information stolen by the fugitive did not concern the NSA surveillance program, but the US military capabilities.

Democratic Feinstein said nothing about Russia, but she was asked about Russia. Responding to a question about whether she admits that Snowden received Moscow assistance, she said: “He could well receive it. At this stage, we do not know. "

And now the United States will have to spend, "Rogers said," billions and billions "of dollars, in order to" put in order "what Snowden had destroyed with his enemy activities. (In one fell swoop, two birds with one stone killed: and the external enemy is designated - Russia, and it is time to inflate the budgets, because fighting the enemy is worth the money. Snowden played, so it goes into the hands of the special services and their lobby from Congress!)

Here, as if in the sequel of the series, another Mr, a chairman of the National Security Committee of the House of Representatives Michael McCall, appeared on a nearby TV channel, ABC. In an interview, he said that the disclosure of secret information by E. Snowden could have been inspired by the special services of other countries. And again a proper name was sounded - Russia. “I can’t definitely say that Russia helped him. But I am convinced that a foreign power was behind his actions, ”said McCall.

Like this. Three of the most popular TV channels hammered into the American trustful heads a new “mulk” about the Russian trail.

Here, even the brain, soaked through with black Coca-Cola and white fat from donuts, will begin to think in the right direction. Something like this: “So, these damned Russians started something again. Not only we nakostyly them in World War II and in Vietnam! They're losing their temper again! ”

The newest series, if you think about it, is a direct continuation of the malicious statement of the former CIA leader James Woolsey, the Mr. who said in December that Snowden should be “hanged”.

However, before Woolsey, the above mentioned Rogers spoke with aggressive statements. He offered to make a special list of destruction, where to include and Snowden. Who this figure is going to destroy along with Snowden, not reported. But we, of course, guess ...

Edward, who lives, as it is known, somewhere in Moscow, has become frightened. He gave an electronic interview to The New Yorker magazine and explained: “This passage about the fact that I am a Russian spy is ridiculous. I worked alone, without any help, especially without government. This does not stick to me. It is quite clear that this is a fake. The American people are smarter than politicians think. ” Edward had an argument. If he (Edward) really was a Russian agent, he would not have been sitting in Sheremetyevo transit zone for so long.

Well, of course, the spy would immediately go to the Kremlin to drink Putinka with Putin and have a snack with salted or pickled cucumbers. Well everyone knows that. But marinating for more than a month at the airport is a lot of dorks. This Snowden did not say, but it is clear without Coca-Cola.

Frightened Snowden promised to protect the lawyer Kucherena. No, not by myself, but with the help of the Russian police.

“We are worried about the situation around Edward: we see statements made by some US officials, they contain potential and hidden threats that openly call for physical violence against Edward,” a RIA Novosti correspondent quotes Kucheren. The lawyer promised to write a statement to the relevant authorities. The Moscow police will deal with these same Woolsey and Rogers.

On January 22, Edward Snowden was interviewed by the North German broadcaster NDR, in which he expressed confidence that US intelligence officials and the military wanted to kill him. Snowden's meeting with journalists in Moscow was held in secrecy.

As for the government, it does not intend to "pardon" its enemy. The head of the Department of Justice, US Attorney General Eric Holder, said at the University of Virginia: “We have always made it clear <…> that we do not want to consider the possibility of a pardon. If he wants to return to the US and plead guilty, we will talk to his lawyers. "

The new attacks by the “upper ranks” of the USA on Snowden are explained very simply: American society is very disappointed both in congressmen and in the presidential administration.

The report of the independent Federal Council on the protection of civil liberties of the United States said that the NSA phone wiretap is directed against the privacy and civil rights of Americans and should be curtailed, writes "Reedus".

The 238-page document, excerpts from which are published in The New York Times, deals with the use of data obtained during the program. Conclusions: the program itself “lacks solid legal grounds”, and the actual benefits of its implementation in the fight against terrorism are called “minimal”.

“There is not a single case in which she directly contributed to the disclosure of a terrorist plot or led to the breakdown of a terrorist attack,” the report’s authors note.

They emphasize that the activities of the special services "pose a serious threat to private life and civil rights."

Most Americans oppose the massive collection of data by local intelligence agencies. Researchers came to such conclusions, having studied the results of the USA Today and Pew Research Center survey, the channel "RT".

More than 1,5 thousand adult Americans took part in the survey.

About 53% of them said that they did not approve of the activities of the NSA in monitoring data on residents of the United States even in the framework of anti-terrorism activities, reports The Hill. 40% do not object to total control.

The ratio of opposing opinions has changed since July last year: then 50% of respondents favored surveillance, but only 44% opposed.

As they say, find the three differences.

Well, and the last.

During the “Mood of the Nation” public opinion poll, conducted by the Gallup organization, 65% of respondents negatively answered the question of the extent to which the American “system of government and how well it works” satisfy them. Told about it correspondent ITAR-TASS Andrey Shitov.

According to the study, almost two thirds of Americans consider the domestic bureaucracy too cumbersome and influential.

President Obama’s popularity, according to polls, is close to record lows. According to the estimates of Real Clear Politics, on average, he is currently gaining 43% positive responses against 51,4% negative ones.

But bad - Snowden. And Russia is bad. Around enemies. Oh, how familiar this is ...

Observed and commented on Oleg Chuvakin
- especially for topwar.ru
Ctrl Enter
Noticed oshЫbku Highlight text and press. Ctrl + Enter
We are
Geopolitical Mosaic: Jesse Ventura will become US President in 2016, and Putin will turn Europe into RusropResults of the week. “Excuse me, aren't you crazy?” - “No. I have a certificate "
Military Reviewin Yandex News
Military Reviewin Google News
94 comments
Information
Dear reader, to leave comments on the publication, you must sign in.