On the envy of Russian nationalists to the Ukrainian catastrophe 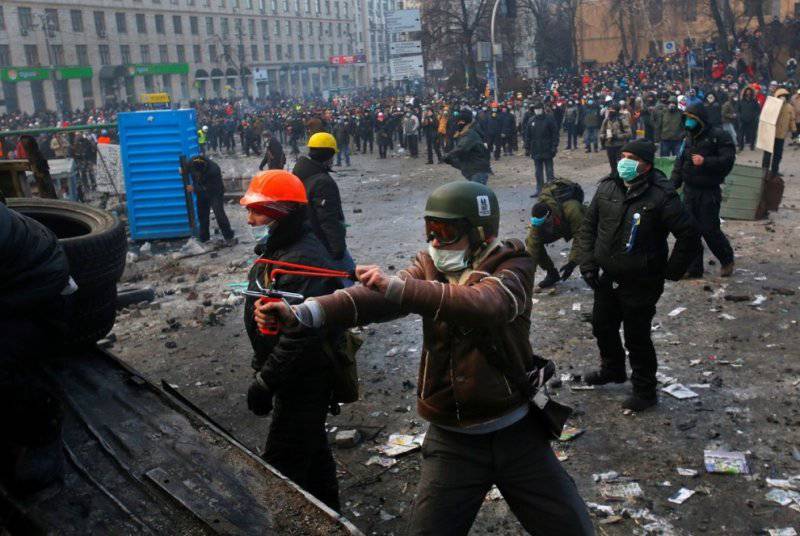 Now, when on the Maidan they began to find corpses with gunshot wounds, people cut their ears to each other, and a wave of looting, robberies and murders is rolling around the city - it's time to talk about vital things: about Ukrainian lessons for Russia and about the students, these lessons of learning.


Ukrainian events explained a lot and showed not only in Ukrainians. A lot has become visible here.

Let me start by introducing you to the opinion of the current situation of environmental activist and well-known oppositionist Evgenia Chirikova:

“According to Solzhenitsyn, Ukrainian nationalists began to cut the“ bitches ”(informers) first in the Gulag. Something in the Ukrainians laid special. "

Then you can go to the next exhibit and bring to your attention the ode to the Maidan of our Dmitry Bykov's pen:

"Yanukovych, you do not have the strength

This time turn the times.

If you want to decide how in Russia, -

How do Russians teach dragons,

What is the Russian mass chewed -

But dragons do not live with you.

We are huge, dead and iron,

We were shackled by hopeless peace

And in the Ukraine - no sleeping sickness,

Ban and threaten in a boorish way -

It means to ruin your career:

After all, neither the khan approach, nor pakhansky

Will not work in your edge.

There was half for you

But now you have reached the line:

Ukraine will not want you

Obviously read envy. The poet D. Bykov envies the Ukrainians that their Maidans are much more fervent than our Marshlands. Item for envy worthy.

However, it is impossible not to notice that, to describe the reasons for such a difference between Bolotnaya and Maidan, the poet leads, to put it mildly, mystical reasons: dragons, deadness and ironness, sleeping sickness, etc. This is all very nice, of course, but it cannot satisfy a really inquisitive person. .

Let's move from environmentalists and poets to more specific individuals.

Here Yegor Prosvirnin already writes to us by the characteristics of advanced consumption:

“It was the nationalists who set the buses on fire, they were the ones who were pushing the Golden Eagle back, it was they who actually forced the Ukrainian authorities to reckon with the opposition.

But the multinational Russian intelligentsia did not notice that only nationalists were storming the “Berkut”, continuing to rejoice in the intermediate victory of peaceful European values ​​over the evil scoop. Victory won by good European elves with magic liberal wands in their hands is no different.

In general, the Kiev protest presented a good lesson to Russian civil society and clearly showed that the protest movement, no matter how wide, is not able to acquire subjectivity without fists. And if you, as in the old joke, still need not checkers, but go, then the only conclusion you have to draw from all this Ukrainian stories, is that a kind word and scrap iron can be achieved incomparably more than just a kind word. ”

And summing up all this poetic-philosophical discussion - the Russian national-conscious philosopher Konstantin Krylov:

“Many people are crying here - how cool is Maidan, how are they burning there, not like our Marsh. With further zaplachka- "Ukrainians can, but we do not."

Ukrainians, of course, are very cool, but do not forget one simple thing. In Ukraine, Ukrainian nationalism was not banned and repressed. It is generally impossible, since all independence is on the only support - on the Ukrainian national idea. It is IMPOSSIBLE to prohibit or repress it, and in no way or form. Unlike Russia, which stands on the exact opposite idea - the power of national minorities and the suppression of the Russians. Accordingly, the generation of the Russian right is already quietly strangled or rotting in prisons.

And the only difference between the Maidan and the Swamp - I emphasize, the only one! - is the Right Sector. Which unites precisely the frostbitten Ukrainian nationalists, the “white bone”. Formed over twenty years of legal development of the right movement. Yes, controlled without baking (but friendly controlled, since baking consists of the same Ukrainian nationalists, only less romantic and more embittered), but in Ukraine they never imprisoned for any “glory to Ukraine!” And even “bander” what is possible.

And without the Right Sector, the whole Maidan scenario would be absolutely Moscow, including the traditional figures of the “negotiating leaders” and so on.

Let me translate it all into human language.

So, during the time of independence, under the supervision of the Security Service of Ukraine, which most of this independence functioned as a branch of intelligence of the United States and Germany (+ a bit Austria), a nationalist organization was created, trained to create riots and resistance to law enforcement. This organization is currently used as an instrument of a coup d'état and the subordination of the leadership of Ukraine to the will of other states.

In Russia, the situation is quite the opposite. Here the Nazis are "rotted out," and, therefore, the handshaking public, which we had the honor to observe last winter with white ribbons, does not have combat-ready infantry.

This means that our FSB, in contrast to the SBU, is an independent special service, and Russia is a sovereign state. It seems to be good.

But it is - in the opinion of a normal person. The post-Soviet nationalist is not like that.

“So, this is how Ukrainians perceive the choice between the CU and the EU. As a choice between the CLEANER, on which it stinks of rot and where vile creatures who have lost their human appearance dwell - and thus the shop. Where you have to work, the earnings will not be so big, and you no coconuts, pineapples. But this is WHITE WORLD. White, clean world, where it does not stink. DOESNT WELL, yes. Russia in the eyes of Ukrainians is a PASSED PLACE. And no matter how many nishtyakov in this nasty place you can find. There are, of course, non-shy people. Yes, and fastidious - if it will be a maz on a cheap buy trash color for resale, why not. But to go LIVE in a KEPAN PLACE - no, it is unbearable. And they want to live away from the filthy Russian garbage BEST. The vanguard of the nation, its wrought gold. "

They have - peripheral nationalism, the ideology of which is that the nation, about which the “nationalist” cares so much, is in fact incomplete. This is a nation of plebeians, "vile creatures who have lost their human appearance." Such a nation can be saved only by forcing (by forcing, because the nation voluntarily voluntarily takes such steps to the nation) it will join the more highly developed community, even if on the rights of people of the second grade - “Where you have to work, your earnings will not be so big , and no you coconuts, pineapples. But this is WHITE WORLD. ”

Work by whom, Constantine? In a recent essay, your colleague identified this type of employment as a “black woman for two”. Do not take it? Or do you offer it to your people?

The fact that the geopolitical goals of the Third Reich and the White World coincide, up to commas, does not mean anything.

And, of course, it is only our suspicion and suspiciousness that tells us to see corporate interest in the fact that the Russian opposition are so insistently calling for mercy towards the accused in the “swamp case”.

Well, if for one brief moment it is still assumed that all this is not a coincidence, and we are not paranoid, then we get a completely harmonious picture, in which “nationalists”, “liberals”, “ultra-leftists” and “human rights activists” are parts of one mechanism whose purpose is the de-sovereignization of Ukraine and Russia.

And if so, then we can fully agree with their assessment of our power - our power is imputed.

However, what is striking is that when suddenly the brand of “nationalism” suddenly began to be glued to dill and Russophobia. How did this happen?

It's not a secret. Just say this is disgusting, that's silent.

In times of national oppression, the nationalists — that is, fighters for the liberation of their people from the oppression of the invaders — became the best. People with hot hearts, brave men, devotees. Dmitry Donskoy, Gadfly, Evpaty Kolovrat. So told them their love for their neighbors. They stood up against an equal or superior enemy, they relied on the people, they sought their strength and inspiration in it. They dreamed about the development of their people, about progress, about the release of their creative powers.

The people who are now bothering about the topic of national oppression are not concerned with life and death, which immediately tells us about the degree of relevance of the topic, but with the distribution of wealth. That is the work of the commissaries and warrant officers. Well, the people are recruited appropriate - "away from the front, closer to the kitchen." And the fact that they suit each other and the state is not a guerrilla, but a squabble over clothes.

It is clear that professional screening works in this area - not everyone is capable of full commitment in this matter. It is because of this natural selection that K. Krylov and E. Prosvirnin, who conquered the rest of the fauna, came to the top of the nationalist discourse in Russia. And in Ukraine, I'm sorry, Irina Fahrion.

If to put it quite simply, the European / European integration of Russian nationalism is an ideology for Untermensch, which justifies their right to get rations from the White World for selling to him Untermensch-compatriots.

So even here without criminal cases it is clear that it is impossible to legalize such nationalism. Not even because it can become dangerous physically. Not.

Just because it is humiliating.

Ctrl Enter
Noticed oshЫbku Highlight text and press. Ctrl + Enter
We are
As NATO instructors in the territory of a military base in Estonia, trained Ukrainian nationalistsWhat you didn't want to know about England
Military Reviewin Yandex News
Military Reviewin Google News
136 comments
Information
Dear reader, to leave comments on the publication, you must sign in.