Georgian authorities fear repetition of Ukrainian events in their country

January 27 2014
21
Several Georgian TV channels immediately switched to continuous coverage of Ukrainian events. At the same time, the most attention is paid to Ukrainian topics from those media outlets that, let's say, are loyal to the United National Movement - the United National Movement party of Mikhail Saakashvili, settled in the United States of America. About Saakashvili himself and his current activities in the United States a bit later, but for now about the reasons for such a high interest in Georgia in the events of the “Maidan” sense. 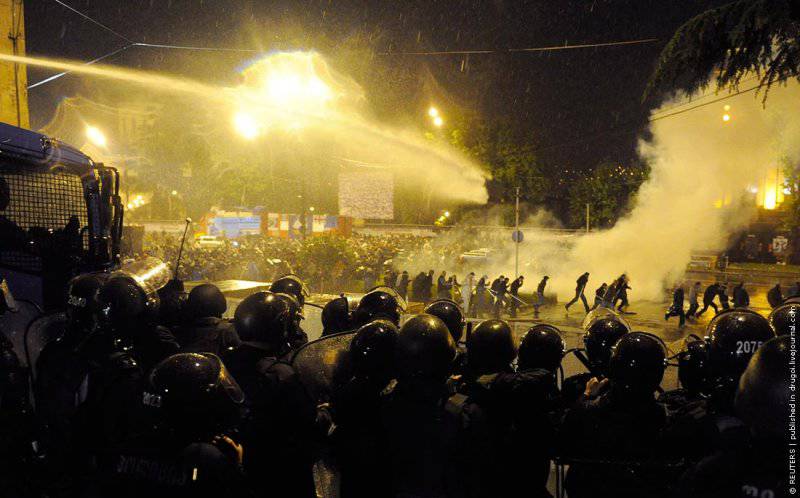 At the end of last week, parliamentarians from the “United National Movement” of Georgia appeared at a regular meeting in scarves, represented by the colors of the Ukrainian flag. According to Saakashvili’s like-minded people, this move is connected with the support of those “democratic” processes that are currently taking place on Ukrainian territory. After these words, I just want to say: the poor-poor Greek word "democracy", into which you have been turned by people who are trying with all their might to impersonate your adherents. Now, from the very term "democracy" and "democratic transformations" it is struck with such, excuse me, politician fuss, from which nothing but dislike is born.

Based on the position of the UNM deputies, democracy is not at all the free will of representatives of civil society during the election of government bodies and other important issues for the state and its people, but exclusively “stick”, chaos, anarchy and permissiveness, which oversteps imaginable and inconceivable boundaries. Declaring support for "democratic" processes in Ukraine, the current Georgian oppositionists (and the UN in Georgia in opposition after the defeat at the elections), are already openly saying that they support violence, the clash of the representatives of one people, aimed practically at the separation of the state. Well, they have crushed Georgia with their inept policies, now they crave the same for Ukraine ...

Against the background of such statements by the Georgian opposition, the current Georgian authorities (the parliamentary majority formed by the “Georgian Dream”) are forced to seek from the European Union “brothers” guarantees that in the near future Ukrainian events will not be broadcast on Georgian territory. It is noteworthy that representatives of the ruling party of Georgia are already directly addressing the bosses of the European Union in order to obtain guarantees that Tbilisi’s fate will not be exactly affected by Kiev. An interesting situation, is not it? After all, such appeals to Brussels official Tbilisi frankly makes it clear that behind all Ukrainian protests is the West, which if desired can play the "opposition" card in other former Soviet republics - in Georgia, as an option. That is, there is enough evidence that Ukrainian riots, pogroms and the actual anti-constitutional coup (for the time being of a regional character) are behind the Ukrainian riots. One of such evidence is the Georgian appeal to the EU. But, nevertheless, there are people who continue to naively believe that the Ukrainian events are only the will of the Ukrainian people ...

After the appeal of the Georgian authorities to the EU about the consolidated support of those who signed associative agreements with the European Union (and Georgia, as we recall, one of these states), several European Union politicians expressed a desire to visit Georgia and, apparently, to announce their support in Tbilisi. Like, if you initialed the association agreement, then you have nothing to fear - not that the Ukrainians ... Who will arrive in Georgia to explain this moment? These are the foreign ministers of Germany, Frank-Walter Steinmeier, as well as the French foreign minister, Laurent Fabius. The grandeur of European politics is himself and a gentleman like Toomas Hendrik Ilves, the president of Estonia, who is planning to arrive in Tbilisi the other day to confirm the “partner” support for the course chosen by Georgia. In Davos, Ilves has already met with Georgian Prime Minister Garibashvili, with whom he had previously discussed the designated actions.

And in fact, in the case of Georgia, none of the European politicians even speak of any “will of the people” or “civilian aspirations”. One postulate - the signing and initialing of an association agreement with the European Union. The latest proof that the events in Ukraine were provoked by Western scriptwriters as Yanukovych’s actual revenge for his demarche at the Vilnius Summit, connected with the postponement of signing the agreement with the EU for an indefinite period.

And after that, someone starts talking about the triumph of democracy! What bayonets are this democracy being worn today? ..
Representatives of the party Saakashvili translate the Ukrainian question into a favorite course for themselves. A member of the UNM Bakradze party enhances the effect by stating the following:

In Ukraine, it is decided whether Russia can restore the Soviet Union. In Kiev, the fate of Georgia is also determined.

Bakradze adds that one should not allow victories in Kiev, quote: “Russian interests”, otherwise it will soon affect Georgia.

Again Russophobia, again the desire to curry favor with those who throw a gnawed bone to Georgia today, in order to demand for this repayment of the debt with interest tomorrow. It is gratifying to be aware of the fact that this is spoken by a representative of a political minority, a zealot of the values ​​of the political corpse of Mikhail Saakashvili. However, as the Ukrainian example shows, modern technologies of distribution, pah, “democracies” have gone so far that, through the manipulation of even the most rotten minority, the West is trying to achieve a digestible result for itself. What subsequently do with this result? - often he himself doesn’t know (it was already, for example, with Yushchenko’s “victory”), but he doesn’t change his plans. But there is only one plan - to reduce the regional and, if possible, global influence of Russia to a minimum, to break the strong historical, cultural, social and economic ties between countries and peoples in order to get the "stuffed" of the next state of "triumphant democracy."

Now the facts about Saakashvili. The ex-president of Georgia today lectures at the Fletcher School at Tufts University. The school is focused on the training of lawyers and diplomats. According to statements coming from Saakashvili’s entourage, the demand for lectures by the ex-president of Georgia in the US is so high that he is busy with work for at least six months, and therefore will not be able to come to Georgia in the near future.

Saakashvili reads his lectures in other US universities. The content and direction of such lectures is quite understandable - behind this Saakashvili and in the States - to sow "reasonable, kind, eternal, anti-Russian" among future American diplomats. Still would! - here he is alive and, unfortunately, unscathed copy (actually speaking laboratory exhibit) of the work of existing American diplomats - and this, by definition, should be of interest to American diplomatic fry.

Perhaps Saakashvili has plans for a “Napoleon” return to Georgia with the goal of re-establishing himself in the power chair. If this really happens, then it will be possible to make an ode about the American die-hard ...

Ctrl Enter
Noticed oshЫbku Highlight text and press. Ctrl + Enter
We are
Day of the national flag of the DPRRussia and Georgia: close contacts of the third degree
Military Reviewin Yandex News
Military Reviewin Google News
21 comment
Information
Dear reader, to leave comments on the publication, you must sign in.