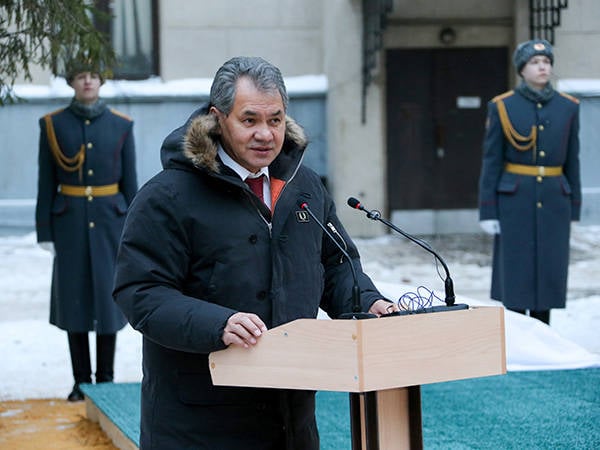 The fact that the head military office of the new state object will appear on Frunzenskaya Embankment, Defense Minister Sergei Shoigu, spoke last year. The start of this construction gave the December decree of the President of the Russian Federation. And today, Shoigu held the ceremony of laying a symbolic stone at the place where, by the end of 2014, they plan to commission the main building of the Center. The pit for it has already been dug in the courtyard of the land staff. What the new building will be like, how many floors will rise, and how many will go deeper into the ground, is a mystery with seven seals. Whether the office of the country's president will be located there, the minister did not say either. But he clarified that a functionally new facility can be compared with the rate of the Supreme Command of the Soviet era. But, of course, with a completely different technological "stuffing" - the Center will be equipped with the most advanced equipment.


“Of course, we will do everything to ensure that the best personnel, trained to all the requirements of the modern defense management of the country, worked here,” Shoigu promised.

It was decided to train specialists for service in the Center in some army colleges. The Academy of the General Staff for this task may even form a separate department. This is not about the release of "simple" officers-managers. At the request of the correspondent of "RG" Shoigu said: to work in the new state structure requires multilateral professionals.

The center will cover not only the most important units of the leadership of the Armed Forces - from the General Staff and the High Command to military districts, armies and brigades - but will also quickly coordinate the interaction between fifty ministries and departments. First of all, it will be required if there is a threat to the national security of Russia. In addition, decisions will be made here concerning daily life and the provision of all military units of the state. The Center is also considered as a tool for managing the economy of a special period. According to Shoigu, the Ministry of Defense is the first of the federal agencies that lays the foundation for the foundation of the country's defense management for the next 20-25 years.

The technical equipment of the Center in the future will allow receiving information from all over Russia in real time. And also - to simulate various scenarios of the situation in the country. The military say that it is equally important to determine world trends and patterns in a timely manner. They will form the basis of strategic and operational planning and decision-making by state leaders in peacetime and wartime. The possibilities of the Center guarantee the solution of such problems.

But first you need to perform a huge amount of work. Including, on saturation of the Center with the latest computer hardware and software. When they were still talking about building this structure, the defense minister spoke very briefly about this: “Now it’s impossible to manage a slide rule, gathering around a thousand and a half officers around you. This time has been irretrievably gone.” It is the technological base for the center that interests Shoigu in the first place. But he will personally monitor the progress of construction work. Shoigu promised to come to this on the Frunze Embankment weekly.

Recall that the minister had previously spoken about the composition of the future state structure - it will include three components: the Center for the Management of Strategic Nuclear Forces, the Center for Command and Control, and the Center for the daily operations of the Armed Forces. But what role will then remain for the Central Command Post of the General Staff?

Shoigu explained that he will be one of the constituent parts of the National Center, "and not the biggest one."

Ctrl Enter
Noticed oshЫbku Highlight text and press. Ctrl + Enter
We are
The Supreme Headquarters will appear in Moscow in case of war
Military Reviewin Yandex News
Military Reviewin Google News
29 comments
Information
Dear reader, to leave comments on the publication, you must sign in.