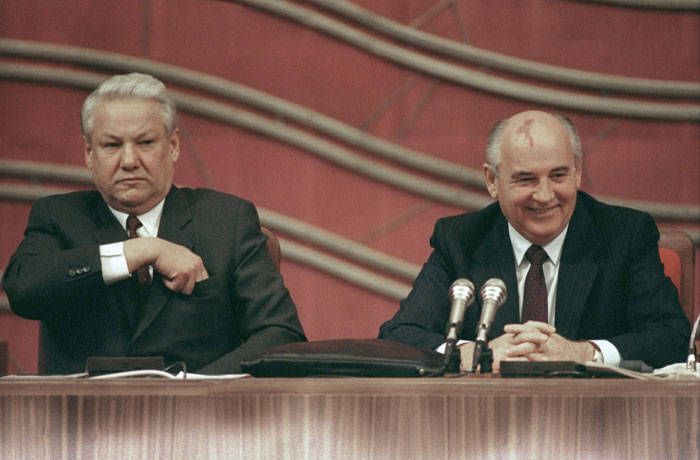 "However," continues the special project "Portraits of Russian Tsars in the West." This topic is interesting, first of all, because Russian leaders have always been the embodiment of their country for the western elite and the townsfolk. And in relation to the “king” figure, one can judge which image of Russia was in demand in the West at one time or another. It should be noted that most of the portraits in our gallery are holographic pictures. After all, when it was beneficial for Western politicians to conclude a tactical alliance with Moscow, the king was portrayed as a wise ruler capable of pragmatic deals, when the need for an alliance with the Russians fell away, the picture was shown from a different angle - traditional Russophobic stereotypes were reborn, and the king turned into a "cunning Byzantine" , an unpredictable despot or a mindless comedian.


If we talk about the current epoch, the image of Putin, like the image of his predecessors, in the West is constantly transforming depending on the foreign policy conjuncture. (However, in the Medvedev period, the existence of a tandem facilitated the task: the portrait of one leader was served in light, the second - in dark colors). In most cases, however, Western portrait painters operated with exactly “holographic pictures”, occasionally turning them with the right side: “wolf - hare”, “hare - wolf”, as in Soviet stickers based on “Well, wait a minute”.

"Holographic" somewhat different kind can be traced when the Russian tsar (and, therefore, our country) is viewed by researchers of a later era. It is easy to see that contemporaries evaluate people and events in the system of values ​​and concepts of “time of action”, and historians unobtrusively approach the past with the criteria of the future - when out of good motives, and when out of all the same applied ones. By the way, we should remember about the “holographic features” when, for internal political reasons, some Russian experts trump these or those quotes that reflect “objective Western assessments”.

Gorbimania: Narcissus on the throne

The portrait of Mikhail Gorbachev in the West was created according to traditional canons. His American counterpart Ronald Reagan, who called the policy of detente "defeatism" and proclaimed the USSR "evil empire," did not see at first those advantages that can be drawn from the idealism of the Soviet Secretary General. He even dubbed him a "hard-headed Bolshevik." As for Gorbachev's “new thinking”, the Western media saw in him “another deception by the communists, the most ambitious of all”.

However, it soon became apparent that Gorby was not the typical Russian tsar, and creating a positive image in the West was almost the main priority for him. “For quanta of fame and calories of self-composing, he offered Reagan invaluable geopolitical gifts,” political scientist Alexander Prokhanov said, however. And Western portrait painters tried their best to please Gorbachev. They portrayed him as a politician of a new type who upholds “universal human values”, admired perestroika and managed to raise a wave of backing in the USA and Europe.

True, the realist politicians understood very well what was really going on. As George Schulz, who held the post of state secretary in the Reagan administration, noted later, “starting from a meeting in Reykjavik, Gorbachev was putting gifts at our feet — concession by concession.” The Soviet leader agreed to an asymmetric reduction of armaments, withdrew troops from Afghanistan, and in fact abandoned the Brezhnev doctrine on interference in the internal affairs of Eastern Europe. And although officially all this was presented in the West as a pragmatic revolution, carried out by a politician who believes in ideals, many secretly called Gorbachev a “narcissus”, on whose complexes the American president successfully played. “For the sake of false praises addressed to you,” said some Western political scientists, “Gorbachev is ready to sacrifice national interests. And when such a person is at the head of an empire, it certainly means its decline. ” In general, in the holographic portrait of the last Soviet Secretary General, on the one hand, you can see the image of a progressive reformer who destroyed the Berlin Wall, and on the other, a self-satisfied combineer, who was surrounded by fingertips by Western leaders. It is this picture that inspires historians who are eager to prove that the United States has won the Cold War.

"In Russia, you can only put on one horse": a few words about the image of "Tsar Boris"

As for Yeltsin, Tsar Boris was initially perceived in the West as a close ally or even a satellite of the United States, which should not be criticized once again. “In Russia, we can only bet on one horse,” “Yeltsin is a giant who can beat a stake in the heart of the Soviet system,” assisted Bill Clinton’s assistants after the Supreme Soviet was dissolved in Moscow. And although some critics noted that the Russian leader had accomplished a constitutional coup, no one listened to their arguments. The official point of view was expressed in the best way possible by the US Undersecretary of State, Clinton’s Oxford classmate Strobe Talbot: “Yeltsin is Russian Charles de Gaulle, who does not hesitate to resort to authoritarian methods in order to bring the country out of chaos.”

After the first meeting in Vancouver in 1993, Clinton called Yeltsin "a man full of energy, a real fighter." “This guy is the same as me,” he said. “In politics, he needs adrenaline.” In the West, they were ready to portray Yeltsin as an assertive and self-confident leader, realizing that behind closed doors he was becoming a pliable and receptive partner. Here is a characteristic dialogue between the two presidents, about which General However told Leonid Ivashov:

“Boris, you have to take some serious step so that I can convince Congress to support your policy,” Clinton once said.

- What, for example? - Yeltsin asked.

“Agree to sell at least 50 percent of Russian weapons-grade uranium and plutonium,” suggested the US president.

“Take at least everything,” his Russian colleague answered.

Yeltsin withdrew troops from the Baltic states, agreed to the expansion of NATO to the East, joined the peacekeeping mission of the Western countries in the Balkans. And it is not surprising that in 1996, the Clinton team portrayed the current Russian president as the "beacon of democracy" and did everything possible to drag him for a second term.

At the end of 90's, the picture turned upside down, and in the West they began to actively discuss the shortcomings of Yeltsin. This was explained by the fact that the foreign policy of the Russian Federation began to change, and the angry rebukes and unexpected improvisations of the Russian president put the Western partners at a dead end. Yeltsin, who had so hard achieved independence from the Politburo, didn’t want to be pushed around by anything else. And it was no coincidence that he was pleased to do something to spite the Americans. He constantly demonstrated his character, then threatening to create the axis Moscow-Beijing-Delhi, then starting to flirt with France and Germany. But, perhaps most of all, Clinton managed to annoy him at the end of 1999, when Russian paratroopers carried out a night march on the capital of Kosovo, Pristina. It was at that moment that the image of Yeltsin in the West changed drastically. He turned into an unruly irrational politician, unable to make informed decisions. And although in many respects this was true, it is not clear why Western politicians saw the light only at the end of 90.

In general, it can be argued that the portraits of the last kings were also holographic. Only one of their sides was, what is called, the front door (as a reward for geopolitical concessions in the West, Gorbachev and Yeltsin were portrayed as the “founding fathers” of democratic Russia), and the second was more realistic (the leaders who surrendered their country were, naturally, perceived as weak-headed rag dolls , by chance turned out to be on top of power).