What other dogs "partners" hang up for the Olympics in Sochi?

January 18 2014
399
And again the Olympic topic ... Well, what to do, if our foreign “partners” give new reasons for discussion, many of which hold the most important international sporting event in Russia, do not give rest. One thing is that in Russia at every corner bearded men in felt boots and jerseys tied with hemp instead of morning coffee are drinking the blood of gays, transvestites and lesbians, sharing it with tame bears, others are overcome by the thought that Vladimir Putin personally fights for the mistakes made by sports the losing Russian athletes from the Maxim machine gun right on Red Square, and still others are absolutely certain that somewhere in distant mines "from the time of Ivan the Terrible" political prisoners were building storages in which money flowed for the future The behavior of the Sochi Olympics - exactly kvadragintillion dollars ... 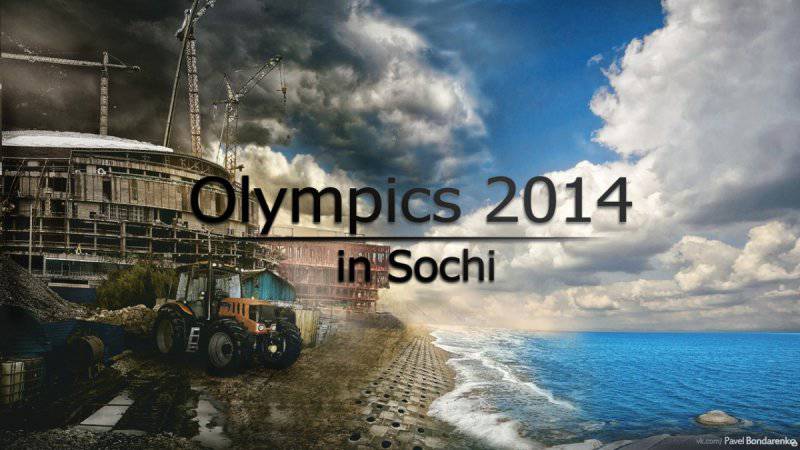 Yes - nonsense! Complete nonsense, our reader will say. However, in fact, a whole range of foreign media is trying to do something like this “informational” work related to Russia, on the eve of the opening of the Winter Olympics. As the saying goes, in the information war, all means are good, and therefore the foreign press and others, let's say, informing institutions, sometimes give out such “pearls” about Russia, Sochi, Russian sports, security and other near Olympic things from which a normal person can appear a reasonable desire to throw the source of such information into the garbage chute, along with the one who “gave birth” to information of this kind.

So, a pair of such pearls, which is clearly aimed at scaring off foreign tourists from visiting the Olympics in Russia, was presented by the American television and radio network CBS. In one of the airs, the correspondent before the story about the terrible terrorist attacks in Volgograd announced the material by saying

В news the tape of the American broadcasting network ABC another correspondent, telling about the car bombing in Pyatigorsk, stated literally the following:
explosive device worked near the venue of the Olympiad
.

It is hardly worth suspecting the people who prepared the lyrics for a speech to a million people in poor knowledge of geography. The purpose of these people is different: to cause fear of the Sochi Olympics and Russia as a whole for those who, firstly, make plans for a trip to Sochi as a sports fan, and, secondly, for those for whom school geography during learning was not the most successful subject. For the average Idaho or Oregon resident - if an ABC or CBS correspondent said that the attacks were “near” Sochi, it means “near Sochi” ... If he said: “you have to be afraid”, it means “you have to be afraid”. If homosexuals "pull out and eat up their hearts," it means that it is so ...

It is unlikely that someone will turn to the map in order to find out that from Volgograd to Sochi by road - more than 950 km, and from Pyatigorsk to Sochi only in a straight line (right through the Caucasus Mountains) - more than three hundred. To understand the situation, one could cite such a “foreign analogue”: the explosions in the London subway occurred “near Paris” or “near Brussels” ... Imagine that the French or Belgian press would write about such publications ... Ours, by and large, is silent they say, freedom of speech ... They say, we will not pay attention to them.

Is this the correct position? If you understand that each publication, similar to what was issued by ABC or CBS on its air, is a clear blow to, let's say, the image of Russia, and if you understand that the absence of counter-arguments is an actual pandering to the clumsy distortion of facts, then what kind of correctness can speech?

Of course, no one says that in Russia everything is perfect with the solution of security problems. No, unfortunately, not perfect. But when someone tries to build a line of frankly dirty information campaign on this, then this is a special topic.
By the way, both Russians and most residents of foreign countries have forgotten that lately (and not only recently), the terrorist underground has always tried to prove itself when it came to mass international events (including a sporting plan). However, very often the sharp corners of this topic were skillfully smoothed out in the press and at government levels, so as not to hurt both the progress of the training of athletes and the image of a particular state.

Recall at least the 2002 Olympics of the Year in American Salt Lake City. Didn't those Olympic games have, let's say, a special background? But what about the attack on the twin towers in New York, on the Pentagon building (Virginia) less than six months before the opening of the Games? However, world news agencies before the Games did not trumble that the attacks took place "near the venues of the Olympics," did not call on citizens to abandon their trip to Salt Lake City. World leaders did not engage in demagogy about their possible refusal to attend the Winter Olympics, for example, due to the violation of the rights and freedoms of the indigenous people of the United States and due to the fact that frank racial discrimination flourished in the States until the seventies.

But there is an example of an information attack (similar, by the way, in Sochi) before the Beijing Olympics, when everyone was suddenly shown the “incredible desire” of the Tibetans to become independent, for which they are ready for anything - even self-immolation. And after all, everything was arranged so that as soon as some “fighter” for Tibetan independence shouted antigovernment slogans with inscriptions on posters in English inevitably, protesting against the holding of the Olympics in the Chinese capital, it immediately (by accidental coincidence) with half a dozen western correspondents. This is indeed an accident, so an accident. From the same series, Saakashvili’s adventure with the obvious indulgence of the White House on the opening day of the Olympics. Now they are trying to play about the same card in Sochi. Only instead of “oppressed Tibetans” - “oppressed Circassian peoples”, to which was added an army of LGBT, a terrorist threat “near the Olympic venues” and much more to discredit.

The Western press, like the ultra-liberal Russian, is massively publishing and at the same time literally savoring the decisions of some politicians affected by the Cold War phobias that they will boycott the Olympics. From the last - a verbal refusal to arrive at the opening of the Winter Olympics of the Swedish Minister of Sports Lena Adelson Liljerrot. What is the reason? As they say, guess from one attempt. The correct answer is in the form of a quote from Liljeroth herself:

A specific situation has arisen in Russia - the government seems to approve of the suppression of homosexuals and democratic activists, the minister said in an interview with the Swedish channel SVT, asking that her statement be considered as political.

The introductory word "seems" in this quotation especially touches ...

It is extremely interesting: and what, there are people who waited for Liljerot at the opening of the Olympiad? .. Someone personally invited her, or what? Well, it’s better to build a question differently: did anyone even know about the existence of this Liljerlot before her “withering” statements and a pre-retirement demarche? She refused ... Oh, oh, oh, what a tragedy.

Obviously, until the last pre-Olympic day, the flow of information mud towards Sochi by foreign (and not only) media will continue. Will he stop during the Olympics? - hardly - after all, not all allocated funds for the anti-PR campaign are still mastered ... By the way, there is an opinion that the interested persons spent more money on the mud spraying of the Sochi Olympic project than Russia spent on holding the Games themselves ...

Ctrl Enter
Noticed oshЫbku Highlight text and press. Ctrl + Enter
We are
Results of the week. “You can legally go. It is difficult to reachGeopolitical Mosaic: Jesse Ventura will become US President in 2016, and Putin will turn Europe into Rusrop
Military Reviewin Yandex News
Military Reviewin Google News
399 comments
Information
Dear reader, to leave comments on the publication, you must sign in.