Who writes the Syrian scripts for the UN Security Council, or the hasty British retreat 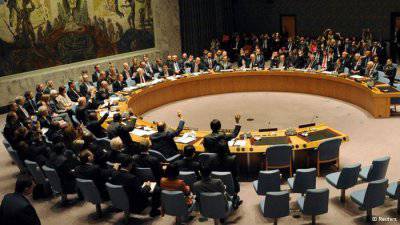 Here are two recent (December) events in Syria. December 22 near the primary school in the village of Umm al-Amad killed seven people: five students and two employees of the school. I wrote about it "Lenta.ru" with reference to SANA. The explosive device installed in the car, the militants activated remotely. The Associated Press, citing an official Syrian source, reports ten dead, five of whom are schoolchildren. By the way: the population of Umm al-Amad is predominantly Shiites. And the second event: the victims of the bombing of the city of Aleppo, which is under the control of the opposition, were at least 44 people. This was reported by the same "Lenta.ru" with reference to France-Presse. According to the Syrian Observatory for Human Rights, there were at least six children among the dead. During the attack, barrel bombs were used: containers with explosives and striking elements. They were dropped from hovering helicopters.


The fact of this bombardment, if the media is a little bit of a thing of the past, became known even on December 15. On that day, the Western press wrote about a series of massive air strikes. All media referred to human rights organizations - to the very same “Syrian Observatory for Human Rights”, for example - that is, to those associated with the so-called “oppositionists”. It was also stated that the death of 350 people was officially confirmed, and human rights activists were crying about more than 700 killed. Also cited the words of an unnamed representative of the Syrian government, who called the bombing "an operation against the militants."

Further, the initiative passed to the UN Security Council - a body that quite often comes in the wake of Western masters. 19 December: The World Organization’s Security Council denounced the barrel bombardment. It was on this day that the well-known “human rights activists” confirmed the fact that Assad troops were using barrel bombs.

However, that December draft resolution was rejected by Russia.

But in January, 2014, the West again decided to condemn the “bloody regime” of Assad - and because of the same bombings (from December 15). But the Russian delegation demanded not only to condemn the Syrian government, but also to prescribe in the text of the resolution some military operations of the Syrian rebels. Moscow did not block the resolution, but insisted on making changes to its text. If we condemn the parties to the Syrian conflict, both of them. As a result, the text was not agreed.

The West does not intend to condemn both sides. All the bad things in Syria are created only by Assad: this position of the West has not changed even when Mr. Obama called off ships with the targeted "Tomahawks." The fact that in Syria there is a terrible war that has been supported for a long time (and even now they are supporting) not only Saudi Arabia and Qatar, but also Washington and Brussels, the West does not like to mention now. The West is more and more concerned about democracy and human rights. It turns out that these rights are addressed directly to al-Qaeda. After all, it is she who fights against Assad.

That is why there was no particular alarm at the UN. They took the resolution back - and indeed! The noise in the media still happened. Food for journalists given. The damned Russian barbarians again did not condemn the Assad regime, which is destroying its own people.

Now, in the West, they say that Russia did not come out for objectivity, but suggested that any mention of Aleppo bombing be removed from the document. But again this is disinformation. how reported 9 January ITAR-TASS, citing a diplomatic source at the headquarters of the world organization, with the initiative of adopting a document in which it was proposed to condemn only the actions of the Syrian authorities, was made by the United Kingdom. According to the source, during the work on the document, the Russian delegation “pointed to the unbalanced nature of the draft statement” and proposed to amend it, in particular, insisting on mentioning the crimes of the opposition. “However, this did not suit the authors of the text, and after a day it was removed from consideration,” the diplomat explained.

As for Western agencies, for example, Reuters заявилоthat the journalists of the agency could not receive the comments of the Russian delegation to the UN.

All this looks like pure propaganda directed against Assad and Russia. Yes, and does not look like-propaganda is. In the era of the so-called "postmodernism", the West suffers an economic fiasco, but tries to succeed in propaganda, in newspaper and television "simulacra" ...

But we will respond to his propaganda with our truth.

Everything from the West is simple. Everything is the same as it was before. Assad is bad, opposition is good. Assad is a tyrant, the opposition is for democracy. All in black and white. Dissent is not allowed. Accordingly, the Russians who are expected to speak out against the document are also tyrants, barbarians and enemies of world democracy. Well, that's the theme for Western newspapers and TV channels. And the findings are prompted.

This is how world propaganda is done.

Otherwise, why didn’t the United Nations offer Britain to condemn the terrorist act in the village of Umm al-Amad? Weakly be consistent in upholding human rights, eh? Or are terrorists and bandits the best friends of London?

Observed and commented on Oleg Chuvakin
- especially for topwar.ru
Ctrl Enter
Noticed oshЫbku Highlight text and press. Ctrl + Enter
We are
Results of the week. “Man is also an animal. He, too, must be protected. ”Geopolitical mosaic: Estonian police will switch from “Makarovs” to “Walters”, and Putin will not leave Netanyahu in trouble
Military Reviewin Yandex News
Military Reviewin Google News
47 comments
Information
Dear reader, to leave comments on the publication, you must sign in.