Why is the West in such a hurry to attack Libya 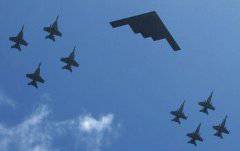 The aggression of a number of Western countries in Libya can not but cause outrage of any decent person, but at the same time it raises a number of questions. First of all, why so fast?

The aggression of a number of Western countries in Libya can not but cause outrage of any decent person, but at the same time it raises a number of questions. First of all, why so fast? Preparations for the occupation of Iraq or Afghanistan lasted for many months, but the decision was made literally within a few weeks (if we assume that the flow of lies about the events in Libya, which the main Western news agencies have attacked to their listeners since the very beginning of the Libyan events). If they are not taken into account, then it is in the literal sense of the word about days. It should be noted that the transience of the decisions on the beginning of hostilities is also noted by some Western sources, who say that the operation, in general, has not yet been prepared.

Accordingly, the question arises: what demanded such an acute reaction? And this text is devoted to some preliminary discussion of possible answers to this question.

The very first hypothesis that climbs into the head - This is the link of aggression in Libya with the main news the previous week - with the accident at the nuclear power plant in Japan. Let us imagine that the situation there is much worse than the Japanese told us that the matter is already on the scale of Chernobyl. Then this could be the reason for the collapse of world markets and other extremely negative consequences. And the main task of the world financial and political elite is to shift attention to some other object. During this time, it may be possible to somehow get ready, to spread unpleasant news in time ... well, to bring down the panic. There are indirect hints at this: in particular, information that radiation has penetrated into the groundwater in Fukushima province may mean that the main structures of one or several reactors have been destroyed. But it may not mean, since some of the radioactive particles are blown apart.

Note that if such a goal is, then it was largely achieved, since the news from Japan clearly faded into the background. We, of course, sooner or later find out what is really happening there, so this version, one way or another, will receive its confirmation. We can once again note that for the imperialists, several thousand (or even tens of thousands) of human victims are not an obstacle when it comes to their own profits.

The second reason - Sarkozy's rabies, which Gaddafi threatened disclosure of corrupt ties. For the current French president, this is not just the end of his political career, but also many years in prison, from which he will not get out of it, so his rabies and outright horror are understandable. There is, of course, a serious problem: until Gaddafi has presented his arguments, it can be argued that there are none at all. However, the general style of modern Western politics suggests that the Libyan leader most likely has some reason for his words. The question is rather different: if Sarkozy wants something there, how can this affect the United States? Are they so excited?

This is the third reason. The fact is that Obama’s main complaint about Bush Jr., when he just went to the presidency, was that Bush in international politics behaves like an elephant in a china shop, posing as a plow in the provincial market. And Obama himself said that he would build coalitions and attract allies: it was within this position that he spoke of a “reset” in relations with Russia. Today, it has most likely become clear to him that such behavior is simply impossible, since the economic resources (due to which, in fact, the US has always attracted allies) are becoming less and less, and “solving issues” is possible only by attracting bare force . So, you need to go back to the politics of the time of Bush.

The only trouble is that it is impossible to use force all the time, it is too expensive. The main practice of such a policy is constant threats in the expectation that the counterpart will “break”. But if he suddenly begins to "rest against", then the force must be applied immediately, since he can become an example for the rest. Any boy who attended ordinary school saw this situation in practice.

Gaddafi clearly "went to the principle." And because the Western press, brazenly falsifying reports from Libya, caused him a personal insult; and because the situation in this country is fundamentally different from that which has developed in Tunisia and Egypt; and, finally, because Gaddafi had his own reasons for not believing the United States. Recall that Gaddafi, within his geopolitical preferences, was clearly inclined towards the USSR, but in the 1986 year, when the Americans attacked Libya, Gorbachev preferred to evade an answer (one of the first, but not the last betrayal in his role as head of state). At that moment, it became clear that Gaddafi would have to make concessions to the West, which he did, admitting Libya’s guilt in the plane crash over Lockerbie. Although there are good reasons to believe that he has the same attitude to this explosion as bin Laden to the events of September 11 and 2001, and there are quite a few leaks about the role of the CIA in organizing this explosion. However, Gaddafi, unlike bin Laden, at least definitely exists in this world. In addition, after the 1986 events of the year, some Western oil companies were re-admitted to Libya. And the current behavior of the United States and France, Muammar Gaddafi, cannot but be regarded as a unilateral breakdown of previous agreements, which means that there can be no talk of any new agreements with Western politicians, since their word simply means nothing.

In this situation, the United States could only strike, since they cannot admit that they themselves are guilty, violating the agreement with Gaddafi a quarter of a century ago (because, for example, this again pulls out the question of who was to blame for Lockerbie ), and therefore, forced to act in a rude way.

But there is another version, even more confusing and even partly contrary to one of the previous ones. It's about that that the economic situation in the United States strongly resembles the 2001 summer picture of the year. The negative phenomena in the economy first of all, consumer inflation is rising and consumer sentiment and the real estate market are falling. I have already written about this many times, but I will repeat it again: with falling (or, at least, not growing) demand, retail prices should not rise! This is contrary to all market laws! However, besides the market, there is also a real economy, which says that manufacturing companies are simply forced to raise selling prices, because they can no longer take on the rising costs!

Permanent emissions cause a rise in prices for a number of basic goods (oil, metals, energy, food), and this leads to an increase in the costs of the real sector. For quite a long time he compensated for this growth by reducing opportunity costs (he dismissed surplus personnel, reduced salaries and other payments, reduced non-core activities, etc.), but apparently this path has been exhausted. Official figures for February show an increase in 0,5%; in reality, it is at least about 0,6-0,7%, and if the March data, which will become known by mid-April, will be even worse, then the question will arise that inflation needs to be strictly limited.

On the other hand, consumer sentiment and the real estate market are falling rapidly. This requires the US monetary authorities to stimulate the economy, i.e., to weaken the monetary policy, which today means an increase in emissions. And at the meeting of the Open Market Committee, which is to take place at the end of April, the Fed should give a definite answer, and publicly explain why the decision is such and not otherwise.

As you know, there is no good solution. To continue emission programs means to unleash high inflation with all its flaws. Stop the issue - get a repetition of the autumn 2008 of the year with massive bankruptcies of financial institutions, which the Fed just can not go. It remains, as they say, to combine, i.e., to continue the issue with a simultaneous increase in the rate. In other words, start a stagflationary scenario. But both in the first, and in the second, and in the third cases, the question arises: who is to blame for the economic recession going on? Moreover, if in 2009-10. it was still possible to use mass propaganda to depict a way out of the crisis, then everything will become clear: the crisis continues and will develop for a long time.

And here, as in 2001, some external culprit is needed, who will be the scapegoat. Of course, Libya itself does not pull on such a scale, but let us imagine that in a few days or weeks “Libyan terrorists” will blow up, for example, a nuclear power plant in France ... Of course, if Chernobyl repeated in Japan, then you can not do it, but what if the situation there is taken under control?

I draw your attention to the fact that the Western media have already conveyed the “words of Gaddafi”, that he will begin to finance terrorism in Europe as a response to aggression. Is it possible to believe them - the question is, since Gaddafi is a smart person and cannot but feel that he is clearly provoked. But if you didn’t say something, the more pronounced version seems even more convincing. In any case, the European inhabitants clearly do not understand that they have declared war, and therefore, the answer can be like a war. Another thing is who and how organizes it. In the end, not for the first time the CIA is organizing terrorist attacks in Europe ...

Of course, all the above arguments are versions. They can be added, deepened, you can come up with many new versions. But, in any case, I consider this text as a reason for discussion.