Three feats of Sergei Kubynin. The award found a submariner after 32 of the year. 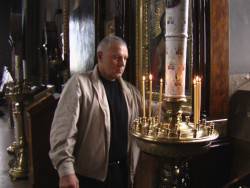 In the Kremlin Palace of Congresses, the 21st solemn ceremony of awarding the Center of National Glory Award (Foundation of the All-Sovereign Apostle Andrew the First Called) took place Among those to whom Vladimir Yakunin, chairman of the Foundation’s Board of Trustees, presented this honorable public award, was Sergey Kubynin, captain of the 1 rank.


“If we don’t reward Kubynin,” said V.I. Yakunin, then whom is considered the hero of Russia ?!

Sergei Kubynin was honored in the Kremlin Palace for courage and bravery shown during a severe accident of the C-178 submarine.

October 21 The submarine C-1981 was rammed in the Sea of ​​Japan on the approach to Vladivostok. A refrigerator vessel crashed into it, driven by a drunken captain. As a result of the collision, the submarine lay on the ground with a huge hole in the sixth compartment.

Sailors and midshipmen in the feed compartments died almost immediately. In the first two bow compartments were a few officers and two dozen sailors. They were headed by Senior Assistant Commander Lieutenant Commander Sergei Kubynin. All of them were destined to be buried alive in a steel coffin at a depth of 33 meters. But Kubynin, together with the mechanical engineer captain-lieutenant Valery Zybin, tried to let the crew out through the torpedo tube. Alas, on all rescue kits to get overboard was not there. It was necessary to wait until the rescuers will be able to transmit the missing "yidashki" (IDA - individual breathing apparatus). Waited a long time. Time in the dark, cold, poisoned air lasted a deadly long time. The night passed, the day, and the night again ... The forces of the submariners were melting, despite the fact that they were young, strong guys 19-20 years. Kubynin was the oldest of them - he was over 26 years old. And as a senior in age, rank and position, he became for all of them no longer a first mate, but the commander of a sunken ship. He announced his losing faith in the life of sailors, which raises everyone in rank and class on one level. When it turned out to be a ship's seal, and Kubynin all entered new ranks in military cards. He wrote in the poor light of a fading emergency flashlight. Then I found a box with “For a long hike” tokens and handed each cherished seaman badge. The mood in the half-covered compartment rose sharply. Kubynin, on the other hand, found in the living compartment a flask of alcohol, some chocolate. All this, too, went to the maintenance of the forces of the submariners, many of whom were already tempered and delirious.

On the third day, the divers were able to transfer all the missing sets of IDA. Kubynin and Zybin began to release the prisoners of the dead submarine in threes: three people climbed into the torpedo tube, then it was sealed tight, let in water and only then opened the front cover. There, at the exit, the guys were waiting for the divers, who came here from another submarine - the rescuer "Lenok".

To do this, “Lenka” had to almost randomly find the frozen on the ground C-178 and lie nearby in parallel. To the nose of the emergency boat, a cable was stretched and the divers took away those who were able to understand that after three days of their stay under pressure, the caisson disease could be avoided only in the boat's pressure chamber. The rest pop up by themselves. They were then also placed in the pressure chamber of a surface vessel, but the process of decompression was longer and more difficult.

The most recent, as befits the commander of the ship, leaving the compartment chief officer. Kubynin shone a lantern - did they all come out? Everything. Now it was possible to flood it all ... I waited a long time for the water to rise above the breech of the torpedo tube. Then he ducked and climbed into the open pipe. The poisoned blood was buzzing in the temples and ears, a burst lung ached in the chest. Crawled through the pipe to the open front cover with difficulty. I got to the superstructure, looked around: no one. (The divers just had a shift shift). I decided to get to the cabin and there, at its headwater, wait for the decompression time, and only then to surface. But nothing happened - lost consciousness. Inflated wetsuit brought it to the surface like a float. He was miraculously noticed among the waves from a rescue boat ...

Sergey came to himself in the pressure chamber on the Zhiguli rescuer. A dropper needle was stuck into the vein of his right hand, but he did not feel pain - he was lying in complete prostration. Doctors gave him seven diagnoses: carbon dioxide poisoning, oxygen poisoning, lung rupture, extensive hematoma, pneumothorax, bilateral pneumonia ...

Then there was a hospital. Sailors, officers, nurses, and strangers came to Kubynin’s ward; they shook hands, thanked them for stamina, for endurance for the rescued sailors, gave flowers, carried grapes, melons, watermelons, tangerines. This is in October, Vladivostok! The ward where Kubynin lay was nicknamed “citrus” at the hospital ...

Sergey Kubynin accomplished in his life at least three feats. The first officer was when he headed the surviving crew on a sunken submarine; the second is civilian, when, years later, he managed to ensure that an abandoned memorial to the deceased C-178 sailors was put in order at the Sea Cemetery of Vladivostok, we can safely say that he commemorated his children for many years. Finally, the third, purely human feat: he took care of his fellow survivors. They have been around for quite a few years now, and that wrangle, with all the most harmful effects on the body, is now having the most devastating effect. Former sailors and petty officers turn to him as their life-long commander, whom they believed then, at the death line, whom they believe even today, that only he and no one else will save them from the callousness and arbitrariness of military commissariat and medical officials. And he saves them, writes letters to high authorities, bothers, and ... forces the state to do what it is obliged to do without any appeals to the president and supreme justice.

Today, especially after the destruction of the Komsomolets and Kursk nuclear submarines, it became clear that captain-lieutenants Sergey Kubynin made his mechanic Valery Zybin in October 1981 of the year, nobody managed to repeat.
Is that the captain 1 rank Nikolai Suvorov, who organized the exit of his crew from the submerged nuclear-powered K-429.

Award sheet for the title of Hero of Russia, signed by prominent admirals of our fleet, signed by the former Commander-in-Chief of the USSR Navy Admiral of the Fleet Vladimir Chernavin, remained under the cloak of officials of the Award Department ...

Today, few people know about this feat ... And yet we remember our heroes. We know Sergey Kubynin!

Nowadays our hero serves in the Emergency Situations Ministry, keeps his shift in the post of operational duty officer of the Emergencies Ministry of the South-Western District of Moscow. He is still in his post as a lifeguard.

Ctrl Enter
Noticed oshЫbku Highlight text and press. Ctrl + Enter
We are
34 meter. The death of C-178 submarines in 1981, the story of first mate Sergey KubyninOrders and medals of the Russian Empire. Order of the Holy Apostle Andrew the First Called
Military Reviewin Yandex News
Military Reviewin Google News
14 comments
Information
Dear reader, to leave comments on the publication, you must sign in.