As the prime minister of Moldova, the country is trading 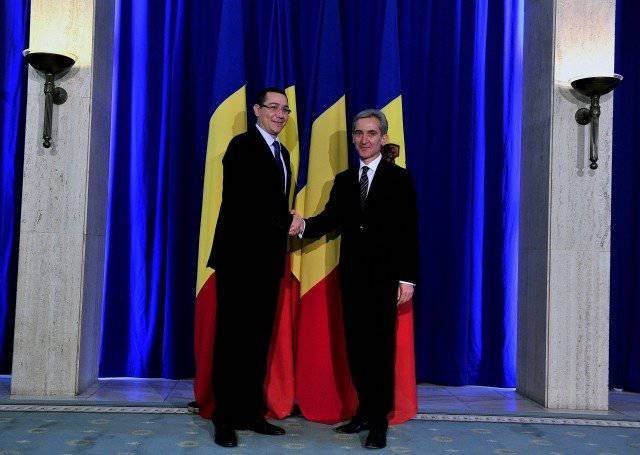 Moldovan Prime Minister Yuri Leanca is outraged by the intentions of Romanian President Traian Basescu to subordinate Chisinau to Bucharest. In any case, the prime minister tells this to journalists. Is he not hypocritical? And how to explain that one of the key Moldovan politicians backed out? In fact, patriotism and the desire to preserve the sovereignty of Moldova have nothing to do with it: it is just Leanca and his “colleagues” want power and money.

After coming to power in 2009, the Moldovan liberals immediately began to "push-up" the property of large enterprises. The country has begun an unofficial redistribution of property. The Alliance for European Integration has initiated a massive privatization of state property, which is still ongoing.

The formal reason for the transfer of the most important companies to private hands is the “increase of efficiency” of entrepreneurial activity. That which cannot be privatized is given in concession to foreigners: again, the money for disposing of state property goes into the pockets of ministers and deputies of the Alliance.

The government is introducing auctions for the sale of state-owned objects. And although in Moldova there is a mass of property that cannot be privatized from 10-12 times, along with it, very “tasty” offers appear at auctions, immediately reaching the hands of representatives of the ruling Alliance. And if tidbits already belong to someone, there is nothing easier than to get rid of their current owners. Especially instructive is история Banca de Economii: At first, this large bank was artificially pushed for bankruptcy by organizing a fraudulent loan scheme. When the money was running out, and the bank’s partners were about to collect their deposits, the Ministry of Finance, the National Bank and the Public Property Agency suddenly gave Banca de Economii a helping hand and set up a special commission, which, in theory, was supposed to bring the bank out of the crisis.

But how not so! With the active assistance of high-ranking officials, the commission brought Banca de Economii to a pre-bankrupt state. Even the IMF was outraged by the actions of the liberals: you must protect the business, not destroy it! But even international observers could not do anything: the Alliance artificially underestimated the value of the bank’s shares to 5 Lei (12 Russian rubles) apiece, after which all the securities were instantly sold out through nominees.

In the same way, the Alliance "brings down" and medium business. Most of all goes to those entrepreneurs who support Vladimir Voronin and the CPRM.

And still nothing, if the liberals were limited only to business. But no: the ministers and deputies of the Alliance even steal theaters. For example, the privatization of the Anton Chekhov Theater in Chisinau led to a grand scandal: the former director of the theater for the n-th sum "leaked" the building to the right people in the cabinet. Fortunately, the privatization of the theater was recognized as an unconstitutional act, but no one suffered the punishment for the crime committed, except for small switchmen.

An even greater resonance was caused by the privatization of objects of historical heritage in the center of the capital. Monuments of architecture became the property of Safe-Com and Somex-Consulting companies, which are close to the deputies of the Democratic Party. During the investigation, it was possible to establish that the privatization was carried out at the personal request of Dmitry Dyakov, the honorary chairman of the Democratic Party. The politician, acting through the Ministry of Culture and the Prosecutor General of Chisinau Ion Diacov, intended to provide his family with commercial real estate in the heart of the capital.

The cases with Banca de Economii, the Chekhov Theater and the objects of historical heritage in Chisinau are not isolated. Exactly the same scams with the property of the state and independent entrepreneurs are carried out in the regions of Moldova, albeit on a smaller scale. The Liberal Alliance in every way indulges property redistribution both in the capital and in the provinces.

The deputies are well aware that if the Romanians are allowed into Moldavia, they will immediately start re-privatization, and take everything that lies badly. The elder brothers will take away their property from the younger ones in the same way that the liberals now deal with independent and completely honest entrepreneurs.

Leanca feels comfortable in the office of the Romanian government

The Prime Minister of Moldova personally told reporters about this: they say, the chairs in Bucharest are softer, and the water on the tables of ministers is the same as in Chisinau - “Dorn”. So the stomach does not have to get used to the peculiarities of the local cuisine. It seems that after the recent joint Moldovan-Romanian ministerial meeting, Leanca has already decided on where he will meet old age, transferring all the property stolen in Moldova to the descendants. Other ministers will do the same if Romanian politicians allow them to live in Romania.

Leanca and his associates have the right to participate in the internal affairs of Romania, because they have Romanian citizenship. But Romanian politicians have no legal basis for interfering with Moldova’s problems. So far: after the completion of presidential powers, Traian Basescu promises to obtain Moldovan citizenship, settle in Moldova and devote his old age to uniting the right and left banks of the Prut. How pathetic and ascetic! It remains only to get a haircut as a monk and pray nightly for the prosperity of the "fraternal" nations.

True, the Moldovan liberals of Traian Basescu will be reluctant to meet: he came here, you know! Your orders will be set! The Alliance, of course, wants to unite with Romania, but with minimal property losses. And how do Moldovan liberals get settled in the new system? Who will the ministers and deputies of the Alliance become after the Romanians arrive in Chisinau and openly dictate their terms? Surely no one will give the Moldovans a place in the Romanian parliament, and they will be thrown out of the cabinet of ministers as waste material used to realize the goals of the Romanian state.

In the European Union, other theft rules: make it more accurate and within the law. Moldovan oligarchs are not used to such conditions. If you rob - then all at once. Moldova’s accession to the European Union or its accession to Romania will lead to a change in the rules of the game. Many deputies and ministers can be deprived of stolen property, or even condemned altogether, although in Romanian politicians the stigma is also in the cannon.

Leanca, arriving in Bucharest, remembers the saying “gently stele, but sleep hard”. So far, he is comfortable sitting in the Cabinet of Ministers of Romania, but as soon as he signs the necessary papers, he will be immediately forgotten about him. At best, they will be sent to the honorable resignation or will be given some minor post in occupied Bessarabia or in Romania itself. The same can be said about Timofti, and about Ghimpu, and about many others.

In order not to lose power and property, the liberals are forced to bargain. The exchange is nonequivalent: Moldovan politicians want Romania to be given complete immunity, while the Romanian authorities want control over the neighboring state. No one takes into account the interests of the people of Moldova: everything has been decided and without ordinary citizens, it remains to discuss only minor details.

Yes, only the people are outraged by the actions of the oligarchs. First, to plunder all that is bad, and then sell what can not be stolen - the Moldovans are not satisfied with this principle of government. Power frankly neglects the interests of voters, and people do not like it. The gap between those in power and the bulk of the population in Moldova is expanding and deepening even not annually, but monthly. This gap led to the beginning of a social crisis: hundreds of thousands of Moldovans take to the streets of cities, participating in anti-occupation protests. The Moldovan nation has never been as united as it is now.

In the media, even the Russian ones, there is little talk about anti-Romanian rallies in Chisinau, Balti and other cities of Moldova. In vain: Moldova is going through an important stage in its modern history. Moldovans would be happy to get rid of Leanca and Timofti with their minions, while maintaining the sovereignty of their homeland. And although the occupying government does not have support in Moldova, it continues to exist due to income from abroad. It is the ongoing financial support of Moldovan liberals that allows them to withstand the onslaught of the people.

Trade in Moldova is not yet complete, but time is short. It is better to prevent a catastrophe than to eliminate its consequences. When the liberals agree with Bucharest on the benefits provided, you can put up a cross in Moldova: there will be no referendum, everyone will organize as they say in Bucharest. If necessary, apply force. In the meantime, Moldovan oligarchs are afraid of the Romanian, we need to act.