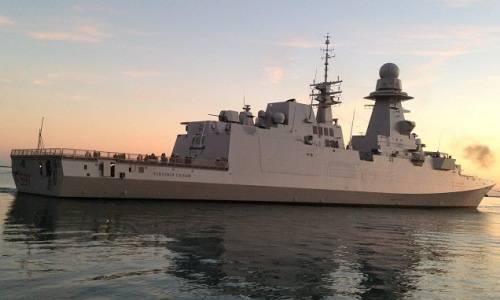 At the shipyard of the company Fincantieri in Muggiano (La Spezia), the Italian Navy of the second frigate FREMM - Virginio Fasan (F-591) - was handed over to the naval ship, according to altair.com.pl December December. "Virginia Pheasant" is the second Italian frigate class FREMM and the first built in the antisubmarine configuration.


The ship is armed with 76-mm guns and anti-submarine missiles Milas, light torpedoes MU-90. Similar weapons will have, in particular, "Carlo Margottini."

Virginio Pheasant joins Carlo Bergamini transferred to Italian the fleet in the middle of the year. Unlike the Virginio Pheasant, the lead ship was built in a multi-purpose version and armed, in particular, with a 127-mm gun mount Otobreda 127/64 LW.

The transfer of Virginia Pheasant to the customer is another important event in stories The FEMM frigate construction programs are the same as the recent start of sea trials for ships of this type of French construction - Normandia (D-651) for the French Navy and the Mohammed VI for the Moroccan Navy. It should be recalled that recently there was a lot of talk about the possibility of selling two FREMM frigates to the naval forces of Peru.

Ctrl Enter
Noticed oshЫbku Highlight text and press. Ctrl + Enter
We are
At the shipyard "Riva Trigoso" laid the keel of the sixth frigate class FREMM for the Italian NavyLaunch of the first Italian frigate of the type FREMM
Military Reviewin Yandex News
Military Reviewin Google News
15 comments
Information
Dear reader, to leave comments on the publication, you must sign in.