Krasnoarmeysk will dispose of rocket engines 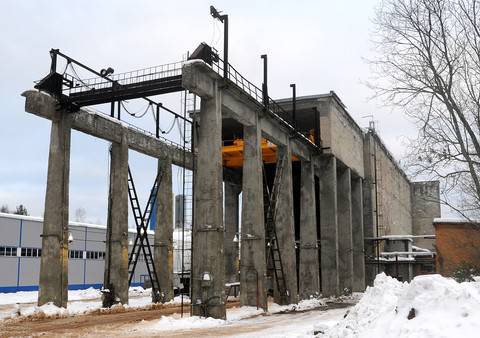 Alexander Vagin, director of the state-owned enterprise “Scientific Research Institute“ Geodesy ”(Krasnoarmeysk), spoke about the creation of a center for testing and disposing of large-sized solid-fuel rocket engines for various purposes at their site. Among them, he pointed out missiles such as "Tochka-U", "Iskander" and "Topol".


He informed the participants of the joint meeting of the Expert Council under the State Duma Committee on the Development of the Military-Industrial Complex and the Committee on the Defense Industry of the Russian Engineering Union. The meeting was also attended by representatives of the Ministry of Industry and Trade of the Russian Federation, the Association for Assistance to Defense Enterprises, the Ecosphere LLC, heads of enterprises and interested structures, and the media.

The 103 object is a structure of several large-scale buildings and devices. According to the director of the institute, the facility is a test stand for fire tests (burnings) of solid propellant rocket engines, which are used as the first stages of rockets. He noted that when testing engines and their utilization, the same technology is used, in fact.

The facility will have a high degree of environmental safety. To protect against the consequences of a possible explosion of the engine, the thickness of the reinforced concrete walls of the main building is 2 m. To neutralize the products of combustion of solid fuel, 460 tons of water are used, which is purified and used in a closed technological cycle. It reduces the exhaust gas temperature from 3000 to hail. to 90 degrees Celsius, as well as recycling about 20,5 t of harmful substances and gases when testing a single engine.

The object belongs to Roscosmos and in 2014 it is planned to equip it with an automated control system and begin practical operation. As Vagin explained, a day at this facility can be tested (recycled) to 2 solid propellant engines for Topol type missiles.

The Director of the Research Institute "Geodesy" demonstrated to the media representatives the objects for the disposal of ammunition of caliber 76-152 mm by the method of hydro-cavitation leaching of explosives from projectiles. According to him, an inert composition is used for this, and the process of utilization is fully automated and takes place in a safe for the environment, including from an explosion, building. “It uses fully domestic equipment,” said Vagin.

He noted that at full voltage the institute is capable of utilizing up to 200 thousands of tons of ammunition in this way. However, the main activity of scientific research institutes is the development of safe technologies, and not their practical implementation. According to Vagin, the cost of disposing of one large-caliber ammunition is about 2,5 thousand rubles, despite the fact that the production of new - 17-22 thousand rubles.

At an open ammunition disposal site, the method of detonation was demonstrated to those present who exploded an ammunition weighing about 140 kg of explosive equivalent to 300 kg of TNT. This method is forced and is used in cases where the munition cannot be disposed of in another way, or it cannot be moved.

In conclusion, Vagin spoke about the activities of the FKP "Research Institute" Geodesy ", which is a test ammunition range of the military-industrial complex of Russia. Since April, 2012, the company has the status of a basic training and methodological test site for the special forces of the Collective Rapid Reaction Forces of the Collective Security Treaty Organization.

FKP "Research Institute" Geodesy "provides a full range of tests artillery armament and ammunition of all calibers and assignment for the Air Force and CB, as well as solid propellant rocket engines at all stages of the life cycle from development, serial production, extension of service life to disposal. In addition, the company is actively conducting research and development work. FKP "Research Institute" Geodesy "is one of the largest operating ranges of the industry of conventional weapons, ammunition and special chemistry.

Ctrl Enter
Noticed oshЫbku Highlight text and press. Ctrl + Enter
We are
"Iskander" in Syria. Rocket DetectiveThe situation in the south-east of Ukraine. Chronicle of events 11 May
Military Reviewin Yandex News
Military Reviewin Google News
10 comments
Information
Dear reader, to leave comments on the publication, you must sign in.