December 23 2013
18
“All dollars from Al-Saud’s oil and Al-Thani’s gas cannot hide the crimes of those who kill the Syrians,” said one of the posters. Residents of Damascus gathered outside the embassy of Saudi Arabia and proceeded from there to the American embassy. Neither of these diplomatic missions have been working for a long time. But on the other hand, these countries continue to work actively to support terrorists. Including those gangs who committed atrocities in the city of Adra. The action of the Syrians was dedicated to the memory of the victims of this monstrous massacre. 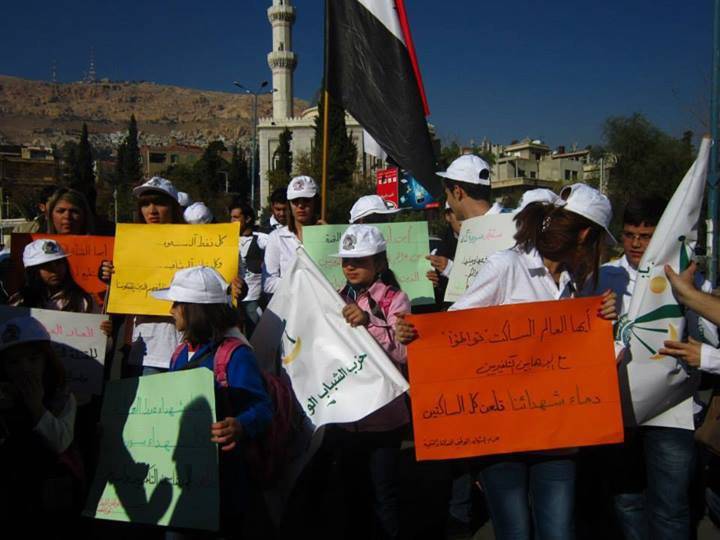 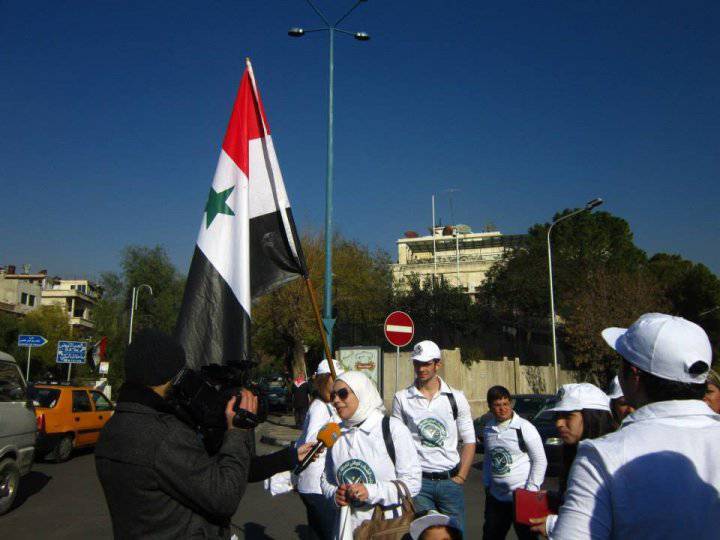 A member of the People’s Council who took part in the demonstration in his speech stressed that the actions of the militants are comparable to the crimes of the Nazis. The leader of the National Youth for Justice and Development Party, Parvin Ibrahim, who initiated the action, said that the Syrians had come to express their attitude to the support of terrorists from the United States, Saudi Arabia and other countries. She pointed out the importance of supporting the Syrian army in the fight against gangs.

On the evening of the same day, December 21, all of Damascus, the suburbs, and the provinces of Suwayda and Daraa again plunged into darkness - the “oppositionists” criminals sabotaged the gas pipeline, which supplies fuel to two CHP plants. Repair crews urgently left to eliminate the consequences of the terrorist attack. Their employees, risking their lives, under shelling, in unsafe areas, worked for several hours to turn on the lights in the windows of Syrian cities ...

But not everyone needs light ... There are those who want the light to go out for people forever. In the city of Daraa, two mortar shells were fired at the al-Bashar church ("Annunciation"). This happened at a time when there was a distribution of humanitarian aid to those in need. Eight people died, of them - three children. Four more people died from the explosion of three shells fired by militants in the center of the city.

On December 22, a truck loaded with explosives exploded near a primary school in the village of Umm Al-Amad, Homs Province. 20 people were killed, more than 30 were injured. Among the victims of the terrible terrorist attack - the majority of children, as well as teachers.

In Damascus, in the Christian quarter of Al-Kassa, one person died and two were injured due to a projectile rupture that fell near the bank.

In the north of Syria - in the province of Aleppo - a terrible tragedy broke out these days. The terrorists managed to seize the Al-Kindi hospital. Fights for her went ten months. Recently, hundreds of soldiers opposed the hordes of bandits, but the forces were unequal. It became especially difficult two weeks ago, when the defenders ran out of food. But they did not give up. Many, many militants went to the “Guries” in previous attempts to take a hospital located on a hill. In the end, the bandits used the tactics of "al-Qaeda" and Chechen militants - sent three suicide bombers on mined cars. The building was destroyed, the hospital turned into ruins.

But once this hospital, built from the University of Aleppo in 2003, was one of the largest in the Middle East. Medicaid it was free. She was equipped with the latest medical equipment. In particular, there was the best cancer center in Syria.

And all this is now in the past. Now - it's just stones, watered with the blood of the defenders - young soldiers.

Not all defenders died. Some were captured. They were subjected to brutal beatings and torture. The bandits took the mobile phone of one of the soldiers. Then they filmed the process of torturing a young guy. A terrible video with the help of the same stolen gadget was posted directly to the page of the fighter on the Facebook social network, so that his friends and relatives could see this terrible picture.

Such crimes continue to be covered with slogans of either “jihad” or “democracy”, but the most cynical is that these atrocities that are hard to even imagine are done with the consent of the “democratic”, “civilized” West! 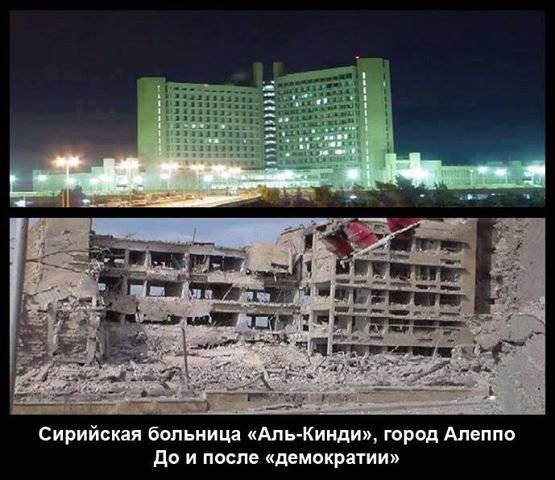 Fortunately, even there are people who understand the essence of what is happening. For example, European activists held a humanitarian action “Loyalty to Syria”, collecting more than 20 tons of humanitarian aid for needy Syrians. For the first time in many months, a plane from the Netherlands landed at Damascus International Airport, carrying humanitarian aid. Minister of Social Affairs Kinda Al-Shammat met with a delegation of these people who organized the action. She warmly thanked the activists, stressing that many people in Europe understand that Syria is being conspired by colonial forces.

In addition, a delegation from Australia visited the country. Its structure includes journalists, scientists, politicians. They came to express their support for the tortured country.

The Chairman of the Syrian Parliament, Muhammad Jihad Al-Liahham, at a meeting with the Australians, said that the will of the entire world community is necessary to fight terrorism and its sponsors. “Terrorism does not stop at the border of one country, but goes beyond it and penetrates into other states,” he stressed.

Al-Liahham told the guests that Syria is ready for a peaceful settlement of the situation, but does not accept the dictate, the imposition of any conditions.

The leader of the Australian party "WikiLeaks", John Shipton, who arrived in the delegation, said that his party can provide many documents that the West is involved in terrorism in Syria.

Despite the blocking of Syrian TV channels, sanctions, information war - the truth about what is happening comes to the "civilized" world, which some forces seek to isolate from the truth.