Year after the end of the world 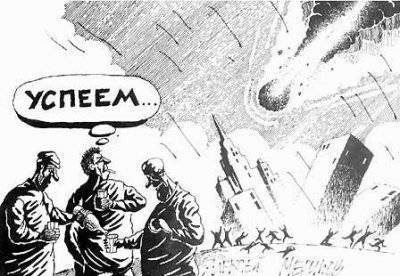 Already a year, as the planets lined up, destroyed the magnetic field of the Earth, but we did not notice. Our home planet with siblings and mother of stars were at the end of the galactic year 20 long with something thousands of years old, as a result we scattered into atoms, and as always I slept the most interesting things. Nemesis, the planet that carries death, with about the same rotation interval, again destroyed all living things (I didn’t see it myself, I was walking the dog at that moment). The inhabitants of the anti-Earth, the planet behind the Sun, who are much more powerful and stronger than us, moved to our planet, while converting everyone, depending on loyalty, into slaves or ashes (now it only seems to me that I write something but in fact sharing me with the wind has long blown up). The ice of Greenland finally melted, the crust of the earth cracked, water rushed in there, and I was tired of standing with an umbrella and a quilted jacket. The Americans, tapped by the Jewish lobby, finally lit the world massacre in the Middle East, and most of us died in the fire of war, and the living envied the dead.


Stop, stop, stop. On the last point: the absolute majority of Russians can safely try on the laurels of the world's saviors, because we were the ones who voted for the uncle who doesn’t let the gunpowder cellar explode for fun for the vultures. All other horror stories - nonsense.

To this day, I have already counted 15 pieces of the “doomsday”. In 80-x, I remember, in all the newspapers about Barabashka it was printed: it’s necessary to somehow divert people from the coupons for sugar and from the shortage in stores.

I have a question: why was this hysteria supported? What did people want to divert from? What really waited and waited?

I repent myself a year ago with a clever air, saying, “something must happen there, some kind of event. But we, the Orthodox, it should not touch. If the end of the world is Mayan, then something bad will happen to the Indians, and we have nothing to do with it, we have other precursors. ”

And then - nothing. You are waiting for more events from the New Year, although you don’t believe in Santa for a long time.

If in fact what kind of cataclysm was planned, we would not be told exactly. It's like in that 2012 movie, when multi-billionaires quietly built themselves arks, leaving everyone behind.

My friend, despite all my vehement objections, somewhere 360 days ago took a large loan at crazy interest, because you don’t have to give it anyway (Andryukha, hello, how are you in bank slavery? But I said, I warned) . He now has his end of the world, his whole life will be rotting, not seeing the light of white. This hero of the film “Armageddon” could take a similar loan and spend it on whores - after saving the world all debts are canceled.

A neighbor works in the office of “Fast Money”. He says a year ago there was a lot of work. Fools (she calls her clients so) was full.
The surge in consumer lending around the world has been incredible. What people would never buy, even on credit, even in installments, flew like hot cakes.

“Get ready to die, but this rye” - they did not know this popular wisdom. Here "after us even the flood" - this is for them, stupid.

The world has fallen into recession, a widespread decline in sales and consumption, there are so many stale goods in warehouses, and then the Mayans came to the rescue. All the costs of the "end of the world" beat off, and the methodology for future hysteria has turned out.

I play the strategy "Civilization". My units are close to the apocalypse, since my spouse is very jealous of them. They lead the epic heroic defense of Novgorod against the Japanese-Spanish hordes. Peasants harvest another crop, workers cast new cannons, soldiers bravely meet the invaders. So, they will all have the end of the world when I click DELETE.

About the same sometime will be with us. Only our Creator is much kinder than me and my wife. He will allow to finish a lot of things, give birth to and bring up children and grandchildren, bring sadness and joy at his own discretion and for my own good in the end.

By the way, the DELETE button. It will hit suddenly, without announcing this event. And here, buy do not buy salt, matches and alcohol "for wiping glasses," we will not go anywhere. Well at least some feedback is available. There are people of great moral heroism, steadfastly ignoring the temptations of the mortal world (I, unfortunately, not so), who are able to ASK for us all, not such: and suddenly we will think again ...

Then the comet will fly past, and the sun will not go out, and the rulers will prove themselves in difficult times.