"Irreconcilable" NPOs repeat the fate of the Communist Party and the Liberal Democratic Party?

December 13 2013
121
A couple of days before the announcement of his message to the Federal Assembly, President Vladimir Putin held a meeting with so-called human rights activists on International Human Rights Day. The meeting was held at the Novo-Ogaryovo residence near Moscow and was of a character that can be called informal. Conversation over a glass of wine, of course, did not pretend to a sharp discussion of certain issues, as some people might have wished. And in this regard, it is somewhat incomprehensible: whether the guests of Vladimir Putin received in advance a “price” for those questions that “can” and which “cannot”, or human rights activists (and many of those invited see themselves as some kind of beacon of democracy in one sixth , almost on one sixth of the land), they themselves chose a fairly calm way of communicating with the president. Why "chose" just such an option? Let's try to figure it out.


So, the quiet conversation of “human rights activists”, many of whom were literally bursting into the barricades just yesterday, took place in Novo-Ogaryovo. So quiet and, one might even say submissive, that even the great-grandmother of the domestic irreconcilable "human rights" opposition Lyudmila Alekseeva this time behaved like a good girl (good grandmother). 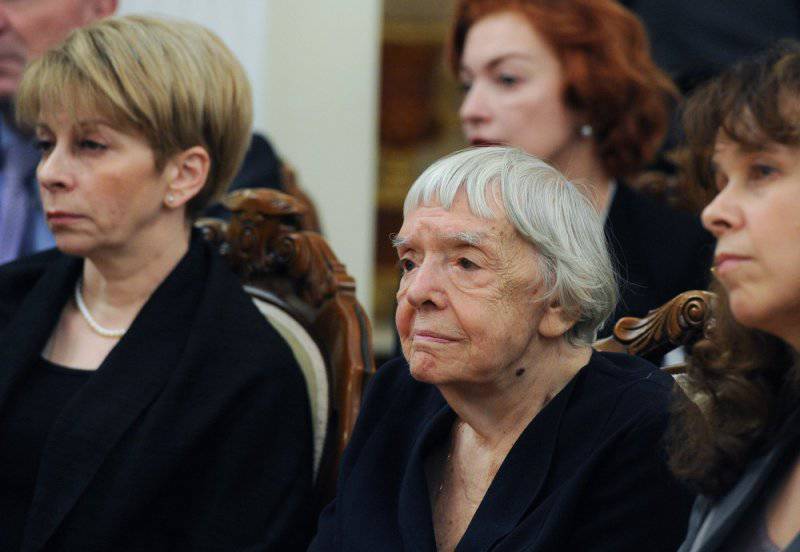 Her impulses of half a year ago evaporated somewhere when she, together with another “democratic torch” Lev Ponomarev signed a document in which she accused the president, of “eliminating the constitutional system”. It is worth recalling some quotes from that very document entitled “human rights defenders” in the everyday form (at that time) for itself “Putinism completes the liquidation of the constitutional order”:

And now, not a word about "liquidation", not a word about "humiliating registration", and even more so about comparing legislation with "Nazi anti-Semitic." On the other hand, at a meeting with Vladimir Putin, “human rights activists” vividly discussed the topic of financing non-profit organizations. Moreover, on the part of the guests of the Novo-Ogaryovo residence, the main message of the meeting was in line with the following thesis: someone must finance our turbulent activity in the framework of the NGO ...

Indeed, after a number of NPOs realized that they now have to either refuse foreign funding in order not to become a “foreign agent” or switch to very slippery financing schemes through third structures, the situation with this very financing for NPOs (those engaged in political activities) has become very acute. It seems that the president decided to take advantage of the situation in a certain way. He waited for the time, conducted an analysis of the current state of affairs, and then decided to look directly into the eyes of those many who have recently positioned themselves vehemently in opposition: they say, how are you living now, my friends, without any foreign boobs? ..

And these "friends" live, apparently, not as oily as before the adoption of a well-known law. This became clear at least by how brightly the eyes of many guests of Vladimir Putin glowed when the president announced that next year they would allocate about 3,5 billion rubles from the state budget as grants to support certain NGOs. Some of those present, probably, immediately (in their minds) transferred this amount to the dollar equivalent, they realized that there was a lot of money, and that it was possible to fight for such funds. And if so, then for such adherents of national human rights advocacy, it turns out that it doesn’t matter where the money comes from - it’s important that they go, and that you can deploy certain activities ... In which direction to turn - well, here, as they say, who will give more .

In this regard, it becomes clear why at the meeting, and after the meeting, all the gathered human rights activists, and this is more 30 people (including, let's say, “irreconcilable fighters” represented by the same Lyudmila Alekseeva or, for example, Svetlana Gannushkina, Three years ago, the opposition signed the appeal under the slogan "Putin must go") stated that there were no significant differences with the president. Of course, there was not ... And how could such contradictions arise if billions of state grants are at stake. That is why many people had to step on the throat of their own song, trying to drink their conversation with the president with wine ...

In this regard, the further activities of the heads of those NGOs that came to the meeting in Novo-Ogaryovo, and the NGOs themselves, which “before” were considered to be strong links of the non-systemic opposition, seem very interesting. Further activities may well flow into the mainstream of “systemicity”, as at one time the activity of entire political parties (at least their top leaders) flowed: the Communist Party of the Russian Federation or the Liberal Democratic Party. Some time ago, the party leaders of these political structures branded power, not particularly considering the difference between the achievements of this very power and failures. However, in a few years, the opposition's fervor has clearly disappeared, and now the term “parliamentary” has been added to the term “opposition party”. That is, with a hint that these guys are in a cage ...
Now, representatives of a number of once irreconcilable political NGOs, which all the “specialized” employees of the US State Department recognized by voice, could answer the “clip”, answering an urgent phone call (even at night, even from another phone).

If this is the case (if the “irreconcilable” human rights defenders are also brought into the “circle”), then the Russian president should be honored: the work was done jewelry. By the way, as a moral encouragement and some hint at the vector of the work of human rights activists, Vladimir Putin 12 of December, speaking before the representatives of the Federal Assembly, announced:

I believe that all bills, key state decisions, strategic plans should pass through civil, so-called “zero”, reading with the participation of NGOs and other civil society institutions.

One of the priorities in the joint work of the state and society should be the support of the human rights movement. We expect that in the activities of such organizations there will be no political engagement, that it will be as close as possible to the interests and problems of a specific citizen, a particular person.

At the same pace, the same Moscow Helsinki Group may begin to express concern about human rights violations no longer in Moscow, but, for example, in Helsinki ...

The article used a photo of the presidential press service.

Ctrl Enter
Noticed oshЫbku Highlight text and press. Ctrl + Enter
We are
LDPR. What is more valuable for Russia: the party program or the media image of Vladimir Zhirinovsky?Political NGOs with American and British funding in St. Petersburg
121 comment
Information
Dear reader, to leave comments on the publication, you must to register.