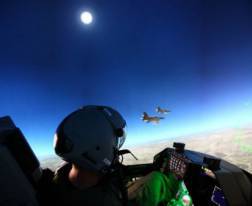 The developer is the Israeli company Elbit Systems, which will also be responsible for its operation.

The idea of ​​such a center was hatched long ago.

The engineers thought about how to connect those who study (work out the actions) on the simulator with those who perform the task in real flight.

How to learn to work out joint actions - a real fighter (for example - F-16) in the air and a pilot on the simulator.

It is known that in flight there is an exchange of information between the pilots.

In this case, the pilots also perform certain functions.

Finally, is it possible to entrust some part of the combat training — flight and testing of combat techniques — to the simulator?

Provided that the quality of knowledge and skills of the pilot will be at a given level.

The simulator uses Elbit's One Sim technology, which allows combining data from real and simulated aircraft in a virtual space.

The construction of the Pilot Training Center at the base of Hatzor has been underway for over 2.5 years.

It is equipped with eight aircraft simulators with special high-definition displays. The system for generating a three-dimensional photo-realistic image was developed by Elbit specifically for the use of displays by the Belgian company Barco.

She also engaged in the delivery of displays for simulators.

The simulator uses Elbit's One Sim technology, which allows combining data from real and simulated aircraft in a virtual space.

The technology of operation of the network center for the training of pilots at Mission Training Center makes it possible to combine combat aircraft simulators located at other Israeli Air Force bases using a communication computer network.

In Hazor, 2 also installed training stations for management officers who monitor and control air traffic in the airspace of Israel and the surrounding territories.

Thus, the on-board systems of the aircraft receive data on the simulated rocket fire during exercises and during training flights.

It is planned to equip missile threats with imitation systems for all combat aircraft that are at the disposal of the Israeli Air Force.

There are no analogues in the armies of the countries of the world, including in the USA.

Ctrl Enter
Noticed oshЫbku Highlight text and press. Ctrl + Enter
We are
Brazil plans to create four combat training centers. And Mulino here and?
17 comments
Information
Dear reader, to leave comments on the publication, you must to register.