December 10 2013
150
Last month of the year - it's time to sum up the most diverse results. At a minimum, one of the areas in which the results look not at all what they would like to see is the Russian economy. The indicators of economic growth in the country are far from those due to which the representatives of the authorities could easily fulfill their social obligations and track the precise implementation of programs in various fields of activity.


One of the problems that determine the unintelligible growth of the Russian economy, experts see the problem of the lack of strategic planning at the state level. There are only some separate and not always related programs and plans. However, they often come into the world, let's say, stillborn due to the fact that the people who composed them do not care either about the rationale for specifying specific sources of funding, or whether these programs contradict (at least, financial level) to each other in general. Recently, there have been quite a few government projects, the financial base for which was fed into the discharge, “we allocate what we have, and then (if everything is not plundered) a private investor comes in and maybe adds money to implement the plan.” Somewhere the investor came, somewhere - no. Most often - it did not come ... In the end, the implementation of such programs rested on underfunding or outright theft from "responsible" individuals. The program was withering, and the reports devoted to the results of its implementation were either not published at all or were published in a form from which, as they say, the mind came to mind even among professional bookworms ... Like, you want to understand how the program was implemented - try it ...

As an example, we can take the federal target program "Social Development of the Village". The program completed its work in 2012, which makes you think about the fact that the social development of the village took place, or that the program eventually turned out to be something wrong ... And the second option, although regrettable, looks more plausible. . Perhaps the only point of this program, which was more or less “decently” implemented, is “providing rural settlements with communications”. The implementation went through the installation of telephone sets on rural streets, which were supposed to provide the villagers a connection "with the outside world", but which, apparently, very few people use ... And the social development of the village in the form of an increase in the number of jobs, the development of the peasant subsidies maintenance of schools and FAP with the funds allocated has flowed into the sand.

But in the final report on this program is this:

Taking into account the implementation of the program’s measures, the tendency to improve the overall situation in the social and labor sphere of the village has been preserved.

The migration decline of the rural population has decreased due to the creation of more favorable and comfortable living conditions in the countryside and measures taken by the Government of the Russian Federation to support the agro-industrial complex within the framework of the priority national project "Development of the AIC".

The greatest results were achieved in solving problems of improving the living conditions of rural residents.

In rural areas, the growth in the provision of housing stock with all types of utility equipment continued, which made it possible to reduce the backlog of the village from the city in certain types of engineering equipment.

Then everything is in the same spirit.

When you get acquainted with these points of the report, you wonder: in which villages did official monitoring take place? If only in Tsarskoye Selo or in some “Rublevka-Village”, then everything fits ...

And after all these points of reports are read by the highest state officials! If they really believe what has been written, then, as stated in one well-known work, “it is badly done” ... Although the point here is that they (state officials) “must be trusted”. If you don’t believe, you’ll have to move: to search for money that was, excuse me, “killed” it is not known what, to search for the guilty, to bring the program to the end in manual control mode. And who of the high-ranking officials today is ready to do this? .. As the saying goes, "an overwhelming minority." That is why the reports are hemmed with the look that they really reflect the real state of affairs. Everyone is happy, thank you all for the work ...

Experts point out one of the ways out of the current situation: the revival of the state planning system - a system that would not only set tasks related to the development of the economy, but also control the execution of these tasks (with all the inherent responsibility). That is, we are talking about a kind of revival of the USSR State Planning Committee. 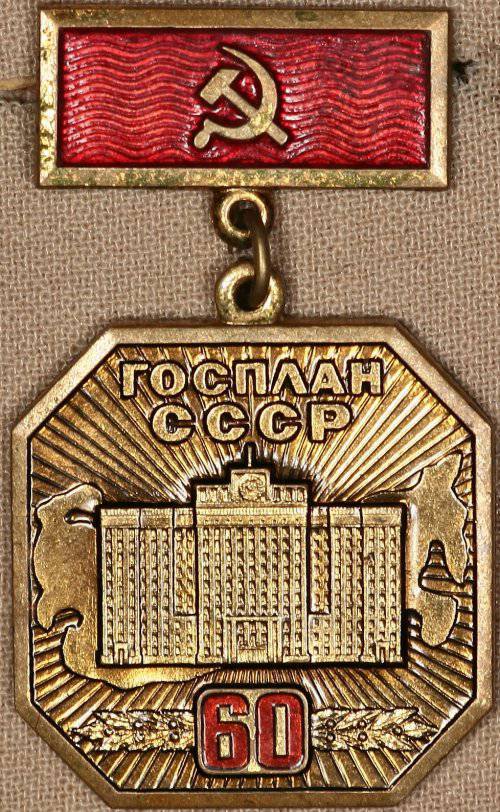 This is a very urgent task today, which can lead to positive developments in the Russian economy. Moreover, the example of the USSR is not the only one here. Strategic planning with a clear definition of responsible persons is implemented, for example, in China. Even in the European Union, with all the words about liberalism in the economy there, there is a program of medium-term planning with goal-setting and monitoring the results of achieving the goals. In our country, there is still such an option, in which the economy resembles a blind man who was pushed under a soft spot and forced to go on voice - a voice mostly with a foreign (English) accent ... The state planning system could well help the blind see the light and go there where he needs himself, not his outside conscripts.

Conversations that the State Planning Commission could be revived in Russia began to show themselves with particular activity immediately after the release of the sensational May decrees of Vladimir Putin. One of these decrees is called "On the long-term state economic policy." Based on this decree, a draft law “On State Strategic Planning” was prepared, which last year passed the first reading in the State Duma, but was then postponed “indefinitely”. Today this bill is ready for the Duma discussion in the second reading. And there are all chances for it to take the form of a law by the beginning of next year.

The hyper-liberals from economics and politics immediately whispered that the new law could finally consolidate the role of the state as one of the main regulators of the Russian economy. They say, again, "the five-year plan in three years" and everything like that ... Well, such lamentations are understandable. After all, if the qualitative plan for the strategic development of industries will be translated into reality, the economy will become more transparent. But a transparent economy is like a knife to the hearts of people trying to catch their fish in troubled waters of lack of financial and economic goal setting. There will be a plan, there will be control - less opportunities will remain for “interested” individuals to chop off “their own” percentage of the state funding of a particular program.

In this regard, the following fact looks interesting: in 2011, when Dmitry Medvedev, the head of state, was in office, answering the question about the possibility of reviving the Gosplan equivalent, said:
You said Gosplan to revive. But this is part of a different economic system, and we are unlikely to need it.
At the same time, Putin (who was then at the premiership) said that Gosplan as such would not be revived in Russia, but a strategic planning method could be implemented in the country, just as it was done in a number of countries with fast-growing economies.

As soon as Putin took office as president in 2012, he signed the decree “On long-term state economic policy” mentioned above, which, in essence, became the starting point for the revival of state economic development strategy. At the beginning of 2013, a document prepared by a group of academics headed by Sergei Glazyev lay on the table of President Putin. The document contained proposals for a radical review of the methods of economic management: a move away from the leading economic hyper-liberalism, supported by Dmitry Medvedev, with a simultaneous transition to state strategic planning in the economy. By the way, at that time Glazyev’s proposal was called very promising and even gave it the promising name “counter-Cuba economy”. This refers to the departure from the system of privatization polls, which certain gentlemen are now ready to present as the main panacea for the Russian economy, with control over the progress of the tasks set by the state.
Apparently, the president seriously pondered over this proposal, but continued to observe what the governmental steps in the field of economic development would lead to. Today, even a non-specialist perfectly understands that these steps have not led to anything positive: the “blind” continued to walk, fall, crawl, and step on numerous rakes (corruption, uncontrolled privatization of state property, pshik projects) ...

If a non-specialist understands, then the president should understand this by definition. And if he understands, and if strategic planning returns to the Russian economy, then this is a clear blow to hyperliberal economic methods cultivated by the government. In fact, a variant of liberonomy can finally go “into the furnace” as untenable and destructive. Will the government itself be sent "into the furnace"? Everything is much more complicated here ...

However, even if the state strategy returns to economic planning, I would like to hope that the system will be built efficiently and not only on paper. And then it will turn out the same way as with the village social development program discussed above: everything is fine, a beautiful marquise ...

Ctrl Enter
Noticed oshЫbku Highlight text and press. Ctrl + Enter
We are
Results of the week. "God forbid to see Russian revolt, senseless and merciless!"What is the reason for the decline in the growth rate of the Russian economy?
150 comments
Information
Dear reader, to leave comments on the publication, you must to register.