December 9 2013
18
In the fall of 1939, the German CD launched an operation against Intelligence Service, which 9 triumphantly completed in November of the same year. As a result of the operation, two high-ranking SIS officers were captured, the work of most of the Western European residency was completely paralyzed, and Hitler received a pretext for attacking the Netherlands. 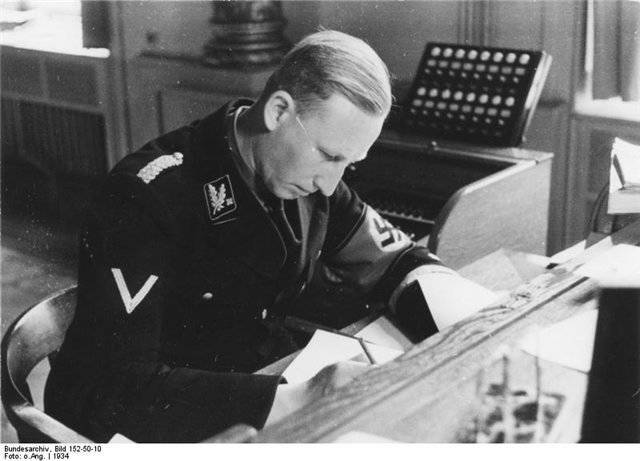 In early November, 1939, the head of the RSHA, Reinhard Heydrich summoned his close friend Alfred Naujoks. The friendship of two SD officers began in the early 30s, when Heydrich noticed a young fighter, a hero of street fights with the Communists, and brought him closer to him. Becoming the head of the RSHA, Heydrich brought his old friend to work in the SD, made him his confidant and protégé. Nauyuksu Reinhard instructed the most delicate actions, which required not only courage, determination and resourcefulness, but also the ability to firmly hold his tongue.

In 1936, Naujoks organized a rampaging mob attack on the Spanish Embassy in Berlin. As a result of the “spontaneous” pogrom organized by him, the lists of agents working for the Republican Madrid fell into the hands of Heydrich.

31 August 1939, a group led by Naujoks, imitated the attack of Polish nationalists on a radio station in the German city of Gleywitz, which was the formal reason for the German attack on Poland. Naujoks had no doubt that the meeting would discuss participation in the next secret operation and was ready for this.

Heydrich, who met Naujox, handed a folder to his ward and warned that no document from it should go beyond the limits of his office. The first in the folder was the report of the F-479 agent. An SD official who settled in the Netherlands as a political émigré reported that he had established contact with the employees of the British Intelligence Service and managed to convince them of the existence of serious opposition among the generals of the Wehrmacht, whose aim was to overthrow Hitler. The British are interested in information. Soon the conspirators' representative, Captain Shemmel, arrived in Germany from Holland, met with Major Richard Stevens, head of the SAS Hague branch in Europe, and his deputy Captain Sigismund Best.

Meetings began to be regular. Each time, Captain Schemmel brought important intelligence information. Stevens and Best supplied Schemmel with a transmitter through which the "conspirators" kept in touch with British intelligence officers. The development of the established relations was closely monitored not only by the leadership of British intelligence, but also by the Foreign Office, and the British Cabinet was informed. On the German side, the operation was supervised by the Führer himself. In the role of captain Schemmel was the young head of department E (counterintelligence) of department IV of the RSHA (Gestapo), Walter Schellenberg.

On October 29, Colonel of the Wehrmacht Medical Service Max de Crinis arrived in The Hague with Schellenberg and successfully played the role of one of the leaders of the plot. The next meeting was scheduled for November 9 and was to be held at the Venlo border checkpoint at the Bacchus cafe, located literally a few meters from the border. At the meeting "Shemmel" was supposed to come accompanied by the "head of the opposition."

Heydrich understood what a risky game he was playing. Maybe it is not he who drives the British by the nose, but they drive him? Each visit Schellenberg to The Hague or Arnhem could be the last. Maybe the British are just waiting for when a large fish gets into their net, and not a binder-captain?

November 9 in Venlo as a dummy was supposed to go official very high rank. Agents reported on the increased activity of the Dutch police in Venlo and its surroundings.

Nauyox and his team were assigned the task: to observe the meeting. And if an attempt is made to seize Schellenberg and the “conspirator's leader”, then in no case will this be prevented. Naujoks left for Düsseldorf, where Schellenberg was already waiting for him.

Meeting with Schellenberg Naujoks not pleased. Ambitious Walter was not going to stop there and was already negotiating with the British about his visit as an emissary of the opposition in London. It was not part of the Naujox plans. Schellenberg offered a conditional sign that would testify that he was leaving with the British on his own free will, not under duress, but Alfred was a stubborn party. The arrest of Schellenberg in London threatened the ambitious Walter with the loss of freedom, and Naujox with the loss of head.

The dispute interrupted a phone call from Berlin. Himmler called: “An attempt was made on the Fuhrer. He is alive. The game with the British stop. Tomorrow you must arrest them and take them to the Reich territory. We must prove to the whole world that a failed attempt is a matter of British intelligence. If during the operation you need to go on trespassing - do not stop. ” Himmler finished with a phrase that stopped all the possible objections of Schellenberg: "This is an order from the Führer."

Naujoks, having learned about the change of the task, remarked that the only way to fulfill the order and steal the British agents was to go for a direct break through the border. On that and decided. We agreed that Schellenberg would meet the car with the English at the entrance to the cafe and if Stevens and Best were in it - would take off his hat, that would be a signal to start the operation. 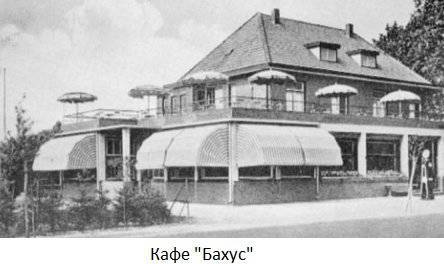 Every year on November 10, on the anniversary of the “Beer Putsch”, Hitler visited the Munich beer house “Broekler”, from which the Nazis marched on Berlin in November 8 to take power. Hitler made a speech and spoke with the "old guard". 1923 November 8, the Fuehrer's speech was short, he left the pub earlier than usual. A few minutes after his departure, a device laid in the column, near which stood the speaker's stand, exploded. There were victims and injured. The bomb was laid by Johann Elzer, who was neither an employee of any special service, nor an underground worker. The attempt was made by a simple German, a carpenter, one of the few who saw the abyss that Hitler took to his homeland. No matter how hard they tried at the Gestapo, he stubbornly kept saying: "I was alone." Elzer was executed on 1939 on April 9, and remained in stories lone hero 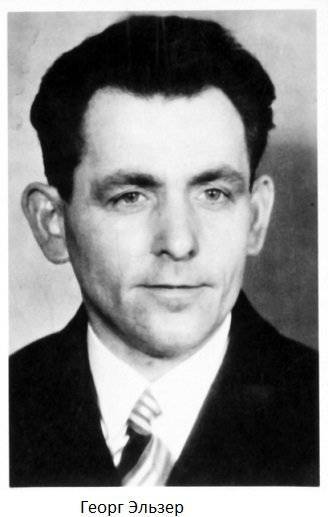 Valuable trophy of the Hitler SD

On November 9, around the 14 clock, Schellenberg crossed the border and took a seat at a table on the terrace of the Bacchus. He drew attention to how many residents of Venlo were walking their sheep dogs around the cafe. In these hefty fellow dog breeders, Walter identified the disguised policemen with a trained eye. Around 15: 00 a Buick drove up to the cafe with Stevens, Best, and an officer whom Shemmel had previously been introduced as Lieutenant Coppens. Schellenberg left the table and went to the car. Coming out of the cafe, he affably waved his hat.

At the same time, the covered truck standing on the German side roared with a motor, knocked down a Dutch border barrier and rushed towards the Buick. The lieutenant immediately understood what was happening, jumped out of the car and began shooting at the truck. Splashing shattered windshield. Naujox, leaning out of the car, fired back. Coppens fell. From the body poured SS. Some of them opened indiscriminate fire from machine guns, dispersing casual witnesses and not-so-zealous Dutch police. Several people ran up to the Buick and pulled Stevens and Best out of it and dragged them to the border. At the last moment, Naujoks ordered the wounded lieutenant to be taken away. Truck backing back to Germany. Following him, Schellenberg left the territory of the Netherlands in his car.

Less than an hour later, Schellenberg was in the Düsseldorf Gestapo, from where he contacted Berlin and reported on the successful completion of the operation. A few minutes later a truck arrived, and Naujoks was stunned by Schellenberg: from the documents of the wounded lieutenant it follows that Coppens is not really an Englishman, but an officer of the Dutch general staff, his last name is Klop. (In Amsterdam, in order to keep abreast of the negotiations, they decided to assign a spy to the English). Schellenberg grabbed the phone again to be the first to tell Himmler the awesome news: Holland, in violation of its neutral status, together with England, was preparing the overthrow of the legitimate government in Germany! The best result from the operation simply could not be expected.

The Venlo Incident dealt a sensible blow to the Intelligence Service. In addition to undermined prestige both inside and outside the UK, SIS was forced to eliminate or at least preserve its entire network of agents in Western Europe for a long time: Stevens and Best knew too much, the SIS Hague was the second largest European branch of the service after Parisian. It was impossible to neglect the probability of issuing to the arrested enemy all the information they know.

The initial plan to blame the British for an explosion in a Munich beer hall was not realized: Elzer persisted; Hitler did not dare to start a process with such an intractable chief witness. But when, after months of 6, 10 of May of 1940, Germany declared war on the Netherlands, a separate point in the note sent was the charge of the government of the Netherlands for violating neutrality.

The fate of the participants of the "Incident in Venlo"

Lieutenant Klop died in the Düsseldorf hospital. Stevens and Best were sent to a concentration camp. Cherishing the dream of concluding a separate peace with Great Britain, Hitler shored them as possible intermediaries for future negotiations, therefore he rejected all the proposals of the British authorities to exchange British intelligence agents for German agents caught by SIS. The British survived the war and were liberated in 1945.

All the German participants of the “Incident at Venlo” were invited to the Reich Chancellery, where Hitler personally presented each with an award. Schellenberg and Naujoks got class I on the Iron Cross, their career went up sharply.

As for the ordinary performers, all the soldiers of the special squad (12 people) were awarded the Iron Cross Class II, but after the solemn reception of the Fuhrer, their tracks are lost in the gloomy corridors of the Main Directorate of Imperial Security. 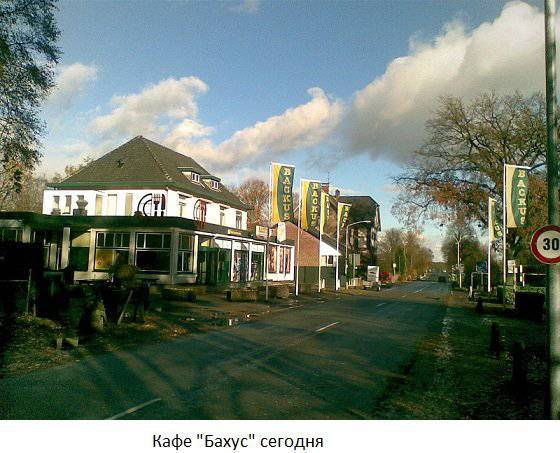 Ctrl Enter
Noticed oshЫbku Highlight text and press. Ctrl + Enter
We are
The man who started World War IISuperman
18 comments
Information
Dear reader, to leave comments on the publication, you must to register.