Between the call and the contract. Young people are asked to make a choice - a year or two years of military service. 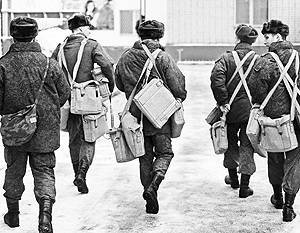 The Ministry of Defense prepared and submitted to the government a draft law on the selection of the term of service. Young people are invited to decide for themselves - or they will serve one year for conscription, or two, but in completely different conditions under the contract. Experts note that there is logic in this decision. But there are drawbacks.

The Russian defense ministry has sent a bill to the government on the selection of service life for conscripts, Deputy Defense Minister Nikolai Pankov said on Friday.

“We gave young people the opportunity to choose whether to serve a conscript for a year or a contract for two years,” ITAR-TASS quoted Pankov as saying.

“We have prepared a draft law, coordinated it with all interested ministries and departments. We also received all the necessary conclusions and conducted a formal examination, ”he added.

Usually, the first contract (for already completed military service) is for three years with a trial period of three months.

As previously reported in the media, a new military service regime was introduced for contract servicemen from 27 in November: from 9.00 to 18.00. In addition, for contractors are going to shorten the term of entry into the mortgage.

Experts are sure that there will be those who wish to sign a contract for two years instead of a year of urgent service.

“But still, in the first six months, these contractors will objectively be in the position of a soldier,” said Viktor Litovkin, executive editor of the Independent Military Review. “Because they will have to master some primary army skills, be trained in a particular specialty.” I am not very sure that they will be immediately accepted to the specialty in which they have already been taught, if there is one at all. ”

And only six months later, according to Litovkin, these people will find themselves in the position of contractors: “This is a strictly regulated time in the service, and they will probably live in a hostel, and have free time, go to the city after work, receive 20 with something thousand rubles a month instead of 2 thousand, which the recruit receives, "- he explained.

Litovkin also added that he was present at the event on Friday, where Deputy Minister of Defense Pankov talked about choosing terms of service for conscripts, and asked the latter a question.

“I asked: will there be an opportunity to enroll in military schools after a year of service? He said that this question is still being worked out, there is no answer yet, ”noted Litovkin.

True, ITAR-TASS gives a slightly different answer to the general: “In my opinion, the young man should work for some time and then go to a military college,” said Pankov, adding that “while doing this, of course, we must take it into account motivation.

Speaking about the advantages of a two-year contract service, Viktor Litovkin noted that the monetary allowance plays an important role here.

“You multiply 20 with something thousand by 24 of a month - a contract soldier will earn that much in two years. We are not all Muscovites and St. Petersburg people. And for the guys from, let's say, the middle band, this will be a good help. I think they will go to serve without much difficulty, especially if after the service they still can’t stop, for example, meeting a girl, ”the expert concluded.

In turn, the coordinator of the public initiative "Citizen and the Army" Sergei Krivenko told the VIEW newspaper that for the time being the idea voiced is only an initiative, but in general there is logic in it.

“All this is connected with the formation of a contract army,” he noted. - By the way, we, human rights activists, have long come forward with the idea of ​​making a contract differentiated. That is, you can offer potential recruits different packages: for example, a contract for a year, for two, for three with different money allowances, different guarantees. This will help to take into account the interests of both the recruit and the Ministry of Defense. ”

At the same time, according to the expert, in the conditions of mixed recruitment of the army in the same military units, conscripts and contract servicemen remain, which leads to violence.

“This happens because people have a very different status and, as a result, a different attitude of the authorities. A person who has signed a contract for three years - he is more important, and a draftee who came for a year - this, as they say, bring-bring, you can kick him, etc. I exaggerate a little, but I want to say that all need to do the same. Including the conscript must sign a contract with the conditions in which he is serving. ”

Krivenko also said that in different countries the situation with the recruitment of the army and contract servicemen is very different. But as an example, he cited Germany, where "there is also a certain scale with different conditions in terms of service life and money allowances."

But the former chief of armaments of the Russian Armed Forces, Colonel-General Anatoly Sitnov, retired, criticized the new initiative of the Ministry of Defense.

“I do not support. I believe that there is a general law for all, there is world practice. And if a decision is made that they should serve, then everyone should serve, regardless of how much money you have, etc., ”he noted. # {Weapon}

According to Sitnova, someone in the new situation will go to the contract, if "he has nowhere to go."

“But I have always negatively reacted to any initiatives on the alternative service and the performance of my military duty. I believe that it is necessary by law to fix one specific period of service without any options. Because any alternative is a loophole to get out of the way, ”he concluded.

Recall that in September it was reported that the Russian military department thought about changing the law “On Military Duty and Military Service” and the possibility for young people to choose how much to serve them: either go to a contract or be called upon.

This proposal provoked some support among public activists and human rights defenders. In particular, on the part of the commission on civil-military relations of the presidential Human Rights Council.

Later, the Justice Ministry checked and did not find anything corrupt in the proposal to choose the term of service in the army.

AiF recalls that the institution of military service under the contract appeared in the days of the new Russia. And from the beginning of 90's, the idea of ​​a full transition to a contract was often discussed in the public space from time to time.

However, in reality, the number of applicants for such a service has never been particularly high.

It was then that the scheme began to be practiced, according to which the soldiers-conscripts, after completing six months of service, were offered a contract for three years, and it was emphasized that the first six months of military service would go to his credit. Thanks to this method, a lot of soldiers were attracted to the contract service.

But then there were difficulties. Many conscripts agreed to the contract solely for the sake of improving living conditions and, at the end of their life, they tried to break it. Secondly, the professional qualities of many such contractors left much to be desired. Thirdly, inflation very soon made the salaries of contract soldiers low, they almost began to leave the armed forces en masse. Influenced their unwillingness to serve and the war in Chechnya.

At the beginning of the new century, with a significant increase in the monetary allowance and the provision of a number of social benefits to contract servicemen, interest in such a service increased again.

And according to the plans of the military, by the year 2017 the number of servicemen in the contract service in Russia should reach the number of 425 thousand people against the current 205 thousand.

However, this group of military personnel still does not satisfy all the needs of the Russian Ministry of Defense.

As head of the department Sergei Shoigu said in November of this year, the Russian army will never be fully contractual.

We add that the conscription system is still preserved in Russia, Israel, Belarus, Kazakhstan, Austria, North Korea and several other countries.

But most of the countries - and this is the trend of the last decades - are being transferred to the contract army. This could include the United States, the United Kingdom, and Germany, which recently announced this, and Ukraine, which refused the call from 2014 of the year. In certain countries, a mixed system is practiced. In particular, it operates during the transition period from a call to a contract army, which, as a rule, has been everywhere for at least several years.

Ctrl Enter
Noticed oshЫbku Highlight text and press. Ctrl + Enter
We are
The action “Military service under the contract is your choice!” In Rostov-on-Don: future contract servicemen, exhibitions and “Russian Knights”
94 comments
Information
Dear reader, to leave comments on the publication, you must to register.