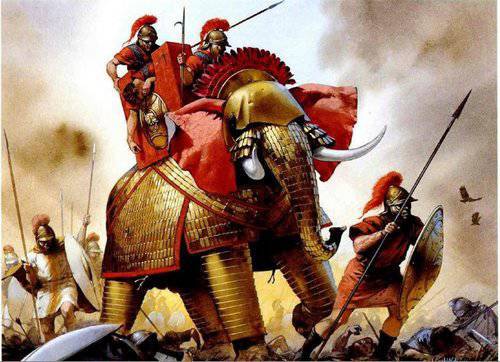 Chariots and war elephants are not in vain called tanks antiquities. In dozens, if not hundreds, of battles, they showed themselves from the very best side and with their appearance alone terrified the enemy troops and caused panic and chaos in its ranks. True, it should be noted that the skillful and coordinated actions of trained infantry significantly reduced the effectiveness of the "antiquity tanks", but this does not underestimate their role in stories.

If you believe the ancient Indian epos and the Vedas, then elephants began to be used for military purposes in the fifth millennium BC. However, scientists from other countries strongly doubt this, and in their opinion, war elephants appeared only at the beginning of the first millennium BC. However, despite such a significant difference in dates, in the description of the battles with their participation, scientists fully agree with the ancient Indian sources.

In ancient India, "tanks of antiquity" were most often used against cavalry. This happened for one simple reason - the horses, barely seeing the giant and unfamiliar animal, became uncontrollable and no longer obeyed the orders of man. On each of the war elephants, as a rule, there were three people: a rider, an archer with a bow (or a thrower of poisoned darts) and a spearman. At that time, as the shooter repeatedly hit the enemy with archery, the spearman did not allow the infantrymen to come close to the belly and legs of the animal.

By the way, the elephant itself also took an active part in the battle. In addition to suppressing the morale of the enemy with his size alone, he trampled on the infantry with his feet, choked him with his trunk and pierced his tusks. It was not uncommon that special iron tips were worn on the tusks, which noticeably lengthened them and made them even sharper and therefore more dangerous.

One of the most striking examples of the use of war elephants on the battlefield is the battle between the army of the Syrian king Antiochus and the Celtic Galatian tribe. The enemy was noticeably superior to the army of Antiochus in numbers, the Galatians were much better armed, and the Syrian king was about to retreat, as one of the advisers suggested using the Indian war elephants that were available against the Galatians. Antiochus agreed. 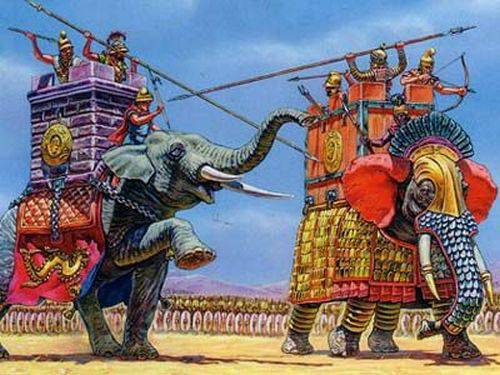 Barely seeing the approaching elephants, the cavalry of the Galatians fled in panic across the battlefield. The marines, being in a real stupor, naturally, could not oppose anything to the “ancient tanks” and were literally trampled down in a matter of minutes. Those of the Galatians, who still managed to escape the fate of being trampled, became an easy target for riflemen on elephants. Antioch himself, in spite of such a triumphant victory, preferred not to recall this battle, saying literally the following: "Can one be proud of the victory, if it is the merit of some animals."

In fairness it is worth mentioning the weaknesses of war elephants. First, in order to have a large number of these animals, it was necessary to take care of their food, and its elephants, of course, required a lot. Their sensitivity to loud sounds can be considered no less bad. It may sound a bit strange, but giant animals, easily trampling both infantry and cavalry, were afraid of the sounds of the forge, drums, etc. It was this lack of them that the great Caesar used during his campaign to Africa in the battle near the city of Tulsa. Frightened and stunned by loud noises, war elephants rushed to their camp, where Caesar's troops followed them.

No less interesting is the story and one more of the “ancient tanks” - battle chariots. The “crew” of each chariot consisted of a charioteer and one or two warriors with bows. Entrepreneurial Persians significantly improved chariots by attaching razor-sharp sickles to the axles of both wheels - this decision turned them into a real thunderstorm for the enemy's cavalry. Chariots at the same time were well used as a maneuverable support for the infantry, so were useful in frontal attacks on the enemy formation.

It was the battle chariots that were the main striking force in the armies of ancient Egypt and the Hittite state, and their presence decided not only the outcome of individual battles, but also the fate of entire states. Thus, it is known for certain that in the battle of Kadesh (1296 year BC) in the armies of Ramses II and the Hittite king Muvatallis there were at least two thousand war chariots on each side. At the very beginning of the battle, the troops of Ramses II were surrounded by a very difficult situation, and only the presence of fast and maneuverable chariots allowed the Egyptians to avoid defeat.

However, as in the case of war elephants, an antidote was soon found for chariots. The sarissas invented by the Macedonians (five-seven-meter spears) made frontal attacks of war chariots useless. The best way this confirms the victory of the Macedonians over the Persians under Gaugamela. The Persians were very much counting on their “fighting vehicles”, but soon they became convinced that their time had passed.

So, as we can see, despite the fact that initially fighting chariots and elephants were practically invincible, soon the necessary tactics were found against them, completely excluding the expediency of their use. At the same time, remembering the glorious times, many Roman commanders used chariots during various celebrations, and in India, to this day, war elephants can be seen at military parades in front of tanks and other modern types of armored vehicles.