Amnesty for non-tied: warm December on 2013

December 6 2013
18
On the eve, the President submitted to the State Duma a bill on amnesty, which is going to coincide with the 20 anniversary of the Russian Constitution. This became known from the press service of the head of state. Beforehand, Vladimir Putin held consultations with Vladimir Lukin (Human Rights Ombudsman) and Mikhail Fedotov (head of the HRC). 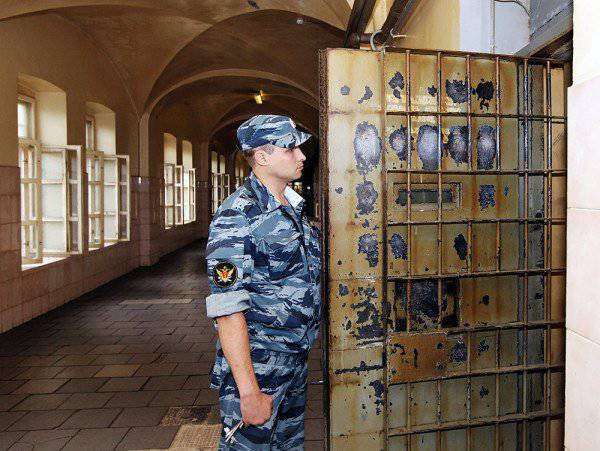 As a result, they came to an agreement that the amnesty should concern only those citizens who are convicted of, if I may say so, non-violent articles of the Criminal Code of the Russian Federation. At the same time, Mikhail Fedotov noted that those who committed crimes without entailing irreversible consequences could be amnestied. At the same time, the head of the Human Rights Council proposed this version of the situation in order to understand who can be amnestied:

If people had a fight and one eye was knocked out to another - these are serious bodily injuries, the new eye will not grow. And, of course, in this case, the amnesty should not be distributed. In the event that they put bruises to each other, yes, amnesty, it should be extended to such cases, because these bruises have long been healed.

In turn, the president noted that the amnesty will apply only to those convicts who have not committed serious crimes and did not use violence against law enforcement agencies (government officials).
Vladimir Putin on the upcoming amnesty:

She (amnesty) should emphasize the humanism of our state, but in no case should lead to relapse and not encourage new crimes, giving anyone the impression that it is possible to commit a crime, an offense today, and tomorrow to expect forgiveness from States and you can create anything.

The draft “jubilee-constitutional” amnesty gave the experts a reason to talk about completely different scales of amnesty. Some people are sure that in the near future no more than 10 of thousands of convicts may be amnestied, others are inclined to see completely different numbers - up to 100 of thousands of people. Such a range of opinions can be explained by the fact that it is still not completely clear how clearly the state humanism mentioned by the president will be underlined, and how many convicts will be considered as not committing serious crimes, including attacks on government officials.

The full version of the bill on amnesty, dedicated to the 20 anniversary of the Constitution, can be found, for example, on page Party, which is one of the initiators of the bill - the Liberal Democratic Party. Only in this case it is necessary to take into account that this bill was proposed as early as August of the current year, and since then, as they say, a lot of water has flowed under the bridge. Therefore, one should not expect that the amnesty will be held according to the version proposed by the liberal democrats, as they say, to every comma.

After discussing the possibility of an amnesty for persons who were not convicted under articles related to serious crimes, the version of who could soon be released was showered. In the first place, which, in principle, one could have expected, they started talking about a possible exit from the places of imprisonment of the main “beacons” of what has been called democracy. This, of course, "prisoners of the Marsh business" and representatives of the group Pussy Riot.

However, after some analytical calculations, the same gentlemen, who had already seen a string of “bogs” returning to their usual life, were forced to take their words back. The fact is that the president knowingly made a note that the amnesty will not affect those who have taken violent actions against the law enforcement agencies. Indeed, if you “scroll the tape” back, you can see that the main purpose of the speeches of the “swamp” protesters was precisely a provocation against the police officers. Many people remember the cases of pieces of asphalt flying in law enforcement officers, strikes with metal rods on the heads of policemen, who had previously been removed helmets, and everything like that. The protesters themselves willingly laid out their videos on the Web, hoping to get the ovations of the “democrats”. Applause from the main ideologues, sponsors of the protests and their supporters received, but along with them and the evidence base against themselves. The irony of fate, but it is these frames today that are the link that is unlikely to allow all, without exception, "Bolotnaya Prisoners" to be on this side of the grid.

But the vociferous (in all respects) girls from PR can more fully change the bunk to home beds. Under the amnesty, they seem to be suitable (well, if, of course, there are no personnel on which some Tolokonnikov bites the policeman by the finger during the arrest ...). And in this case, an interesting effect may manifest itself: thanks to the PR and compassionate sponsors of the "punk band", God forgive me, the girls will clearly become claim to the title of such new martyrs of the "regime". They are claiming him even now (they won over Oscar), but after the release of the amnesty, new trills will begin - about how they, “weak” and “vulnerable”, strengthened in their struggle with the authorities in “the dungeons of the regime ”, And are ready to make a new democratic torch. The hyperliberal approving hubbub will rise - do not go to the fortuneteller ... Weeks of two or three violent orgasms of the “democratic” editions are provided ... What's next? Well, then either new sponsorship projects in the same style, or an accident ... And the chances of 50 on 50.

Such a figure as Mikhail Khodorkovsky can be included in the amnesty. In 2005, Khodorkovsky was convicted of fraud and other economic crimes. In the so-called “second Khodorkovsky case”, the ex-head of Yukos and his associate Platon Lebedev were convicted in 2010 of the year under articles 160 and 174 of the Criminal Code of the Russian Federation (“Assignment and waste” and “Legalization (laundering)” acquired by other persons in a criminal way ", respectively). It is interesting here that after all appeals and appeals, the term of Khodorkovsky and Lebedev was reduced, and even if there is no amnesty for them (which is unlikely), both will be released next year (Lebedev - in May, Khodorkovsky - in August).

However, a possible amnesty for Khodorkovsky, Lebedev, PR, or “bogs” is, of course, interesting, but the situation with state and near-state embezzlers looks like a lot more interesting - corrupt officials, which cause special resonance, which is called here and now. First of all, this is the case of Oboronservis. Obviously, Dmitry Mityaev, the acting director of the Mira company, who was sentenced to 2 years and 8 months in prison last summer, will be released. Much more vague is the case with other defendants. Theoretically, the amnesty could fall, for example, Sergey Khursevich - the former head of Oboronservis. But the snag is that Khursevich was not convicted. A criminal case was initiated against him, but there was no final court decision on this case. The updated draft of the amnesty states that a person can be released from criminal prosecution if he admits his guilt. Khurssevich does not admit his guilt, but, as in an interview with Interfax, a certain law enforcement source informs, the former head of Oboronservis has already been informed that he can go free if he admits guilt. Now everything depends on Hursevich himself.

It turns out that for exactly the same reasons, such citizens as, for example, Anatoly Serdyukov and Yevgeny Vasilyeva, may also get amnesty. Another question is: do they need it? .. Then, too, they will have to admit their guilt, and this is a precedent, as they say, “a stain for the rest of my life.” It can be assumed that these subjects will not recognize their guilt exactly, but will wait for the court to fully justify it. And after all, there is an opinion that they can wait ... And, considering what article the same Serdyukov is accused of today, and the fact that, according to some information, they are not going to change the article about negligence to a more rigid one in his regard, ex-minister blame and not at all. The case with the construction of the road to “Zhitniy” is a long-standing one, and the deadline has already expired - in general, time heals without any amnesty ...

Ctrl Enter
Noticed oshЫbku Highlight text and press. Ctrl + Enter
We are
Situational analysis of the death of the MH17 flight (Malaysian Boeing 777), made on the basis of engineering analysis from 15.08.2014Red amber rag and khaki love
18 comments
Information
Dear reader, to leave comments on the publication, you must to register.