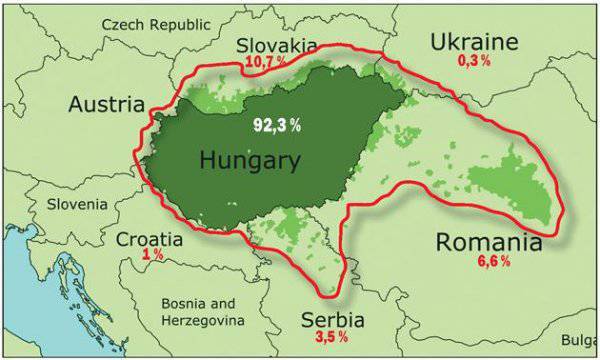 The activity of Budapest in the Ukrainian direction is becoming increasingly noticeable. Hungary is interested in Transcarpathia, where the Hungarian ethnic minority numbering more than 150 000 people (12% of the population of the Transcarpathian region) lives compactly, more than 90% of whom consider Hungarian as their native language.


I remember the beginning of 1990's, the stupid delight of a part of Ukrainian society about independence. Ukraine very quickly found itself face to face with geopolitical challenges that no one dared to quit while it was part of a more powerful state entity - the Soviet Union. The date of proclamation of Ukrainian independence is the starting point from which the western neighbors of Ukraine began to look closely at the territories of the former Ukrainian SSR with special interest: Romania wanted Bukovina, Hungary - Transcarpathia. And while the Ukrainian nationalists fought against the “Moscow threat”, Kiev suffered all territorial losses in the western direction ...

Budapest needs Transcarpathia to have a minimum of cultural and other ties with the rest of the Russian world. Here, part of the work for Budapest was carried out by Kiev, who set the course for constructing a knowingly weak, external education-responsive education called the Ukrainian state, in which the “Ukrainian” is proposed to be understood as something that has nothing in common with Russian culture and the Russian world. In Kiev, they don’t like to remember that Transcarpathia was formerly called Ugrian Rus.

Against the background of Hungary’s overall activity in Transcarpathia, the activities of the Hungarian radical Jobbik Party stand out, which at the end of October of this year held its political forum in Beregovo (Transcarpathian region). Among the participants of the forum were the party leader Gabor Von, euro-parliamentarian Beila Kovacs, the head of the party cabinet of the national policy Istvan Savoi.

There were promises to achieve greater funding for educational institutions with the Hungarian language of instruction in the Transcarpathian region, and Beila Kovacs (he, by the way, has his office in Beregovo) stressed that Kiev will only be able to sign the Association Agreement with the European Union the basics of language policy and ... the creation of the Pritisna administrative district as part of Transcarpathia, which should consist of settlements with a predominantly Hungarian population. The Hungarian guests did not forget to visit the monument on the Veretsky Pass, established in honor of the 1000 anniversary of the transition of Hungarians through the Carpathians. It is noteworthy that the guests from Budapest, meeting with the Transcarpathian Hungarians, held talks with representatives of the Roman Catholic, Greek Catholic and Protestant communities, but did not even think to meet with the Orthodox. This selective approach clearly indicates the vector of pressure of Hungary in the extreme west of Ukraine - to make Transcarpathia more Catholic, more Protestant and less Orthodox.

Scoring points on the Hungarian theme was also decided by the not less radical than Jobbik, the Ukrainian party Svoboda. Anatoly Vitiv, a deputy from Svoboda, condemned the visit of Gabor Vona and his colleagues to Transcarpathia, reminded the Hungarians that in 1939 they, having enlisted the support of Hitler, eliminated the Carpathian Ukraine. Ban A. Vitiv forgot only to add that Carpathian Ukraine also appeared thanks to the support of Hitler.

Today in Ukraine there are two major Hungarian political parties - the Democratic Union of Hungarians of Ukraine and the Society of Hungarian Culture of Transcarpathia, which are in close contact with curators from Hungary. In addition to them, there are several organizations at the regional level, working in the fields of culture, pedagogy, in the social sphere. There are national Hungarian theaters, schools, colleges, etc. The Hungarian presence is felt in the far west of Ukraine at all levels of local life - from school to politics, not to mention the fact that around 40 settlements of Transcarpathia regained Hungarian names.

In fairness, we note: Transcarpathian Hungarians have reason to be displeased with Kiev. Having embarked on breaking all the minorities “through the knee”, forbidding them to get education in their native language and putting them under the press of total Ukrainization, Ukrainian officials did not calculate the reaction to the nearest neighbors of Ukraine to such actions. The neighbors waited patiently for Kiev to clear the cultural sphere of the Russian element, and then filed their weighty voice. Transcarpathian Hungarians (as well as Bukovina Romanians and Crimean Tatars) now demand not only the right to receive education in their native language, but also their quota in the local authorities. At the same time, Hungary (like Romania and Turkey), being a member of NATO and complying with its policy of “expanding” this military bloc to the east, exerts unceasing pressure on Kiev, seeking to satisfy the demands of its fellow tribesmen.

Here it must be emphasized that the ideological, cultural and political split of Ukraine fully meets the interests of the European Union. It is easier to swallow a Ukraine (or more precisely, European atlantists) cut into pieces by Ukraine. The weaker the link between the regions and the center, the easier it is to make agreements with the regions without taking into account the views of the central authorities, the easier it is to remove whole pieces of Ukrainian territory from the administrative and legal influence of Kiev.

In the meantime, at the meeting with Oleg Tyagnibok, the Hungarian ambassador to Ukraine, Michal Baer, ​​assured the leader of the Svoboda party that Budapest fully supported Kiev’s European integration aspirations. In turn, “schiriy patrіot” Tyagnibok stressed the importance of Ukrainian-Hungarian cooperation in the diversification of energy supplies to Ukraine (10% of gas Kiev imports from Hungary). M. Baer also assured that the Hungarian diplomats are ready to provide consulting services to Ukraine after signing the Association Agreement with the European Union.

The independence of Ukraine, in which the ideology of the Uniate Bandera is taken as a model, is seen by the Euro-Atlanticists as a tool to undermine the geopolitical balance in Eurasia. And Budapest needs Ukraine’s independence and its rapprochement with Brussels as part of the Hungarian project to separate Ukraine and the rest of the Russian world. Drifting alone Ukraine, looking to Europe with a pleading look, Hungarian nationalists will be easier to persuade to meet their demands.

Ctrl Enter
Noticed oshЫbku Highlight text and press. Ctrl + Enter
We are
Transcarpathia may follow the Crimea and the DonbasCarpathian geopolitics of Hungary: the collapse of the Ukrainian statehood gives a rare chance
115 comments
Information
Dear reader, to leave comments on the publication, you must to register.